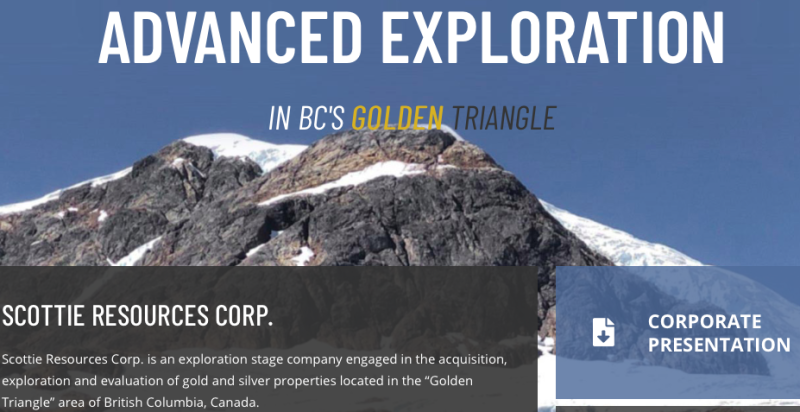 Yet, these historical results barely scratch the surface of a newly expanded land package consisting of two substantial contiguous claim blocks in one of the hottest parts of the red hot GT. Since my interview, gold is up ~$220/oz. to $1,515/oz., but Scottie Resources’ share price is down 31% to C$0.145. Both of Scottie’s sizable, contiguous land packages share borders with Ascot Resources (AOT.V). {see map below}. 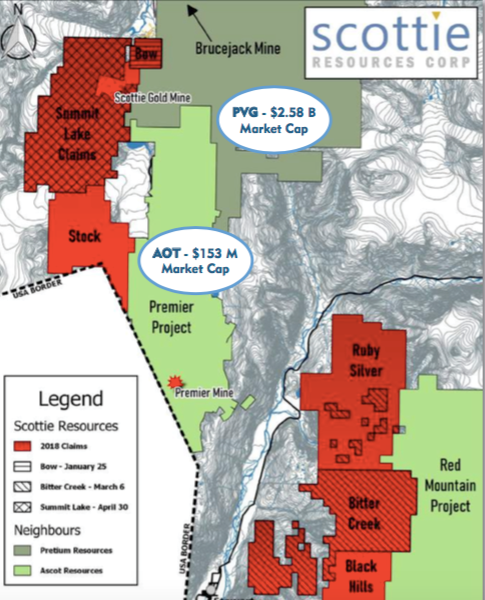 CEO Rourke and team believe their company is worth considerably more than its enterprise value [market cap + debt – cash] (“EV“) of C$9.1M = ~US$6.9M. {see corporate presentation}. Scottie is trading at a 92% discount to the average of EVs of GT Gold (GTT.V), Ascot and Tudor Gold (TUD.V).

Admittedly, those companies warrant significant premiums. For one thing, they have a lot more drill results in hand. However, neither GT Gold nor Tudor have delivered maiden resources on their primary Golden Triangle properties.

Ascot has 3 or 4 projects on its combined 25,164 hectare holdings, including the recently acquired IDM Mining & Silver Coin properties. They want to produce from multiple mine sites, feeding a central mill. Ascot’s CEO recently said that he thinks AOT could reach production by the end of next year. That would draw a lot of attention to Scottie, look at the map!

To be clear, Scottie has a lot more drilling to do before it can provide line of sight to a meaningful high-grade resource. 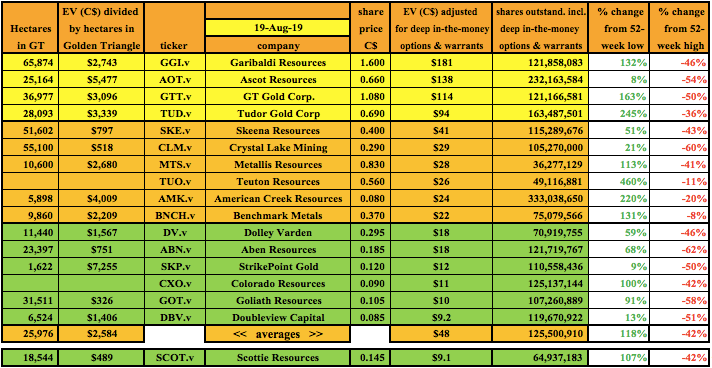 There’s reason to take Scottie’s CEO and new full-time VP of Exploration seriously when they brag about their properties being situated in a top location in the Triangle. Two of the very best geologists working in the region, JoAnne Nelson & Jeff Kyba, said the following in this 2014 British Columbia Geological paper:

“One of the most important mineral trends of northwestern British Columbia extends from near the town of Stewart north to the Treaty Glacier, in the western part of the Stikine arc terrane. Major deposits along this trend include KSM (Seabridge Gold), Brucejack, (Pretium Resources), Silbak-Premier, Big Missouri & Red Mountain (Ascot Resources) and Scottie Gold (Scottie Resources).”

Scottie Resources offers a compelling risk-adjusted investment opportunity. Look no further than the gold price. It was at ~$1,295/oz. the day my CEO interview was posted. Earlier this month it smashed through $1,500/oz., and is now at $1,515/oz. Gold is at a 64-month high! 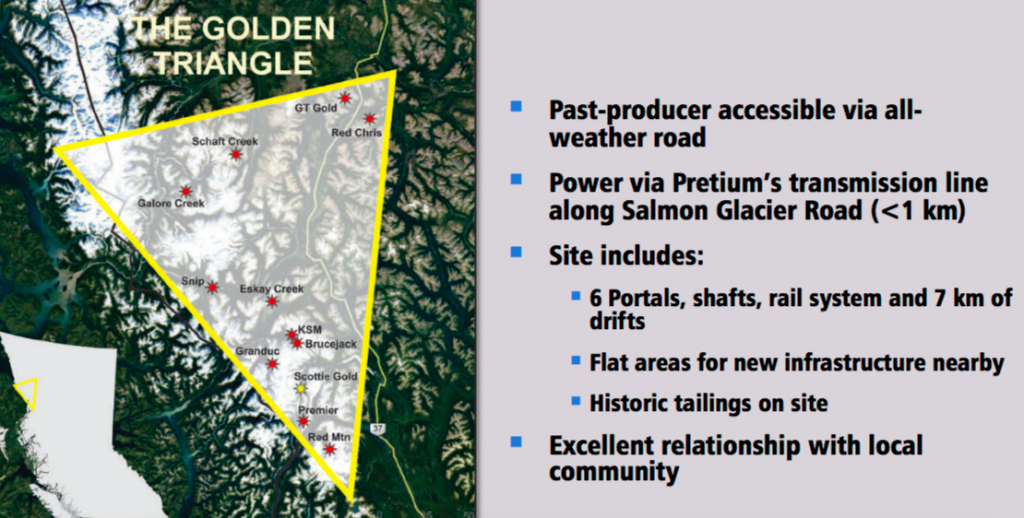 On August 20th, the company announced that 2,000 meters, in 12 holes, split between the Scottie Gold mine and Bow properties, will start by mid-September. The program is designed to follow up on, and step-out from, historic near-surface high-grade intercepts at Bow. And, assess a newly discovered zone on the Scottie Gold property recently exposed from glacial retreat.

Thirteen gold-bearing vein zones have been identified between the contiguous Scottie Gold & Bow properties, but mine production was primarily from a single vein (the M-zone). {see image below}.

All intercepts reported above are true widths and are located at vertical depths of less than 45 m. No drilling has tested mineralization below 55 m in vertical depth. Management believes that the near-surface, high-grade veins pinch & swell, meaning that mineralization could be open at depth. Results are expected in late October.

“Based on the historical drilling & extensive fieldwork over the last 2 years, the initial drill program is designed to expand & confirm the geometry & continuity of high grade gold zones. The 2019 fieldwork & drill program will lead to a larger, more targeted exploration program on the Scottie & Bow properties, as well as our newly acquired Summit Lake claims in 2020.” 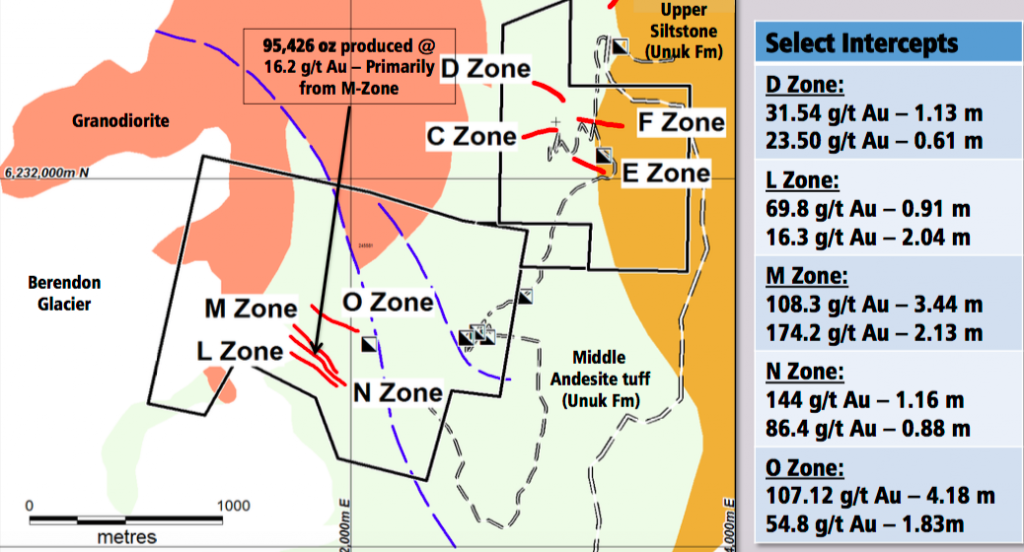 180K tonnes of tailings could be monetized starting next year

I estimate Scottie has 9-10,000 ounces of gold contained in tailings. Monetization of this valuable asset could start as soon as next year. Both the economics of the proposed operation and the ability to fund start-up costs have dramatically improved. The in-situ (in-the-ground) value of 9,500 ounces would be twice Scottie’s EV of C$9.1M. These ounces are above-ground, they’ve already been mined!

Many GT juniors have rallied, some have soared, along with the gold price. In the past three months, Garibaldi (GGI.V), Tudor, American Creek (AMK.V) & Teuton (TUO.V) are up an average of 174%. By contrast, despite having secured nearly 5,000 additional hectares in the heart of the GT, Scottie’s share price is down 31% from $0.21 to $0.145.

In comparing Scottie Resources to other GT juniors, it’s hard to explain why the company is valued the way it is. Consider Tudor Gold, with an EV of $94M. It’s more advanced project, Treaty Creek, is about 18,000 hectares in size. However, Tudor owns just 60% of it, and they are free-carrying 2 juniors, (20% each).

Is 60% of Treaty Creek, (+ three far less important properties), worth more than 10 times Scottie’s two contiguous blocks totaling 18,544 hectares? I think the huge valuation gap between Tudor & Scottie will shrink as more investors look at relative value in the GT. Scottie has tremendous resource expansion & discovery potential at depth, from additional zones along strike, and in parallel mineralized structures. 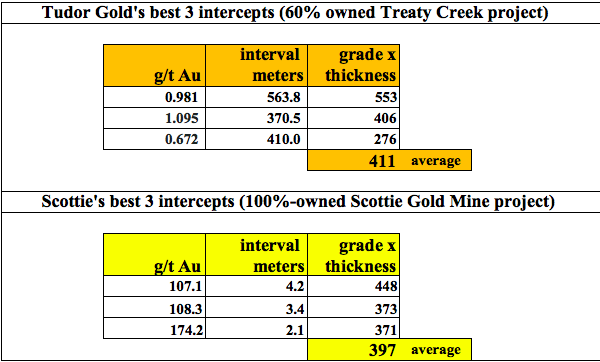 M&A in the Golden Triangle likely to soar

With gold above $1,500/oz., M&A in the GT is likely to pick up. I believe that transactions will shine a favorable light on Scottie Resources. Majors including Newmont Goldcorp, Newcrest Mining, Teck Resources and Kinross Gold are either active in the GT or thought to be interested in entering the district.

Any of those players, with an average EV above $20 billion, could look to acquire companies like Pretium (Brucejack), NovaGold (Galore Creek) or Seabridge (KSM). In addition, Pretium, NovaGold & Seabridge in turn, could have their sights on Ascot, GT Gold & Tudor. And, the latter three could be interested in some of the remaining 13 names on my chart — juniors with EVs ranging from $9M (Scottie) to $41M (Skeena Resources).

Scottie’s property size is 5.3% of the total hectares listed in the chart, but its EV is just 1.2% of total EVs. Therefore, if each hectare were equal in terms of ownership tenure, proximity to infrastructure, depth of deposit, geology, grade, etc., Scottie would be significantly undervalued.

The Golden Triangle is world famous, known for high & super-high grade gold deposits, but it can be very expensive to explore there. Drill programs can only be done 4 or 5 months out of the year. A strong gold price is incredibly helpful. As capital flows into the GT, infrastructure gets built for the good of many and M&A attracts a lot more attention & investment to the area.

All of this is great news for well positioned GT juniors, but especially for Scottie Resources. Unlike several peers, Scottie’s share price has not moved significantly higher with the gold price. It owns or controls a sizable 18,554 hectares (a larger footprint than 6 peers on the chart), in two contiguous blocks in a great location. Scottie, with its small EV, is, or will be, a prime takeout target by a growing number of prospective suitors.

Readers interested in investing in the Golden Triangle, should consider taking a closer look at Scottie Resources. In addition to filings on Sedar, the company has an excellent corporate presentation. And, here are the latest press releases.

Disclosures: The content of this article is for information only. Readers fully understand and agree that nothing contained herein, written by Peter Epstein of Epstein Research [ER], (together, [ER]) about Scottie Resources, including but not limited to, commentary, opinions, views, assumptions, reported facts, calculations, etc. is not to be considered implicit or explicit investment advice. Nothing contained herein is a recommendation or solicitation to buy or sell any security. [ER] is not responsible under any circumstances for investment actions taken by the reader. [ER] has never been, and is not currently, a registered or licensed financial advisor or broker/dealer, investment advisor, stockbroker, trader, money manager, compliance or legal officer, and does not perform market making activities. [ER] is not directly employed by any company, group, organization, party or person. The shares of Scottie Resources are highly speculative, not suitable for all investors. Readers understand and agree that investments in small cap stocks can result in a 100% loss of invested funds. It is assumed and agreed upon by readers that they will consult with their own licensed or registered financial advisors before making any investment decisions.

At the time this article was posted, Peter Epstein owned shares of Scottie Resources, and the Company was an advertiser on [ER].

Readers understand and agree that they must conduct their own due diligence above and beyond reading this article. While the author believes he’s diligent in screening out companies that, for any reasons whatsoever, are unattractive investment opportunities, he cannot guarantee that his efforts will (or have been) successful. [ER] is not responsible for any perceived, or actual, errors including, but not limited to, commentary, opinions, views, assumptions, reported facts & financial calculations, or for the completeness of this article or future content. [ER] is not expected or required to subsequently follow or cover events & news, or write about any particular company or topic. [ER] is not an expert in any company, industry sector or investment topic.