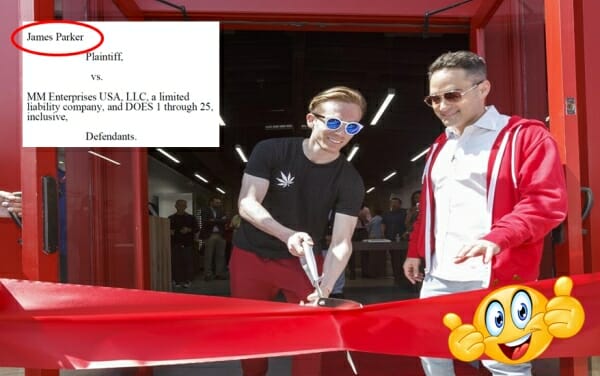 If you’ve every tried suing someone who is insolvent, you know how frustrating that can be.

Although there is an ominous black hole where news of the MMEN’s profitability might be, the August 13, 2019 release indicates that oceans of cash are flowing into the dispensary tills and there are institutions still willing to fund future expansion.

That’s good news for early MMEN investors, Brent Cox and Omar Mangalji who sued MMEN after $179 million dollars worth of shares got locked up by MedMen CEO Adam Bierman and President Andrew Modlin who control most of MedMen’s voting shares.

The cash sloshing around is also good news for MMEN’s ex-CFO James Parker who is suing MMEN claiming that Bierman and Modlin called him “fat and sloppy”, a “pussy-bitch” and also referenced L.A. City Councilman Herb Wesson as a “midget negro” and a rep. of the Drug Policy Alliance as a “fat, black lesbian” and various female foes as “cunts.” 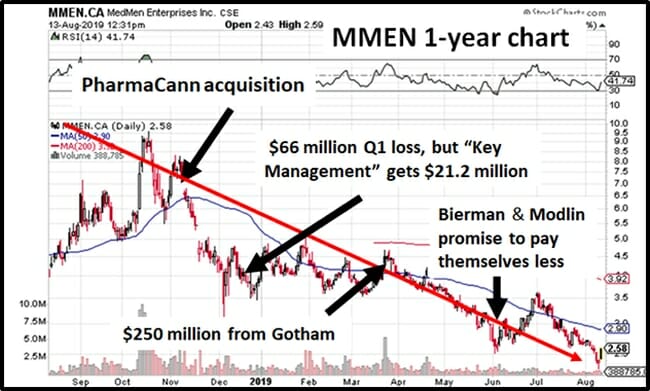 The share-price carnage was no surprise to attentive Equity Guru readers.

On May 28, 2018, Equity Guru principal Chris Parry dug into the company’s financials and revealed the mass-castration of MMEN shareholders.

The greediness that Parry unearthed foreshadowed a pattern of MMEN execs using the company as an ATM, and generally acting like assholes.

Let’s get back to those exciting revenue numbers.

So, it appears that MedMen is pretty good at selling pot.

California is a particular bright spot.

MedMen’s 11 operational retail locations in California reported a combined USD $27.4 million (CA$36.2 million) in revenue for the fourth quarter, an increase of 10% sequentially. Revenue by quarter for Fiscal 2019 is summarized in the table below. 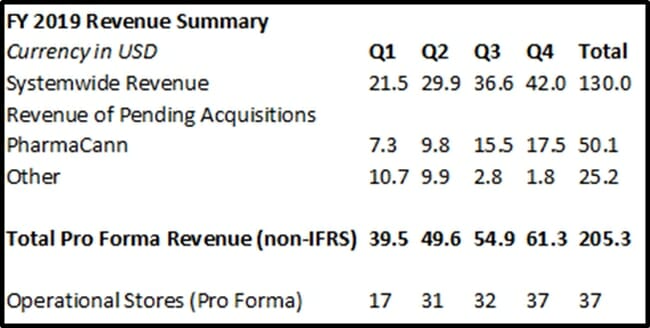 “Throughout 2019, we broadened our geographic footprint through strategic acquisitions,” stated Bierman, “Following the closing of pending acquisitions, we will be licensed for up to 92 retail locations across 12 states, and there is tremendous opportunity ahead to turn the balance of our retail licenses into revenue-generating storefronts.”

MedMen says that it is “now on track to reduce its run-rate corporate SG&A expenses by 30% by the end of the September 2019 quarter, to approximately USD $115 million on an annualized basis going forward.”

Key drivers of the decrease in corporate SG&A expenses include: 1. general corporate cost savings, 2. strategic headcount reductions across, and 3. elimination of non-core functions and 4. Reduction in overhead.

“With a new CFO and reiterated guidance to reduce SG&A by 20% in q4 2019,” stated BigChungus on an investor bull-board, “The company can regain investors confidence if they begin to demonstrate cost reduction.”

“There appears to be a new discipline at MMEN,” stated Campst, “This seems to have coincided with the hiring of the new CFO.”

Enthusiasm from other parties was more muted.

The newly appointed IR firm ADDO promises to “craft MedMen’s story in a way that resonates with the Street.”  ADDO’s services include “high touch IR support.”

MedMen is relaunching its investor website, with an “updated version of the corporate presentation”, featuring details of its “path to profitability”.

If you are a pure numbers-only investor, that “path to profitability” (if it exists), is the main thing you should focus on.

SRI investors shun companies involved in “pornography, weapons, gambling, and tobacco,” while demanding that “leadership be held accountable for its actions.”

The boardrooms of publicly traded companies are seldom populated with angels.

But in this dodgy environment, MedMen CEO Adam Bierman and President Andrew Modlin stick out for being such spectacularly greedy, shitty people.