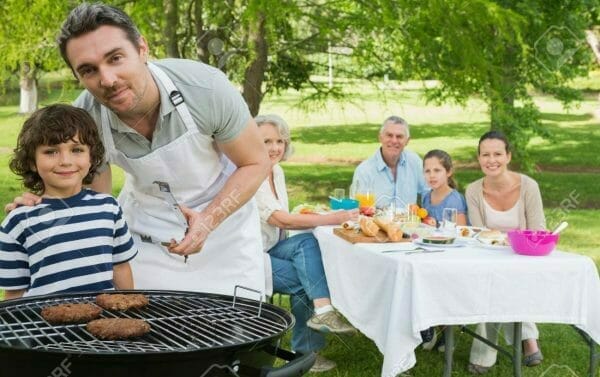 Beyond Meat’s (BYND.Q) competition is heating up

Barbecue season is in full swing, and that means beer-swilling middle-aged men in aprons printed with Dad jokes engaged in the time-honoured tradition of turning raw meat into black lumps of moderately chewy charcoal.

Except that we’re living in a time when traditions are routinely getting shit on. The personal is political as they say, and food is a hotly debated topic in polite company. Now instead of everyone lining up for their burger or smokie, more people are turning away because of fad diets built on a bedrock of virtue signalling and social consciousness.

But the environmental ninnies have a point: Raising cows means more methane in the atmosphere, and methane is a greenhouse gas. Greenhouse gases contribute to climate change. Something should probably be done about this or we’re all likely going to die, and nothing makes for a bigger market opportunity than the impending doom of our species.

That’s why companies like Beyond Meat (BYND.Q) are making a killing. We started writing about Beyond Meat earlier this year when they were a $7.5 billion market cap. Now they’ve doubled that at $14.1 billion and have shown no signs of stopping. 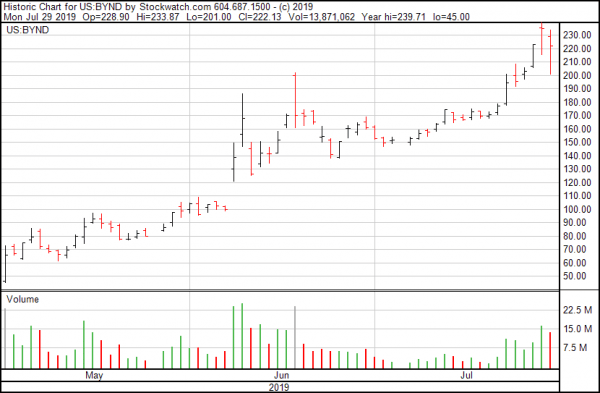 But Beyond Meat’s got some stiff competition coming and that’s going to be a large hassle for them in the future. Why? Because there’s nothing about Beyond Meat’s patties that give them a competitive edge. Right now, they’re the top dog, but with a product that’s easily duplicated.

Companies with staying power have a strong moat that wards off attempts to imitate, replace and ultimately saturate the market. So while we wait to see whether the melting polar icecaps are going to give us primo waterfront property within the next decade or so, here are five companies we can invest in right now to get on top of this burgeoning market and maybe make some money. 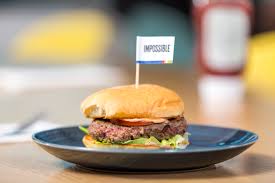 Impossible Foods was founded by Pat Brown, a Stanford biochemist, back in 2011.

While on a sabbatical year from Stanford, he got involved in solving the problems associated with using animals to produce food. He organized a conference to raise awareness for the problem but it had little effect, so he made a full pivot to take the problem on using good old-fashioned capitalism as his weapon, this time creating a product to compete in the free market.

Here’s what people on the internet are saying about the Impossible Burger:

this hospital cafeteria has the impossible burger, damn i might fuck around & break my leg later idk pic.twitter.com/IlJolgVIBz

Someone should tell Molly that the company has been working with fast-food joints like White Castle and Burger King. Might be able to save her some medical expenses.

Best get yours soon, because apparently the demand is so high on these burgers that they’re at risk of running out of meat.

Beyond Meat still has a competitive edge here because their food can be found in the meat aisle of your local grocery store, and Impossible Foods hasn’t quite made it there yet. 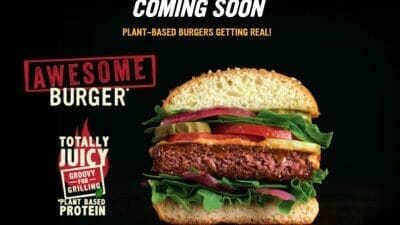 The Awesome Burger is the creation of Nestlé (NESN.SIX) subsidiary Sweet Earth. The burger is made from yellow peas and wheat and the company says it’ll have realistic juiciness and taste, and also be healthier than Impossible Burger and Beyond Meat.

For example, it’ll have six grams of fibre versus the three found in Beyond and Impossible patties, and will also include more protein (28g rather than 20g), no saturated fat and more iron and vitamin C than its competitors.

The burger is not Nestle’s first attempt at entering the plant-based burger market. The company launched a soy- and wheat-based burger in Europe in April. The Awesome Burger isn’t available in North America right now, but you can get one at McDonald’s in Germany under the name the Incredible Burger.

“These new burgers don’t compromise on flavor, texture, and cooking experience. They underline Nestlé’s increased focus on tasty, authentic plant-based food. … We believe this trend is here to stay, as consumers look at different ways to enjoy and balance their protein intake and lower the environmental footprint of their diets,” said Wayne England, the head of Nestlé’s food business.

Here’s a review of the Incredible Burger (don’t worry, it’s not in German): 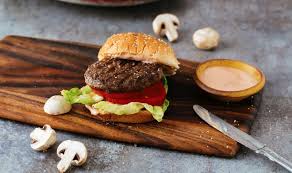 Applegate Farms, a subsidiary of Hormel Foods (HRL.NYSE), has tried to meet the new veggie craze halfway by introducing The Great Organic Blend Burger. It’s a beef or turkey burger that incorporates white button mushrooms straight from a Pennsylvania family farm into their patties.

It’s available at retailers including Kroger, HyVee, Sprouds and HEB.

The company claims that their burger has 45% less fat and 35% fewer calories than regular all-beef burgers. Based on USDA data, a regular ground-beef burger has 380 calories and 34 grams of fat per serving.

“There are more and more consumers who are looking to incorporate more plants and vegetables into their diets. It’s a solution that works well for those consumers without a big compromise on taste. It’s a big step forward for us in continuing to look for smarter ways to make food from animals and plants,” said John Ghingo, president of Applegate Farms.

Still, it makes one wonder why not just put mushrooms on your burger? 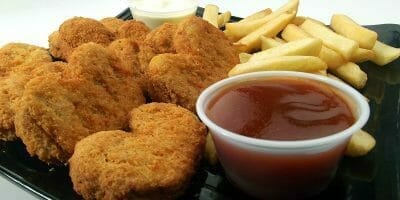 Sometimes burgers get a little tiresome and the cravings turn on for something else, like, say, chicken nuggets. They’re often greasy, sometimes far too dry, and when you open the box and look down at those little balls of orange-battered coronary, you wonder what the hell you’re doing with your life, but that first bite is divine.

If Raised and Rooted, a Tyson Foods (TSN.NYSE) subsidiary, can duplicate that first opening taste with their pea-based faux-chicken nuggets, they will be on the way towards crowning themselves the kings of the not-meat crowd.

The nuggets have 30% less saturated fat than traditional meat and five grams of fibre, while the burgers guarantee 60% less.

Raised & Rooted is not the first of the corporation’s numerous brands to offer plant-based products. Aidells currently features all-natural sausage and meatballs composed of blended chicken and plant proteins. 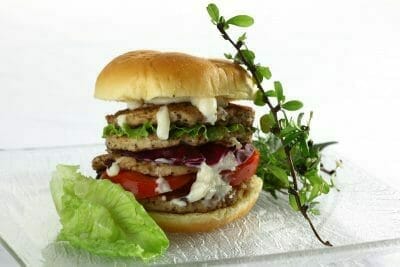 Whole Perfect Food’s story began in 1993 in Shenzhen, China. They’re a plant-based meat manufacturer that boasts sales of 300 million yuan (USD$44.6 million). Their founder, Yu Zhaode, is a Buddhist with religious exemptions towards certain foods, such as meat or pungent vegetables like onions, garlic, scallions, chives and leeks.

The company offers more than 300 products, including faux oyster sauce, bacon, hamburger patties and abalone among others, and anticipates competing for market share in this new and emerging market.

With food choices dating back to the Song dynasty, China’s traditional vegetarian recipes use tofu to make fish or konjac to make shrimp. The company uses seaweed protein to make vegan seafood.

“Consumers and media don’t know about us because we don’t have the star power of the Western start-ups, which get investors like Hong Kong businessman Li Ka-shing and Bill Gates. We do three to 50 new product research [studies] every year, and have accumulated many patented technologies. This year, together with government officials, we set up a national-level research institute at Shenzhen University for soy protein isolate and other plant-based products,” said Zhou Qiyu, senior marketing manager.