It’s ironic (in a bad way) that CannTrust (TRST.T) has the word “trust” embedded in its name – because that concept is now flushed down the toilet.

If you’ve ever tried to retrieve a treasured item from the sewer, you’ll know the reclamation project won’t be easy.

“We dodged some bullets,” Mr. Lee wrote. “[Health Canada] did not ask about RG8E/W, which are unlicensed rooms currently full of plants.”

Mr. Lee may as well have released a raven with a note tied to its foot that said, “The police are here but they haven’t found the dead body in the freezer yet!”

Unfortunately, the raven was intercepted.

Chairman Mr. Paul responded to Mr. Lee: “We need to clearly point out that we have been diligent in submitting the applications for each new area and they have been slow in responding.”

Perhaps there are narrative nuances not revealed in the exposed emails, but what Mr. Paul appears to be saying is: “We did apply for a grow license, and then waited a reasonable amount of time for Health Canada to approve. So – who can blame us for charging ahead?”

At any rate, CannTrust shareholders will be shitting themselves over today’s Globe & Mail business section headlines. 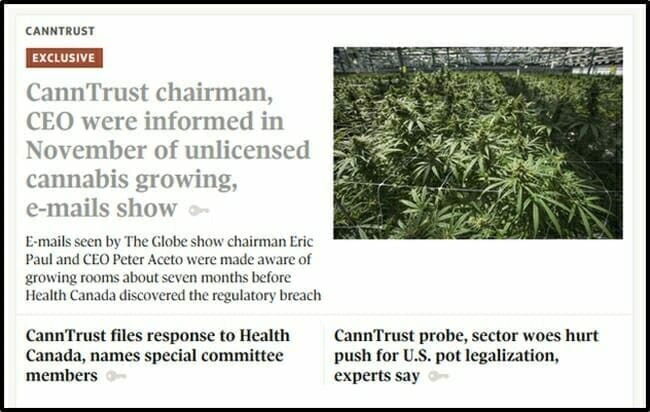 “Both the chairman and the CEO of CannTrust were informed that the company was growing cannabis in unlicensed rooms about seven months before Health Canada uncovered the regulatory breach, internal e-mails show,” stated the Globe & Mail.

The company communications, seen by The Globe and Mail, show chairman Eric Paul and CEO Peter Aceto were made aware that cannabis was being cultivated in rooms at a growing facility in Southern Ontario that had yet to be licensed by the federal regulator, and that Mr. Paul counselled staff on how to respond.

In an e-mail dated Nov. 16, 2018, Graham Lee, CannTrust’s director of quality and compliance, informed Mr. Aceto and other top executives about a Health Canada inspection that had just been completed. It had revealed several compliance breaches but missed the plants growing in unlicensed rooms.

“Although serious, on their own, each of these can be talked through with [Health Canada]. The concern is that together they will paint a picture with the regulator of a company not in control. We have dodged observations for items 1 and 6 despite having HC [Health Canada} in the building,” Mr. Lee wrote.

CannTrust’s Pelham facility was found to have been used to cultivate roughly 5,200 kg of cannabis in five unlicensed grow rooms. Health Canada has prevented the company from selling this product until the investigation is complete and compliance has been re-established.

Management issued a statement saying they would place a voluntary hold on 7,500 kg of cannabis at its Vaughan manufacturing facility, exceeding Health Canada’s required amount, until a remedy is found.

“The dead cat bounce, when a company has a day of green following a substantial fall as folks take a stance that it dropped too hard previously, is a real thing,” wrote Parry.

“My suspicion is, Health Canada will use this most recent corner cutting by TRST as a teachable moment for other LPs,” continued Parry, “and when that happens, there will be no warning.” 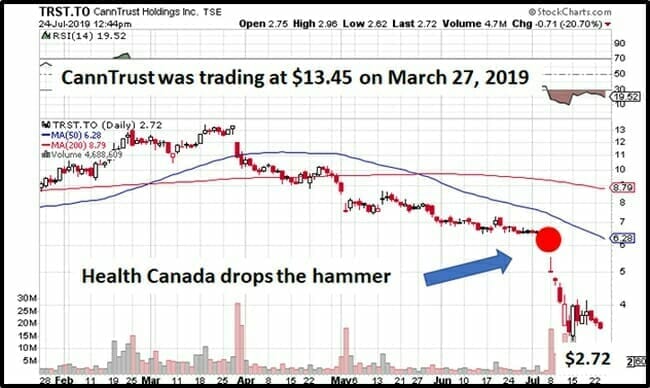 When the Globe & Mail asked CannTrust to respond to the leaked e.mails, Robert Marcovitch, TRST board member leading the internal investigation replied:

“The Independent Special Committee of the Board of Directors of CannTrust is in the final stages of a thorough investigation of these matters as part of our due diligence requirements. We expect to conclude this investigation within days and will take all appropriate actions immediately thereafter,” Mr. Marcovitch said.

Prior to the illegal grow-room scandal, CannTrust was a cannabis-stock darling. In May, 2019 Bank of America and Citigroup were lead underwriters of a USD $195.5-million CannTrust share offering (with the stock priced at $7.20 a share).

But there are still many investors who believe CannTrust can wriggle its way out of this.

“In the past I have had success explaining away these types of observations to Health Canada,” bragged Mr. Lee in one of the leaked emails. “This may lead to increased inspections and more scrutiny, but hopefully will have no other immediate material affect.”

It’s one thing to cheat and get caught.  It’s another thing to have your lying (“explaining away”) strategy exposed.

Regular TRST shareholders may not be.

Full Disclosure: Equity Guru has no commercial relationship with CannTrust.