Sometimes a new manager can reverse the fortunes of a losing team.

Example: When $3.1 billion Manchester United fired its pompous toxic manager, Jose Mourinho, in December 2018, the club was in a woeful 6th place – having lost 45% of its games that season. After hiring a new manager, Ole Gunnar Solskjaer (The Baby-Faced Assassin), Man U won 8 of its 9 next games.

Five cannabis companies have recently fired their CEOs. Let’s review the firings and examine the subsequent effect on the stock price.

Will a new CEO perk up the fortunes of an ineptly managed weed company?

“Organigram (OGI.V) isn’t taking calls right now,” wrote Equity Guru’s Chris Parry on December 12, 2017, “but the expanded product recall situation at OGI is every bit as bad as we feared,” according to information posted by Health Canada Wednesday night.

Turns out the recall, which the company admitted in a brief news release a few days ago had been ‘expanded’, but opted not to explain how, or for what, is a big one.

After initially recalling product sold recently, the expanded recall includes flower and oil products sold all the way back to February of last year.

That’s correct – almost a whole year of Organigram’s business, in which they sold millions of dollars of medicine to Canadian patients, has to be sent back and/or destroyed.”

Health Canada’s warning tells consumers, “Health Canada recommends that any individual affected by the recall immediately stop using the recalled product and to contact Organigram Inc. at the following number 1-855-961-9420.”

Here are some questions for the IR folks:

“Time to step aside, Denis,” added Parry, “You’re not up to the challenge.”

Arsenault was never heard from again. The recall disaster was contained.

“Other than the forced recall,” stated Parry, “Organigram pretty much skated.” 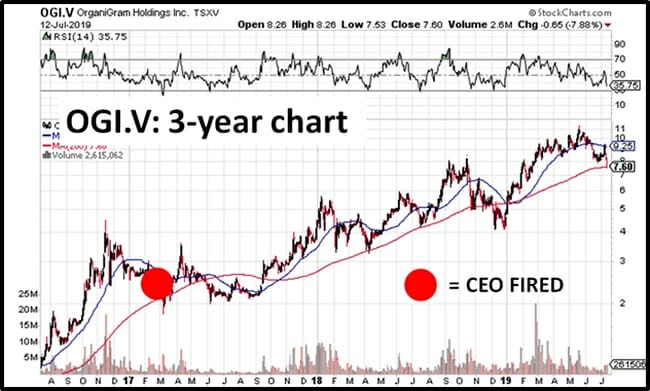 “I asked Ascent Industries (ASNT.C) CEO Philip Campbell ‘What took you so long’ in getting your cannabis licence?” recalled Chris Parry on November 21, 2018, “When I asked the question, I got a look from him, picked up clearly by the cameras, as if to say, ‘oh bruh, you gonna do me like that?’

“Ascent was notified by Health Canada that the regulators of Canada’s cannabis industry aim to revoke the company’s grow and dealers licence.”

“Health Canada’s review is focused on the period during which the company was privately held. Health Canada asserts that unauthorized activities with cannabis took place under the company’s ACMPR (Access to Cannabis for Medical Purposes Regulations) licence during this period.

“As I see it, there are four paths forward, and none of them are great – but the strong likelihood is, ASNT will carry on from here.

Option 1: Fight it in a tribunal hearing and win, likely by showing that the transgressors are gone.

Option 2: Sell the Canadian facilities entirely to a company that will have little trouble re-licencing them.

Option 3: Shut the BC facilities, sell the pieces at home and overseas, and liquidate.

On April 26, 2019, Ascent Industries reached an agreement with concerned shareholder group, catalyzing a 2nd revamp of management and the board of directors.

The ASNT stock lurched sideways like a drunken sailor. 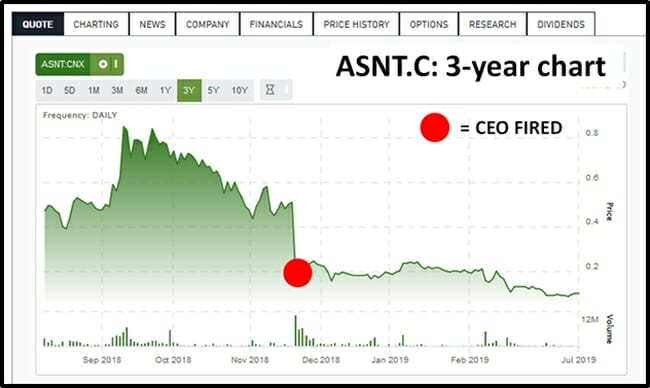 “Aphria (APHA.T)’s CEO Vic Neufeld stepped down from his role running one of Canada’s biggest pot producers,” stated BNN Bloomberg on Jan 11, 2019, “citing the toll the past five years has taken on his health and personal life.”

The market responded positively to Neufeld’s departures on, pushing Aphria shares to close up 5.4% to $9.18.

“Aphria lost a good chunk of its worth when short sellers accused the company executive and board of (in a nutshell) feathering their own nests by agreeing to acquire properties from themselves, for much inflated prices,” wrote Parry on February 15, 2019.

“Today, after a ridiculously long wait which involved the CEO stepping sideways from his position and quickly made but long-forgotten vows to seek legal recompense, Aphria finally responded.

Homers for Aphria will claim this ‘report’ (actually, it’s a summary of the report, which I’d really like to see) clears their names, but it doesn’t at all.

In short, overpaying themselves for assets is exactly what they were accused of, and what their independent report has shown happened.

Based on further information available to the Special Committee, it appears that certain non-independent directors of the Company had conflicting interests in the Acquisition that were not fully disclosed to the Board.

If there’s a positive to take away from today’s note, it’s that the old guard, which was so happy to enrich itself at the company’s expense, is out.”

“When Aphria stock pulled out of its nosedive and faced no regulatory penalties for its largesse, leading investors with a gambler’s risk tolerance to make solid gains, has given some retail investors a sense that big LPs are ‘too big to fail’, no matter what they’re caught doing,” added Parry in a recent article. 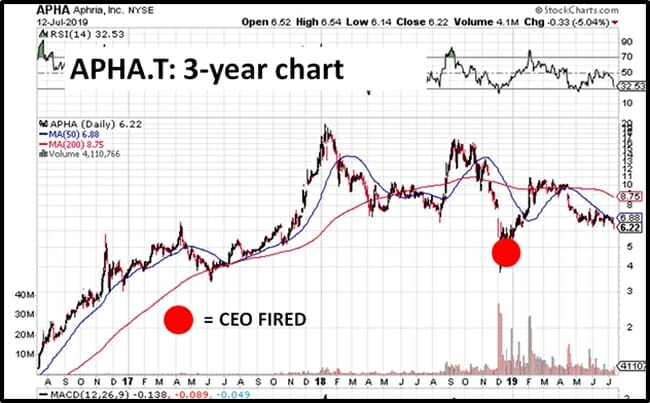 “Namaste Technologies (N.V) CEO Sean Dollinger, the mayor of Man-Bun City, he of the recently deleted Youtube livestreams, and the closest thing we have to an Artful Dodger of weed pubcos, had no super-voting power to save his ass,” wrote Parry on February 1, 2019 after the announcement of Dollinger’s termination.

“Dollinger, who has long been loudly, proudly, and enthusiastically bad at following the rules of his business, has been a target of ours for some time because, well, he’s just really bad at his job.

Today, following what the board calls a ‘recent expression of interest in the company,’ Dollinger was shown the door by his own directors for alleged ‘self-dealing.’”

The board has terminated the employment of Sean Dollinger as CEO for cause and removed him from his position as director, effective immediately.

In connection with the findings of the investigation, the company is commencing legal action against Mr. Dollinger for damages and disgorgement.

A short while later Namaste decided not to sue Dollinger, they gave him a padded office in the back with colouring pens unlimited art paper. Then they asked him to do his colouring at home.

On a personal level, that seems ungrateful. Sure, he talked a lot of shit, and did a lot of crazy things – but without Dollinger, there is no Namaste.

On a corporate level, the decision to erase Dollinger from collective memory is smart.

On a recent cannabis investing podcast, Morim was asked to differentiate Namaste from its competitors.

“The simple comparison is what Henry Ford said in regards to cars,” stated Morim, “If I would have built what my customers asked, it would have been a faster horse. So, he works with them on the problem and builds something that is sustainable long-term. I’m very excited to be able to drive a product-driven culture within Namaste.”

In truth, operating a cannabis-related website does not rival the accomplishment of the first mass-produced automobile.

“Namaste finally posts financials, and they’re rife with bad scenes,” wrote Parry on May 31, 2019. “The highlights aren’t the $42 million loss over 15 months, that’s pretty much par for the course in the cannabis business these days. What’s very interesting is the pattern of self-dealing that comes from the fine print.”

Namaste stock popped 10% after Dollinger’s forced exit but then slumped from $1.18 to $0.51 as it slowly dawned on the investment community that a vape-pen website might not be worth $1 billion. 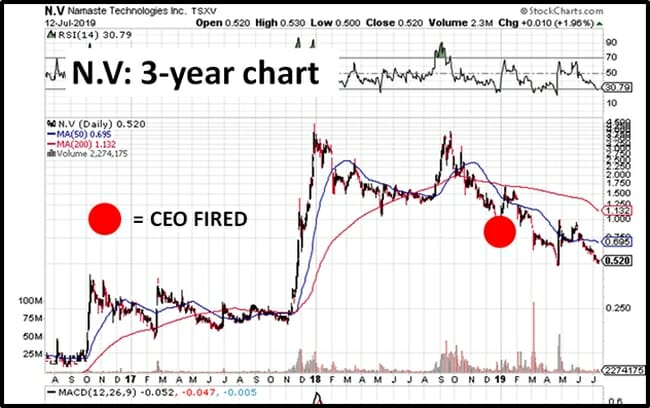 Eighteen months earlier, Canopy had 600,000 square feet of licensed growing space and a gross margin of 52%. Then Canopy secured a partnership with Constellation Brands (Corona beer), which paid $4 billion for a 38% stake in Canopy.

“We could have stayed there (at 600,000 square feet) and we would have been a nice tidy little company, probably quite profitable,” Bruce Linton, Canopy CEO said on the company’s Q4 2019 earnings call. “But after the $4 billion injection from Constellation Brands, you need to use that capital to build scale, and we did.”

Equity Guru pointed out that Canopy does have revenues. In Q4 2019, Canopy raked in $94.1 million – 13% higher than the previous quarter. Ten days later, Canopy announced that its long-time co-CEO Bruce Linton will “step down” from all positions and responsibility at the company.

The strangely–worded release advised shareholders that “Bruce Linton announced that Bruce will step down as co-CEO and Canopy Board member.”

The seeds of Linton’s demise were sowed last fall when Canopy accepted a $5.1 billion cash injection from Constellation (STZ.NYSE), the $38 billion beverage giant. At the time, $5.1 billion gave the Mexican beer maker a 37% stake in Canopy – along with WEED warrants that could result in Constellation becoming a majority owner.

Canopy re-jigged its board of directors to include Constellation employees like David Klein, Constellation’s CFO. Constellation CEO Bill Newlands stated, “We were not pleased with Canopy’s recent reported year-end results.” Newlands also sits on the board at Canopy. 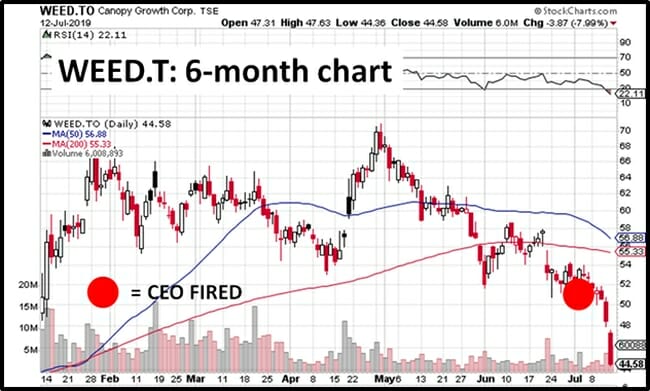 Of the five cases, only Organigram has appeared to benefit from the termination of the CEO, but it’s not clear that it did.

What if the board had allowed Organigram CEO Denis Arsenault to issue a statement: “I fo’d this up.  It’s not acceptable. I’m responsible. It will never happen again. Here’s my new strategy.”

Would the OGI chart look any different?

I took enormous pleasure in the firing of Man United’s coach, Jose Mourinho, partly I admit – because I had clairvoyantly predicted his failure. After winning 8 of 9 games with the new coach, Man U went on to lose seven of their last nine games leaving them sixth in the table, five points outside the top four and 32 behind champions Manchester City.

Changing the leader felt cathartic. Given Mourinho’s visible ineptness, it was the right thing to do. But the data suggests that the rot was deeper than I thought.

Full Disclosure: Ascent Industries was an Equity Guru marketing client; we have no financial relationship with the other companies mentioned in this article.