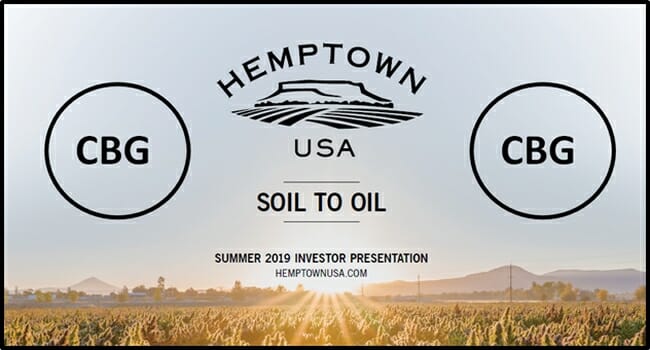 I once consulted with a veteran CEO (potash, lithium, tech, gold) who told me, “Before I take a company public, I’ve got 60 press releases written in my head”.

Since the man had created over $1 billion in enterprise value, I wasn’t going to argue with his roll-out template.

His idea: you don’t take a company public, then scramble around for meaningful ways to add value/de-risk it – that plan is already in place.  Letters of Intent (LOIs) ready to sign, land acquisitions waiting to close, FCC approvals pending.

Hemptown USA – a CBD/CBG company – has an entirely different strategy.

The company isn’t yet public (we are expecting an IPO in Q4, 2019), but they have already raised $23 million and made a number of strategic acquisitions.

By the time the first share is traded, Hemptown will already be a mature company. 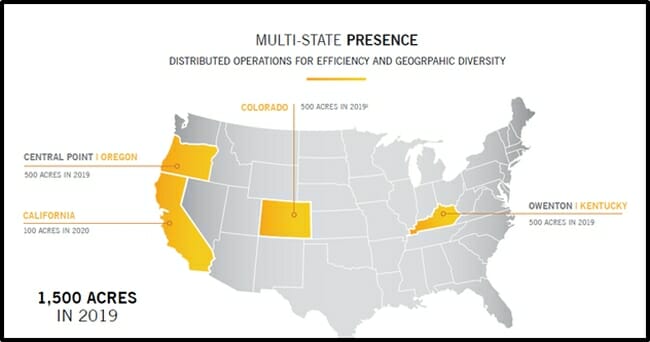 On July 10, 2019 Hemptown announced that it has acquired “all or substantially all” of the FDA licensed nutraceutical business of the Kirkman Group based in Lake Oswego, Oregon.

To understand why that is critical, we have to crank back two months to Hemptown announcing the completion of a $23 million financing, led by Canaccord Genuity.

Hemptown is growing 1,500 acres of high-grade “feminized hemp” in Oregon, on the northern tip of the famous weed-growers Emerald Triangle.

In other words, the company has biomass, which it could sell for a modest profit (“rich farmer” is an oxymoron).But to generate serious profits, Hemptown plans to distil the hemp into full-spectrum CBD and “CBG crude” (more on CBG in a minute). 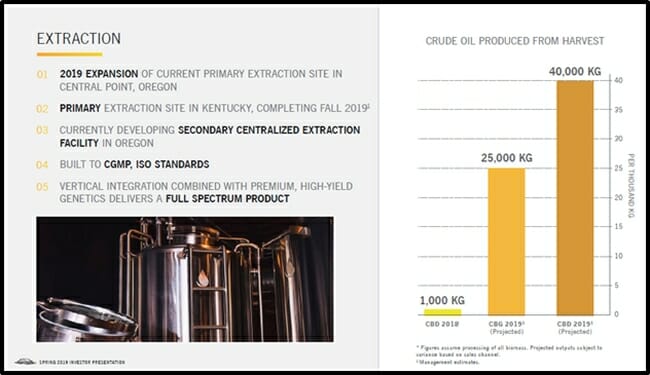 Hemptown could take some of that $23 million raised and build an FDA licensed, cGMP nutraceutical manufacturing facility, but to set up protocols, recruit scientists, test the lab equipment and get government approvals could take years.

In this frontier market, time is market-share.

Hemptown wants to harvest the hemp, process it, and get its product on the shelves asap.

Hemptown believes the nutraceutical industry standards for producing finished goods will soon be a requirement for all products being sold in the marketplace.

Hemptown’s objective is to be one of the largest producers of CBG in North America.

Hemptown is growing over 500 acres focused exclusively on these rare genetics in an effort to become a dominate North American supplier of CBG by the end of 2019.

Hemptown USA is monetizing the present (CBD) while looking to the future (CBG) for enhanced revenues.

Preparing nutraceutical formulations for autistic children is not a culinary process.

It’s a scientific one.

The wellness industry is populated by a galaxy of doctors, dieticians and health experts.  In this world, standardisation of product and precision of dosage is paramount.

“Ultra Tested” is the highest standard of purity testing in the nutritional supplement industry.  Hemptown will be one of the first companies to offer product liability insurance on all future Consumer Packaged Goods produced at the facility.”

“The team at Kirkman’s is delighted to now be part of the Hemptown USA group,” stated Humphrey, “Coupled with Hemptown’s deep expertise in farming and extracting novel cannabinoids, the company will be able to add to Kirkman’s product offerings.”

The Skinny on Hemptown USA:

Equity.Guru’s Chris Parry recently spoke with Hemptown co-founder, director and president, Michael Townsend, to lift up the hood on the company, its revenue run and its highly anticipated IPO expected in Q4 2019.

This company has a plan.