Why is TGOD.T CEO Brian Athaide buying shares on the open market?

Bag-holders bitch loudly when a CEO unwinds a position in the company he or she is managing.

But it’s really none of our business what insiders do with their shares.

“That’s fair – the man has been integral in driving the share price of WEED.T upward,” continued Parry.

“BUT…it’s worth noting those options were valid until 2022 and 2024. Why take them down now, if you think the share price is going to drive upward further still from where it is?

Maybe Linton is buying a waterfront mansion and a small harem of busty pool cleaners – we don’t know. It’s his right to cash in his chips whenever he feels the need.”

Divorce, lawsuits, alimony, real estate acquisitions – there are many legitimate reasons why an insider might need cash fast.

Selling shares isn’t the same as shorting a stock. It’s not a bet that the stock will go down. It’s an action designed to make the bank account go up.

What does the other side of that coin look like?

When an insider BUYS shares on the open market – is that always a bullish sign?

Not necessarily: the insider could be sending a signal to the board of directors that he is committed to his job. Or he could be blinded by his proximity to the company – and not realise the ship is sinking.

At any rate Brian Athaide, the CEO of  The Green Organic Dutchman (TGOD.T) has recently been buying shares of TGOD on the open market.

Domestically (in Canada) TGOD does the same thing, but also sells organic weed to the Canadian recreational market.  As a kicker – TGOD recently entered the U.S. CBD beverage market.

Two weeks ago, TGOD announced that it has entered into a multi-year agreement with Neptune Wellness for extraction, formulation and packaging services.

The company has a massive (50,000 sq. ft) processing facility in Sherbooke, Quebec – loaded up with scientists and technologists who specialise in making oils.

“The Green Organic Dutchman takes organic seriously,” stated BTV, “Their processes are certified by both ECOCERT and Pro-Cert. In addition, they’re the only Licensed Producer where 100% of their cannabis products is organically grown.”

Pro-cert is the 2nd certification body to endorse TGOD’s organic process at its Hamilton facility.

All TGOD cannabis products are certified by ECOCERT, a global organic certification body. ECOCERT verifies that production standards are met through surprise audits, and product analysis.

Many Canadian cannabis companies talk about “global expansion” and the “Europe opportunity”.  TGOD has moved well beyond the talking phase.

“This Poland acquisition will significantly add to the TGOD’s top and bottom line,” stated Brian Athaide, CEO of TGOD. “This accretive acquisition provides a gateway to Europe’s 750 million people, while accelerating our plan to become the world’s largest organic cannabis brand.” 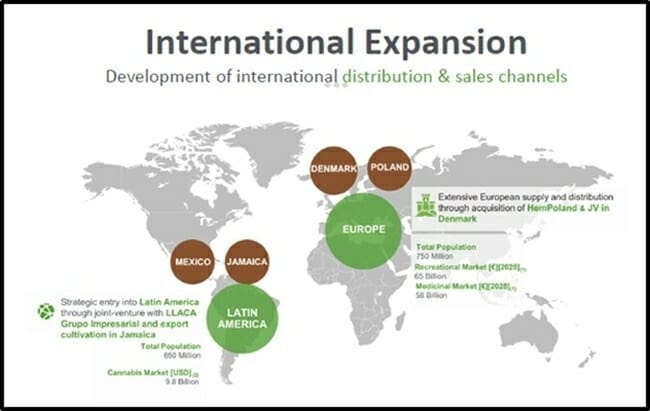 It’s not breaking news that organic cannabis is harder to grow and more profitable to sell than regular weed – but the psychology behind the rapid adoption of organic consumables is not often discussed.

Consideration of Future Consequences (CFC) is a measure of the extent to which people calculate the future consequences of their current behaviour.

Bagel-eating researchers with PHDs have determined that the higher a person’s CFC, the more likely they are to buy organic food.