Beyond Meat (BYND.Q) slices up short-sellers in its first two months

It’s hard to deny that we’re not embarking on a cultural renaissance as far as climate change goes. It’s on everyone’s lips. We know that meat production causes methane emissions, and methane is a prime-mover in global warming. So when a company appears with a meat-alternative product that doesn’t taste like cardboard, it’s bound to cause a stir.

But is the market big enough to support a $7.5 billion market cap and a chart that looks like this? 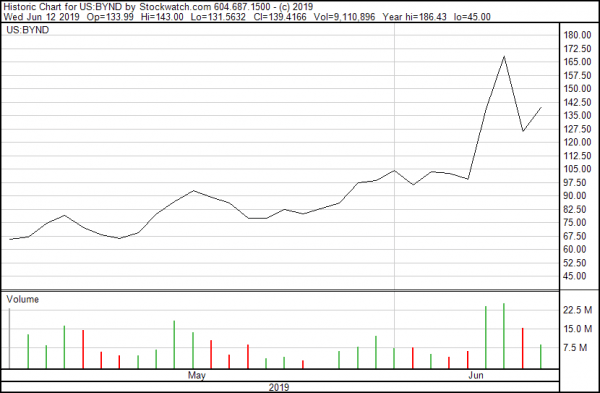 But because we’re all about good, diligent journalism here at Equity.Guru, I thought I’d put my money where my mouth was (literally) and go and try one for myself. The A&W on the corner had been advertising their Beyond Burger for months and most of the time they’re sold out, but I got my hands on one.

Here’s how it went:

There was nothing different about the burger when I tore open the package.

It had the same smell, the same ingredients, but the first bite told me all I needed to know: the consistency was off; it was softer inside somehow than animal meat, with a rubbery exterior. While the slightly salty, tangy taste was not unpleasant, it wasn’t going to win me over either.

This product needs to win over people like me—skeptics and omnivores who wouldn’t normally even so much as glance at a burger made of vegetables—if it’s going to be competitive going forward in this emerging market.

It’s too early to tell at this point.

But maybe we’re getting a little ahead of ourselves.

What is Beyond Meat?

Beyond Meat started in California in 2009 and grew into a company that manufactures, markets and sells plant-based meat products mostly in the United States. Their products include the Beyond Burger, Beyond Sausage and Beyond Beef Crumbles, and have since reached over 30,000 retail and food service outlets worldwide.

They have some big name partnerships with names you might recognize, including A&W, Carl’s Junior and TGI Fridays.

Back in 2016 they drew the attention of socially conscious investors, including A-list movie-star Leonardo DiCaprio, and then went public in earlier this year with the help of Goldman Sachs, J.P. Morgan and Credit Suisse.

“Leo is serious about climate change. He’s a really good ally for us. This is not a celebrity deal. He is someone who genuinely believes in what we’re doing and wants to help grow it,” Ethan Brown, CEO of Beyond Meat, told Fortune.

How did the market respond?

The stock blew up in its first month by 580%. Then last Friday it went up again by almost 40%, and then another 23% percent on Monday. Beyond Meat announced a partnership with Tim Hortons to sell their meat products in 4,000 stores today, and their stock went up again by 16.2%

Not bad for a new company not even six months out of their IPO, but still not enough to justify that market cap.

It’s no wonder there’s lots of chatter from short-sellers on the internet. The short flow was at 45.3% as of the middle of May, which means that there are a lot of short-sellers not answering their phones right now.

Is this company overvalued?  Hell yes.

Are you going to be able to time this one so you don’t have to duck your broker’s calls?  Best of luck to you.

The smart play is to wait until the hype dies off and the stock price halves, and then buy in and see what happens. Climate change isn’t going away, and if companies like Beyond Meat can stay on that bull in the upcoming years, then they could be worth three or four times what they are right now.