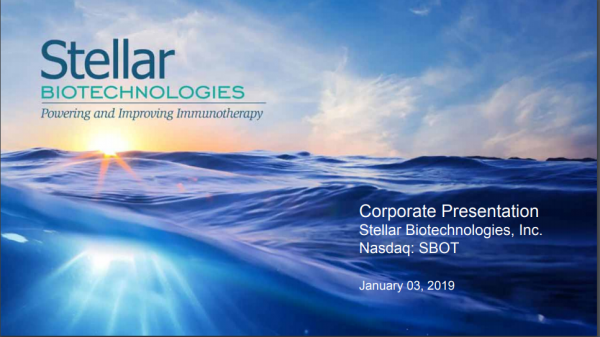 According to the World Health Organization, around 50 million people suffer from dementia worldwide and nearly 10 million new cases are diagnosed every year. Alzheimers disease is the most common form of dementia and may contribute to 60–70% of cases.

This harrowing statistic is what makes a company like Stellar Biotechnologies (SBOT.Q), which is fighting the good fight against this disease and others like it necessary.

The markets agreed, having showered their approval today with a 78% stock price bump for their reverse merger with Edesa Biotech, a Canadian-based biotechnology firm.

Stellar has been around since 1999, operating out of Port Hueneme, California. They manufacture vaccines using Keyhole Limpet Hemocyanin (KLH), an immune-stimulating protein used in the fight against certain cancers, immune disorders, Alzheimers and inflammatory diseases.

KLH is a large oxygen-carrying protein found in the giant keyhole limpet, Megathura crenulata, a marine gastropod mollusc that lives off the California coast.

Stellar brings a number of different lucrative assets to this merger, including working partnerships, product-agreements and the patented hemolymph extraction process which draws the protein from the mollusc.

Stellar has seven new vaccines in various stages of development, with the closest to actual production being one for metastatic breast cancer in stage three clinical trials.

In contrast, Edesa Biotech is a Toronto-based private biotech company focused on the development of treatments for significant unmet medical needs, such as allergic contact dermatitis.

Stellar Biotechnology will adopt Edesa Biotech’s name in the merger, and will focus on the development of treatments and research for both dermatological and gastrointestinal diseases.

“This agreement marks another milestone for Edesa and our mission to efficiently develop novel, safe and effective treatments for conditions where patients have limited treatment options available,” said Par Nijhawan, MD, Chief Executive Officer of Edesa.

The proposed transaction is slated to close during Q2 2019 now that it has received shareholder approval.

When the deal closes, Edessa will become a wholly-owned subsidiary of Stellar, which will change its operating name to Edesa Biotech Inc.

Edesa shareholders will exchange their shares for Stellar’s common shares.

There seems to be some contention on just how much this particular sub-sector of biotechnology is worth.

Transparency Market Research estimates that cancer immunotherapy (which is just a subset of what Stellar deals with) will grow from $37.5 billion in 2015 to $124.88 billion by 2024, a compound annual growth rate (CAGR) of 14.5%.

Could be one to watch.