If there’s anything good in the financial statements just posted by Namaste Technologies (N.V) – last thing on a Friday afternoon, naturally – it’s that they have a lot of cash, and we finally know just how badly the company was being run last year, before CEO Sean Dollinger was turfed out.

The highlights aren’t the $42 million loss over 15 months, that’s pretty much par for the course in the cannabis business these days.

What’s very interesting is the pattern of self dealing that comes from the fine print.

“The Company received consulting services in the amount of $214,209 (2017: $nil) from an entity controlled by a former Board Member of the Company.”

“The Company outsourced substantially all of its technology and IT support services to an entity controlled by a member of key management personnel.”

I mean, for Christ’s sake.

The numbers show more: The infamous ‘share buyback program’ that was touted as a way to bring shareholder value only bought 2m shares back out of the 300m issued.

Then there’s the lawsuits, which would appear to be in good shape based on the info in these statements:

On October 19, 2018, a putative class action was filed in the Ontario Superior Court of Justice against the Company and certain officers of the Company alleging, among other things, that misrepresentations were made in connection with the divestiture of Dollinger US. A Fresh as Amended Statement of Claim issued on February 22, 2019 which, among other changes, expands the proposed class period. The Company intends to vigorously defend the allegations in the claim and will pursue all available legal remedies that it deems necessary.

On October 22, 2018, a second securities class action was filed in the United States District Court, Central District of California against the Company and certain officers of the Company alleging false or misleading statements in violation of U.S. federal securities laws relating to the Company’s December 2017 sale of Dollinger US and the Company’s application for listing on the NASDAQ. The plaintiff voluntarily dismissed this lawsuit on November 16, 2018, and refiled in the United States District Court, Southern District of New York. The Company intends to vigorously defend the allegations and will pursue all available legal remedies that it deems necessary.

CannMart Inc. entered into a definitive supply agreement with 8528934 Canada Ltd. d/b/a 7ACRES [AKA Supreme Cannabis FIRE.T] dated January 24, 2018 under which it committed to purchase a minimum annual quantity of 1,000 kilograms of premium dried cannabis flower at $6 per gram within the calendar year 2018. The Company is currently disputing its obligations to the seller under the definitive supply agreement and the amount payable thereunder remains uncertain at this time.

Okay, that’s got to be all, nope, never mind:

Options dealt to management in the previous 15 months: 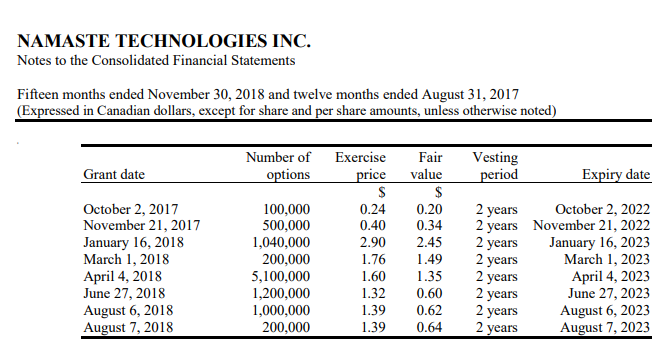 Jesus. Did Namaste do anything right over the past few years?

Well yes. They raised a shit ton of dough when their stock hit $3 for a minute last year. 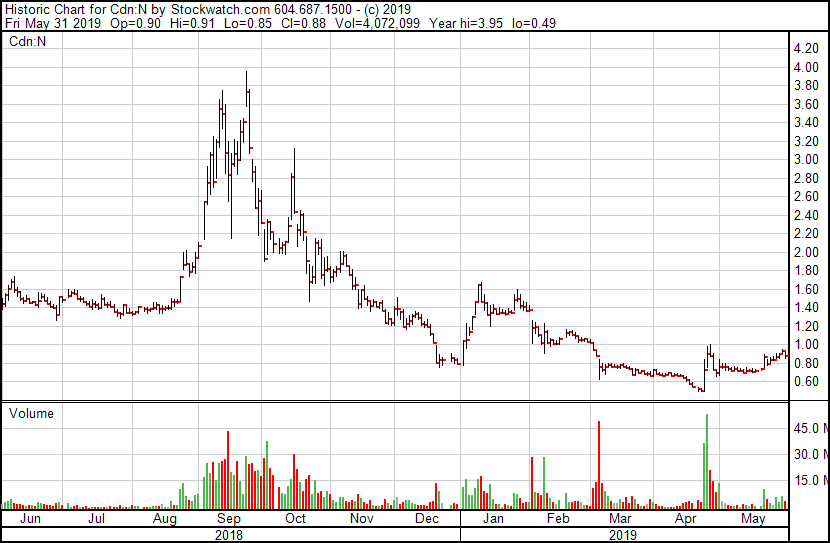 Of course, anyone who bought those shares took an absolute beating on the deal, but the company actually did really well out of it and is sitting on around $68 million in cash as a result.

That’ll buy an awful lot of reputational rehab, even if it blew out the share count by a bunch.

Going forward, several things will need to happen for Namaste to claw its way back to level.

I look forward to the day when I can say Namaste is a good deal again, but at its current market cap, and with all the things burning around it, I suspect it’ll need to have a really nice run of transparency, progress, and revenue to make that happen.