Regular readers know I’ve been critical of ICC International (WRLD.U) for some time, but news today the company would purchase AgraFlora Organics’ (AGRA.C) Colombian pharmacy assets brings me a rare opportunity to applaud both players in the deal.

ICC International Cannabis Corp. (CSE: WRLD.U) is pleased to announce that the Company has entered into a binding Letter of Intent with AgraFlora Organics International Inc. (CSE: AGRA), to acquire 100 per cent of AgraFlora’s Colombian pharmacy operation, Farma Swiss S.A.S.

As per the terms of the Agreement, International Cannabis will issue AgraFlora   such number of common shares in the capital of ICC that is equal to $250,000 based upon the five-day variable weighted average price of ICC’s common shares for the five trading sessions prior to the announcement of the agreement.

By no stretch is the deal a massive one; AgraFlora spins off a non-core business to a company they already have a supply deal with, for minimal dough admittedly, but ICC does have Colombian operations that can benefit from the pharmacy business, albeit as a small piece of the puzzle.

Feh. ICC has a habit of hoovering up any old bits of weed business they find lying around, as long as the seller will take their stock in lieu of cash and the operation is in a foreign jurisdiction, and this deal follows that long established path of shares as currency for something that won’t break anyone’s brains.

But, in the traditions of the best baseball trades, it would appear both companies do well enough out of the deal to earn a subtle nod. ICC gets to beef up its LatAm operations, and a pharmacy has the added benefit of bringing access to import/export opportunities that AgraFlora wasn’t in a position to utilize.

They, meanwhile, get to streamline.

Brandon Boddy, Chairman and Chief Executive Officer of AgraFlora notes: “Monetizing of our flagship pharmacy operation to a trusted ally, permits us to streamline our international cannabis operations while focusing on the continued retrofit of our world class greenhouse complex in Delta, BC.”

AgraFlora, for those who like history, was formerly PUF Ventures, and before that Chlormet Technologies, and before the weed rush it was Newton Gold. As Chlormet, the company placed in my inaugural late 2013 Top 5 power rankings of early stage cannabis companies, going on a big run before being collared by the Venture Exchange for a Change of Business halt that took them out of the game for most of a year.

As PUF, they toiled around the edges, waiting for a Health Canada green light, but as AgraFlora the company has really come into its own, putting together a 300% stock rise since August of last year on the back of a joint venture to turn a 2.2 million sq. ft. tomato greenhouse into a giant cannabis facility.

It’s really hard to visualize what that sort of number means in the real world, so here’s some footage that shows you the scale.

Agraflora – Group of Industry Experts from 360hometours.ca on Vimeo.

Look at this thing. 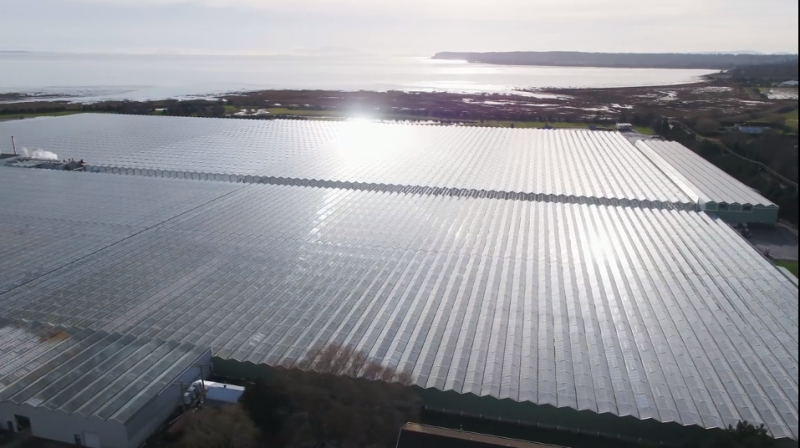 That’s not a greenhouse, that’s a greensuburb.

For mine, it makes less sense for AgraFlora to run around with bits of projects in other countries, and slinging non-essential works to others, even if it’s just for a bit of ICC paper, makes sense. It’s focus-bringing.

That roof belongs to a joint venture between AgraFlora and the Houwelings Group, which is legit Big Agriculture, running giant vegetable plantations in California, Utah, and in BC since the 1950’s.

That JV, known as Propagation Services Canada, says it will have the first 250k sq ft operational with cannabis by summer of this year, which would make the current market cap of $188 million a bit of a steal, even if that was the top out.

If they can hit that milestone and then kick on to phase two, there’s a lot of scope for (no pun intended) growth here.

The company says it’ll have 2.2 million sq ft built out in 2020 – I don’t think I believe that, though I respect the goal. If it takes longer, that’ll be fine as 250k sq ft will take some wrangling and will generate a lot of product.

I’m not as big a fan of ICC as I am of the AgraFlora deal, and I think their argument with Wayland Group (WAYL.C) about whether they’ve closed their international asset purchase deal with that company or not is a ridiculous look, but this inexpensive asset purchase makes a lot more sense than most they’ve announced recently.

AgraFlora isn’t a client of ours, so we’re not conflicted here. I’m writing about them today solely because I like the focus that this news release speaks to, I like the valuation, and I absolutely love their choice of JV partner in that greenhouse operation, so respect where it’s due.

FULL DISCLOSURE: No commercial arrangement and no stock held.