Delrey Metals Corp. (CSE:DLRY) / (OTC: DLRYF) owns 100% of 5 promising properties in Canada. Four are prospective for vanadium, totaling 10,856 hectares, one is a cobalt–copper-zinc opportunity that Cobalt 27 Capital Corp. acquired a 2% NSR on. In addition, on May 21st, management signed a definitive agreement on an option to acquire an 80% Interest in select mineral licenses in the Four Corners project in Newfoundland & Labrador, and establish a JV with the seller. This is a giant, bulk-tonnage deposit that could contain 10 billion tonnes of rock, much of it mineralized, with lower-grade Vanadium, plus Iron & Titanium. Drilling this year will seek to validate the large scale of the deposit and identify additional mineralized zones.

Four Corners is a 7,655 hectare [recently upsized by 51%] property in Newfoundland & Labrador that has had significant historical work done on it. The Project hosts titanium-vanadium enriched magnetite with evidence of significant & consistent metal accumulations. This is a massive, (potential mineralized strike length > 16 km) deposit, in a great jurisdiction. Selective grab samples assayed > 40% Fe, 5% Ti & 0.30% V205 and as high as 56.9% Fe, 15.1% Ti & 0.39% V205. In 2012, SRK Consulting completed promising preliminary metallurgical work that showed concentrate samples of 0.643% V205 and recoveries of vanadium of > 90%. Importantly, there are at least 5 highly prospective targets, only one of which has been drilled.

The Burgeo Highway provides access to an ice-free deep water port within 40 km, and there’s a commercial airport & industrial service center in the nearby town of Stephenville, (a potential brownfield site for primary & secondary processing). Low exploration & development costs are anticipated as there’s no need for helicopter or camp support, and there’s a government rebate of as much as 50% of select exploration expenditures (up to a max of $150,000/yr.). Management characterizes community relations as excellent, Newfoundland & Labrador consistently ranks as a top global mining jurisdiction by the Fraser Institute. This year it ranked in the top eighth of over 80 jurisdictions. 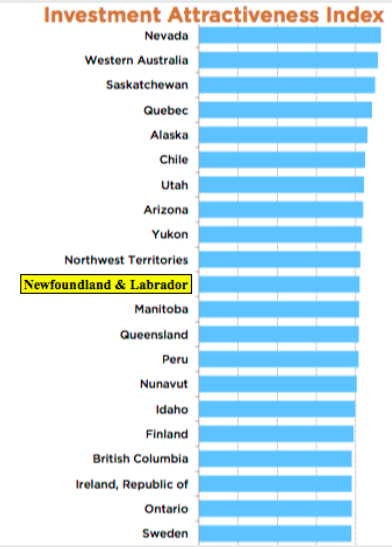 “Finalizing the Definitive Agreement with Triple Nine Resources on The Four Corners project, and substantially increasing the property size, cements Delrey’s positioning within the energy metals sector. We recently completed a site visit and spent time with not only Vic French and the Triple Nine team, but also senior officials from the Department of Natural Resources. Newfoundland & Labrador is clearly a world class mining & exploration jurisdiction.

Our objective of rapidly developing the Project is in line with our partners at Triple Nine. We now have a plan in place to unlock the value shown by their excellent prior work. Keating Hill East in particular, and 4 other high priority target zones, will be our initial exploration focus. We intend to expand on, and validate, ample historic work, and bring the Project up to NI 43-101 compliant standards as soon as possible.”

In the May 21st press release, the Company announced the acquisition of an additional, contiguous ~2,577 hectares. The new claims cover all of the roughly 4k m x 4.7 km Four Corners magnetic anomaly and the Bullseye magnetic anomaly, which has a selective outcrop sample that assayed 48.18% Fe203, 8.93% Ti02, & 0.327% V2O5. The enlarged land package [7,655 ha], allows Delrey to add further value through regional exploration in and around the Company’s main Keating Hill East Zone. 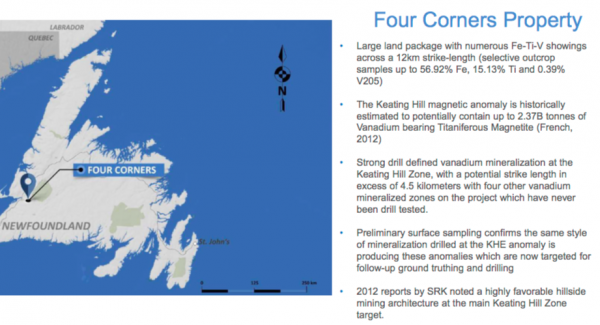 The primary target, Keating Hill East, was mapped by the Geological Survey of Canada for at least 4,500m, with widths ranging from 400 to 1,100m. Mineralization extends from surface to 590m depth and remains open, representing a very large potential target. An airborne EM survey conducted in 2011 identified 4 new promising targets, increasing the potential mineralized strike length to > 16 km. Surface sampling confirmed the same style of mineralization found at Keating Hill East is producing the geophysical anomalies. Follow-up work is planned later this year.

For further commentary on the Four Corners project, I turned to Director, Mike Blady,

At current spot prices, do you believe that all 3 metals; Vanadium, Titanium & Iron, could potentially be economically recoverable? Are there any other metals of possible interest?

At current spot prices we would most likely need at least 2 of the 3 metals for the project to be economically viable. We have not done enough work on the economics yet to be certain. In addition to V – Ti – Fe there are also some PGE & minor gold showings on the Four Corners project.

The deposit could be 10 billion tonnes on a recently expanded footprint of 7,655 hectares. It’s open in all directions. There are many other targets (mag/sampling) that could potentially increase the overall grade of a future resource.

What exploration activities are expected to be carried out at Four Corners between now and year-end? 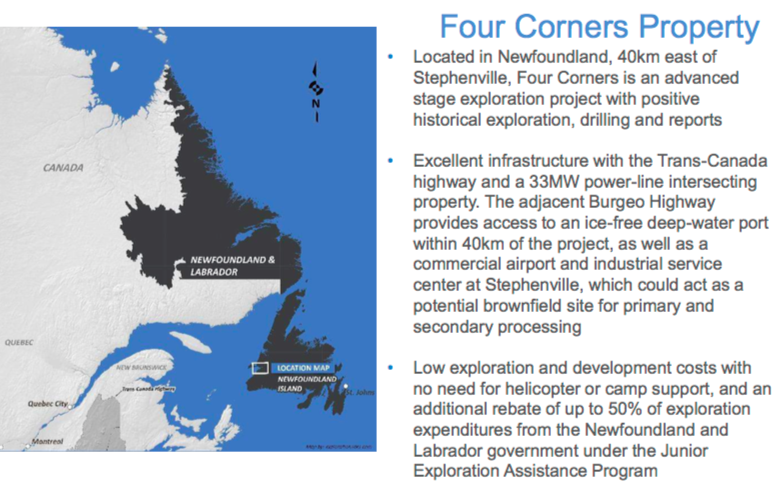 As mentioned, we plan to advance this Project at a rapid, but prudent pace. Exploration will include, geophysics, mapping, sampling (grab, chip & channel) & diamond drilling. The amount & timing of drilling depends on the results of the geophyiscs, mapping & sampling. Material news on the exploration / prospecting front will be announced as it is received.

Might Delrey Metals be in the position to deliver a maiden mineral resource this year? Or, is it next year’s business?

Due to the consistent and homogeneous nature of the cumulate style of mineralization, Delrey could potentially deliver a maiden resource over the winter. However, this is contingent on the grade & size being in-line with what we have seen in historic drilling, and the anticipation that we would be able to incorporate additional higher grade zones.

What portion of the 7,655 hectare [recently upsized 51%] Four Corners property has been explored? By explored I mean more than just grab samples, actively explored with drilling and/or surveys.

That’s a good question. Less than 10% has been targeted by drilling. However, the majority of the claims have been explored with some sort of geophysics (airborne/ground). We have a number of attractive targets to go after, we are in the process of choosing the best ones.

On May 16th, Delrey announced highlights of a recent Phase II exploration program done on its 100%-owned Star, Porcher & Blackie properties near Prince Rupert, BC, Canada. Delrey is one of the few vanadium juniors actively exploring their properties. 125 rock samples were collected from the 3 properties, with assays as high as 0.51% V205 (49% Fe & 4% Ti). Prospecting focused on the strongest magnetic anomalies mapped during the Phase I airborne magnetic surveys (see news release April 15th). Management is very encouraged by the consistency of V205, titanium & iron enrichment on all 3 properties, and has submitted 5-year area-based permit applications to establish a total of up to 40 drill sites on the Blackie, Porcher & Star properties.

Selective outcrop sample results up to 0.422% V2O5, with 11 of 61 rock samples returning > 0.20% V2O5 along a strike length of 1 km. An approximately 2.8 km x 1.8 km strong magnetic anomaly remains to be ground-truthed in the southern portion of the property.

Assay results at Star are highlighted by 11 of the 43 selective outcrop samples returning > 47% Fe (up to 61.2%) from exposed northwest-southeast oriented semi-massive to massive magnetite outcrops along a strike length of approximately 4.7 km. V2O5 enrichment in massive magnetite samples returned as high as 0.10% V2O5. Strong Vanadium in-stream sediment results of between 447 to 637 ppm V2O5, suggest that higher concentrations in bedrock may occur elsewhere on the property.

NOTE: Grab samples are selective in nature and not necessarily representative of the mineralization hosted on the properties.

“The Delrey team is very pleased with our Phase II results as the assays not only show excellent continuity with the Phase I geophysical anomalies, but include some impressive vanadium, iron & titanium grades. A systematic approach to exploration at Blackie, Porcher and Star has allowed us to put the second piece of the puzzle into place on our BC assets. We’re optimistic we will be in a position to initiate our Phase III work program consisting of diamond drilling this summer on all 3 properties, further enhancing the value of Delrey for its shareholders.”

Disclosures: The content of this article is for information only. Readers fully understand and agree that nothing contained herein, written by Peter Epstein of Epstein Research [ER], (together, [ER]) about Delrey Metals, including but not limited to, commentary, opinions, views, assumptions, reported facts, calculations, etc. is not to be considered implicit or explicit investment advice. Nothing contained herein is a recommendation or solicitation to buy or sell any security. [ER] is not responsible under any circumstances for investment actions taken by the reader. [ER] has never been, and is not currently, a registered or licensed financial advisor or broker/dealer, investment advisor, stockbroker, trader, money manager, compliance or legal officer, and does not perform market making activities. [ER] is not directly employed by any company, group, organization, party or person. The shares of Delrey Metals are highly speculative, not suitable for all investors. Readers understand and agree that investments in small cap stocks can result in a 100% loss of invested funds. It is assumed and agreed upon by readers that they will consult with their own licensed or registered financial advisors before making any investment decisions.

At the time this article was posted, Peter Epstein owned no shares of Delrey Metals and the Company was an advertiser on [ER].

Readers should consider me biased in favor of the Company and understand & agree that they must conduct their own due diligence above and beyond reading this article. While the author believes he’s diligent in screening out companies that, for any reasons whatsoever, are unattractive investment opportunities, he cannot guarantee that his efforts will (or have been) successful. [ER] is not responsible for any perceived, or actual, errors including, but not limited to, commentary, opinions, views, assumptions, reported facts & financial calculations, or for the completeness of this article or future content. [ER] is not expected or required to subsequently follow or cover events & news, or write about any particular company or topic. [ER] is not an expert in any company, industry sector or investment topic.