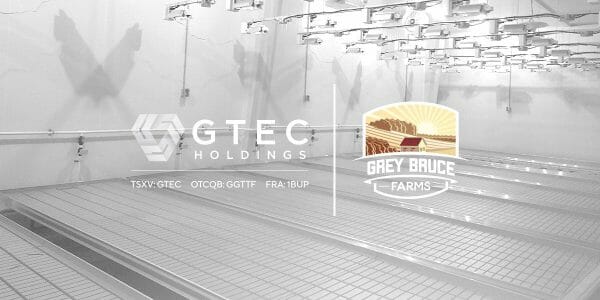 The evidence package submission is the final step to acquire the facility’s cultivation process. It proves that the facility is complete, operationally ready and in compliance with the Cannabis Act and regulations.

“With the recently announced changes to Health Canada’s licensing system, we remain confident that Grey Bruce will be issued its Standard Cultivation license in a timely manner,” said Norton Singhavon, Founder, Chairman and CEO of GTEC.

Grey Bruce’s new facility joins Alberta Craft Cannabis in Edmonton and the recently completed Tumbleweed Farms in Chase, B.C. The company’s 2019 planned facilities will span over 120,000 square feet across B.C., Alberta and Ontario with an anticipated annual output of 14,000 kilograms of indoor flower by late 2019.

Earlier this month, GTEC paid $2.113 million for a cannabis retailer, which will serve as the company’s flagship brick-and-mortar store in Western Canada. The new acquisition will be called Cake Cannabis Co and will operate under their wholly owned subsidiary GreenTec Retail Ventures.

The Vancouver-based store was previously licensed to operate and sell recreational cannabis by the city’s Medical Marijuana Related Use program. It comes with 4,000 square feet of retail space in one of Vancouver’s busiest neighbourhoods.

In related news, GTEC sent its video evidence package to Health Canada for its Tumbleweed Farms facility to complete the regulatory process and start growing cannabis.

GTEC finished construction on its Tumbleweed farms facility in January 2019, and decided to postpone the regulatory process while their consultant, Cannabis Compliance, performed a review to find, assess and solve any unforeseen problems that might arise.

Tumbleweed Farms is eight kilometeres from a major highway just outside of Kamloops, B.C. and has 10,000 square feet for indoor cultivation. The facility sits on 23 acres of land with access to an artesian well.

In addition to seeking regulatory approval, GTEC amended their Aug. 12, 2017 definitive share purchase agreement with the vendors of Tumbleweed Farms on March 4, 2019.

The agreement replaced the previous cash milestone payments offered in the original deal with an issuance of $2,250,000 worth of common shares at a price per common share equal to the 30-day volume-weighted average price after submitting the evidence package for a Health Canada cultivation license