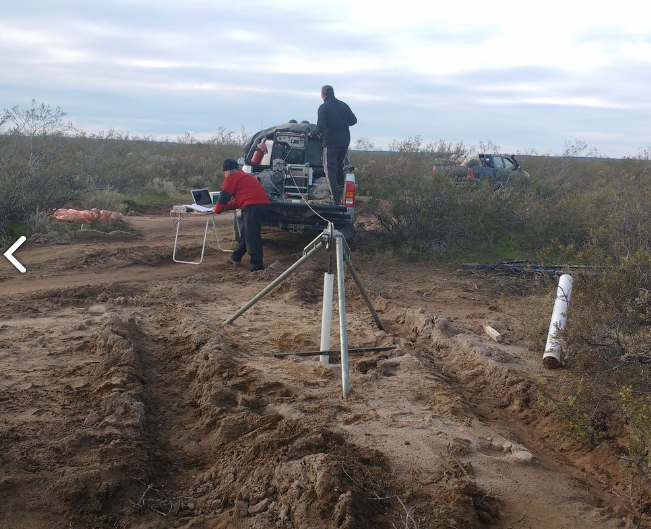 If you like the uranium and vanadium space (I can’t imagine why anyone wouldn’t), Blue Sky Uranium (BSK.V) just dropped news that should pique your interest.

A little background for the uninitiated

This a company run by the Grosso Group, a team that pioneered mineral exploration in Argentina and has operated there since 1993.

This crew boasts four exceptional mineral discoveries in the country. 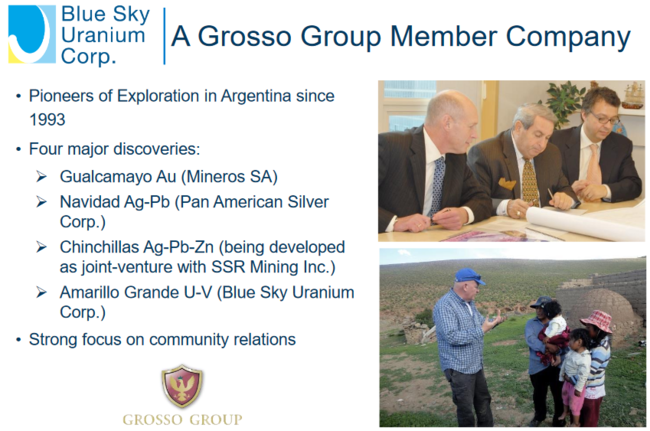 It also has an exemplary track record of cultivating strong relationships with the communities involved.

Having drilled off a significant resource and tabling a positive preliminary economic assessment (PEA) at their wholly-owned Amarillo Grande project in Rio Negro province, Argentina, Blue Sky is pressing ahead with an aggressive exploration campaign designed to add scale to an asset that is destined to grow.

The Ivana PEA, released back in February of this year, demonstrates compelling economics: 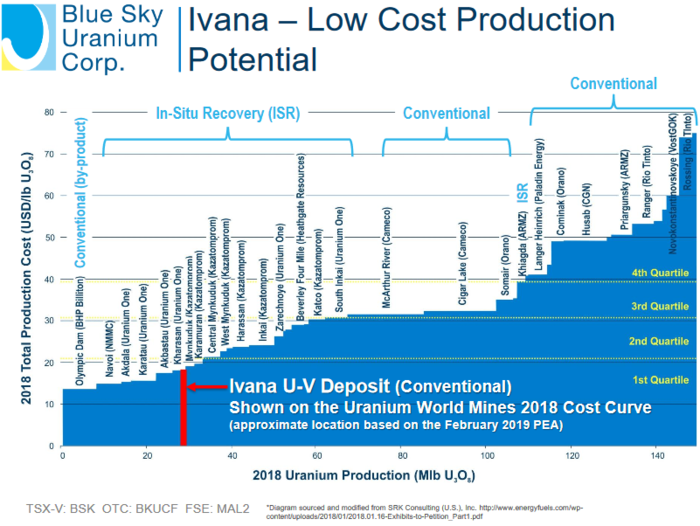 These two milestones provide a solid foundation for this determined management team to strut their stuff, to continue building shareholder value.

Ivana’s mineralization is located at or near surface, and is hosted in loosely consolidated sediments.

Mining this rock will be about as simple as it gets – no drilling, blasting or crushing required. This is why Ivana’s economics are so damn compelling.

But it could get even better. If Blue Sky is successful on the exploration front and grows the deposit by say, 50% (100% is a distinct possibility in this author’s opinion), the next economic study – a prefeasibility study (PFS) – should reflect even better numbers than those tabled in the PEA.

The company has a significant land base with a well established mineralized trend of some 145 kilometers.

Exploration in and around the main deposit area is in full swing. Newsflow promises to be steady for the rest of the year and then some.

Last month we were treated to pit sampling results from an area immediately west of the Ivana deposit:

The above numbers represent outstanding values.

Yesterday, May 16th, we received the following update on exploration activities around Ivana:

This is the kind of development you wanna see in your junior ExplorerCo – a carefully constructed plan, and a will to drill.

This exploration campaign, which includes reverse circulation drilling, is designed to systematically step out from the Ivana deposit and delineate potential mineralization to the west (Ivana West target), while also testing targets in two other key areas – Ivana Central and Ivana North.

All of these high priority targets are within 25 kilometers of the Ivana resource itself (map below): 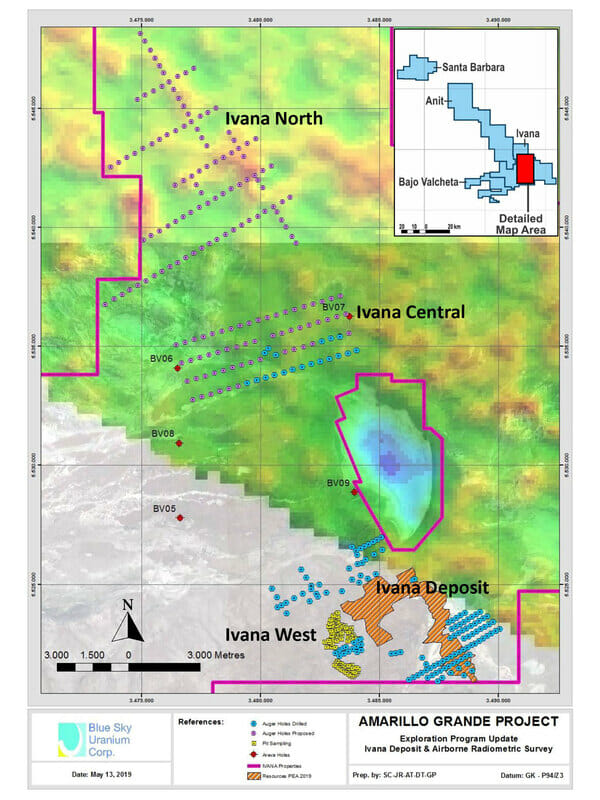 Check the scale on the bottom left of the above map. It’s clear the company’s current exploration efforts will encompass a large area.

This current program will include:

“Following on the heels of our successful PEA for the Ivana deposit, we are continuing exploration with confidence in the potential for discovery of additional deposits that will build value. Our team has made considerable advancements in exploration targeting and all of our results to date confirm significant uranium and vanadium anomalies to the west and north of the Ivana deposit, with additional prospects along the 145km-long exploration trend covered by the Amarillo Grande Project.”

The area of interest to the west and north of the Ivana deposit are “blind” targets with no surface exposure.

Two types of drill rigs are being deployed at Amarillo Grande. If you don’t know the difference between auger and reverse circulation, the following link will help bring you up to speed:

A program consisting of 321 new auger holes is ongoing. The data from this program will be used to fine-tune the positioning of the more costly reverse circulation (RC) drill rigs.

A total of 152 auger holes have been completed since the beginning of 2018 (133 at the Ivana deposit/West and 19 at Ivana Central) totalling 644 metres with an average depth of 4.3 metres. This method is being applied in areas with weak or no superficial radiometric anomalies that have potential for blind uranium deposits and where the basement rock is considered too deep for pit-sampling. The auger holes are drilled to approximately 10 metres in depth, after which the open hole is surveyed with a down-hole radiometric probe; areas with elevated radiometrics are being prioritized for RC drill testing. Prior to the start of the current auger program, the Company conducted augering in a number of areas on the Ivana property, including the Ivana deposit area, Ivana Central and Ivana North (Figure 1). Radiometric probe results from auger holes were partially responsible for the discovery of the Ivana deposit and in some cases have delineated strong near-surface anomalies requiring follow-up RC drilling.

Blue Sky is using good science to further their understanding of Amarillo Grande’s subsurface geology. This discipline ultimately stretches exploration dollar as it helps the company zero in on the highest priority targets.

To further refine drill targets, a 6 kilometer long IP geophysical survey is planned over the Ivana Central and North targets.

“Disseminated pyrite associated with uranium-vanadium mineralization was initially detected by an IP survey at the Ivana deposit, and confirmed with the following RC drill program. Therefore, chargeability anomalies related to disseminated pyrite may be a useful indirect indicator to identify additional zones of buried uranium-vanadium mineralization.”

An RC drilling campaign of roughly 4,500 meters will be executed in two phases.

The first phase will focus on the Ivana West target, a potential western extension of the Ivana deposit. It will also probe surficial uranium-vanadium anomalies, auger-detected anomalies that are open at depth, and air/surface radiometric anomalies at the Ivana North and Central targets.

The second phase of drilling will play off results from phase one and will prioritize areas with the greatest potential to grow the resource at Ivana.

The entire geophysics and RC drilling programs are expected to take approximately six months; both are contingent on the Company raising additional funds.

It’s important to note that this planned 4,500-meter drilling campaign will go a long way – it will punch a lot of holes and cover a lot of terrain as the mineralization Blue Sky is targeting sits just below the surface.

This is an attractive entry point when you consider the newsflow this aggressive exploration campaign is bound to generate over the coming months.

Full disclosure: Blue Sky is an Equity.Guru marketing client. We own stock.