Ceylon Graphite (CYL.V) is an aggressive, extremely well-managed ExpolorerCo. The object of Ceylon’s focus: Sri Lankan vein graphite – the purest of its kind anywhere in the world.

Why graphite? The electric vehicle (EV) supercycle is intensifying – it’s kicking into a whole new gear (no pun intended).

When you think of EVs, you think green. You think energy storage – batteries – because that’s what makes an EV unique.

When you think of EV batteries, you normally think of lithium, nickel, and perhaps cobalt. But you might be surprised to learn that >50% of your EV battery is anode, and the anode is 100% graphite.

Why Sri Lankan graphite? A recent Guru offering on the subject spells it out:

Sri Lankan vein graphite is some of the purest on the planet. It’s also a geological anomaly…

Of all the natural graphite materials, vein graphite is probably the most difficult to describe geologically, and various theories of its origin have been presented. As the name suggests, vein graphite is a true vein mineral as opposed to a seam mineral (amorphous graphite) or a mineral that is disseminated throughout the ore rock (as in flake graphite).

Its high carbon content gives it a distinct advantage over conventional flake graphite ore as the beneficiation effort required to achieve a high-grade concentrate is greatly reduced.

Further, it’s nearly battery grade material in its natural state – the carbon content of Ceylon’s graphite is greater than 90%.

Prior to WWII, Sri Lanka was the largest graphite producer on the planet. This historic production was primitive. It was all ‘hands and rope’ / pick and shovel type mining. And only the soft overburden was mined – production ground to a halt when they hit bedrock.

Herein lies the opportunity for Ceylon.

Having cultivated a tight relationship with the Sri Lankan government, the company has secured a large land package of highly prospective terrain – some 121 square kilometers – representing a wide swath of the island nation.

The company’s land position represents the vast majority of the known graphite occurrences in the country. Hundreds of abandoned shafts, with an abundance of high-grade graphite, fan out across the company’s landholdings.

And as noted earlier, this vein hosted graphite is superior – vastly superior – to anything that is being developed or mined today.

On October 2nd, 2018 the company announced a preliminary resource estimate at its Malsipura Project:

Several low cut-off grades were determined for the block model. With a prioritization of the grade and considering the optimization of the continuity of the mineralized zone, the low cut-off grade of 2% Cg was retained. This permits to calculate a mineral resource of 159,544.05 tonnes averaging 8.15% Cg. This scenario is also identified as the base case for an Indicated Mineral Resource of 37,234.62 tonnes at 9.79% Cg and 122,309.43 tonnes at 2.76% Cg classified as Inferred Mineral Resources. These mineral resources contain all the known lump veins grading between 80.20% and 98.60% Cg over thicknesses ranging from few centimetres to 0.72 m. Their length ranges from few metres to a maximum of 75 m. A total of 13,000 tonnes of Carbon Graphite is contained within the mineralized envelope.

Over the past year and a half, the company has uncovered numerous new veins. This May 15th discovery news is yet another example of the pervasive nature of the high-grade vein structures crisscrossing Ceylon’s huge land position.

This new discovery – a natural crystalline graphite vein over 30 centimeters in width and nine meters downhole –  was discovered while digging a ventilation shaft at the company’s M1 site.

“We are delighted at this discovery; it shows that our mapping is correct and that we anticipate a major find as shown in blue above. We now have identifiable graphite at surface and below the surface in the overburden. A 30 cm (one foot) vein is impressive by any standards. This discovery coupled with the veins we discovered earlier in the year at our other sites clearly demonstrates that Ceylon Graphite has a large resource base. We feel the M1 site will be one of the largest in Sri Lanka. Our plan to start commercial production at our K1 site imminently is nearing fructification and we hope to start producing at M1 by the fourth quarter.”

Development of this vast network of high-grade vein graphite is ongoing.

The company has applied for a mining license for its K1 project.

Ceylon’s Bharat Parashar doesn’t want to speculate on exactly when they will receive said license, but it’s safe to say they are close as the Sri Lankan government is sufficiently motivated to move things along – they know what modernizing their graphite industry will do for the country.

Ceylon is on the cusp of production.

I highly recommend tapping the link below where CEO Parashar and our very own Chris Parry talk about this uniquely positioned company in detail.

Over the next year or two, there will be three or four graphite companies going into production worldwide.

Ceylon will be one of them.

To highlight the economics of what Ceylon has – to add a little perspective – Syrah Resources put its Mozambique project into production at a cost of roughly $650M. Syrah will produce between 60,000 and 70,000 tonnes of graphite per year.

Now get this: Ceylon’s first targeted production will be 4,000 tons per year, but will be brought online at a mere $2M. With multiple near-surface high-grade production scenarios in Ceylon’s crosshairs, the economics here are extremely compelling.

The company’s timing couldn’t be better… 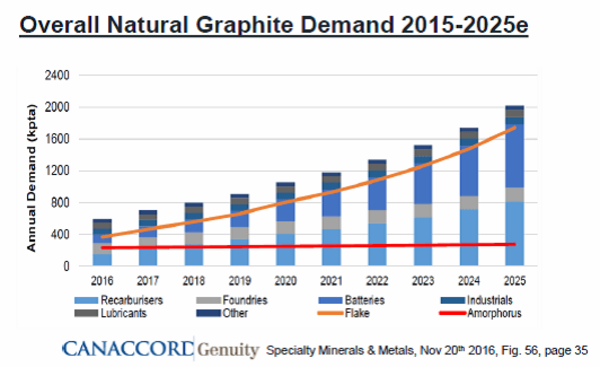 And then there’s this:

Though this new law seeks to limit reliance on foreign sources of the mineral, it demonstrates just how “critical” graphite has become this day n age.

With roughly 54.77 million shares outstanding and a market cap of $7.39M, this has to be considered one of the better risk/reward plays in the battery metals/minerals arena.

Full disclosure: Ceylon Graphite is an Equity Guru marketing client. We own the stock.