Ask anyone who has more experience growing cannabis than a sophomore college student whether they’d be keen to grow a million square feet of weed, and they’d likely point out the problems inherent in such a task.

Automation is nice. Hordes of newly trained staff are fine. Hooking up to a nuclear power station and having 100 middle managers is okay I guess.

We’ve all heard the horror stories. The stigma is real.

Clearly the government is upset that all us “potheads” weren’t as stupid as they thought. Since these LPs can’t tell the difference between low quality poorly grown weed and good weed they assumed their customer base was just as clueless and overpay for a crap product

For starters let’s tlk about the black smoke LP weed produces on first light. That means chemical spray was used on the bud itself. That Wil kill your lungs and throat and make the smoke very harsh.
Let’s talk terpenes. LP bud is low quality.

Some of the larger Licensed Producers have made headway (no pun intended) on this. Supreme Cannabis (FIRE.T) has garnered much respect for a quality product, and Organigram (OGI.V) is selling a bunch of theirs, perhaps because consumers want organic product and are seeking it out.

But, for the most part, the larger producers have seemingly accepted their product will be lesser than what many consumers are used to, when buying from ‘a guy behind a dumpster’ instead of ‘a guy behind a suit.’

And the market is split as a result.

Ugggh that group (if it’s that group) needs a blanket “no ‘LPs are trash/garbage weed/poison peddlers’ OR ‘grow your own!’ postings or responses” policy. WE GET IT, YOU SMOKE GOLDEN AMBROSIA OF THE GODS THAT YOU BIRTHED YOURSELF & YOU ARE A WEED ANGEL 🙄

Some smaller players, like GTEC Holdings (GTEC.V), have pushed back against that ‘LPs make bad weed’ perception by rolling up (no pun intended) smaller growers and planting a flag in the quality weed market, while also picking up dispensaries so they can really connect with the consumer.

GTEC Holdings is a specialized cannabis company dedicated to cultivating ultra-premium quality cannabis in purpose-built indoor facilities. [..] The Company has two additional facilities coming on stream in the latter half of 2019, which will increase annual capacity from 4,000 kg to 14,000 kg.

Keeping things small and manageable, with multiple grow teams and distinct focus, is a nice step forward for a business that has largely left the enthusiast consumer behind of late.

But Pasha Brands (CRFT.C), which is public any second now, is taking a hard run at bridging the gap between ‘government weed’ and ‘weed from a guy’ by reaching out to those prohibition brands and growers that built up a connection to their audience, and helping them transition to the white hat market.

If they can pull that off, it’ll be a fuckin’ barnburner.

Before the LPs came along, teams of bright entrepreneurs who weren’t afraid of picking up a rap sheet, grew weed for a good price, with a high quality.

But, for the most part, BC Bud became a global brand – the only global brand, really. Well, other than Kentucky Ditchweed and Miami Angel Dust Sprinkle Surprise.

When the LPs showed up, a lot of the old guard that didn’t have neckbeards put on a suit and made bank. But a lot didn’t. A lot kept growing under the old MMAR regs, some fed dispensaries, some kept their cancer patients alive, and figured the big money bus had left without them.

Pasha Brands just showed up with a new bus. 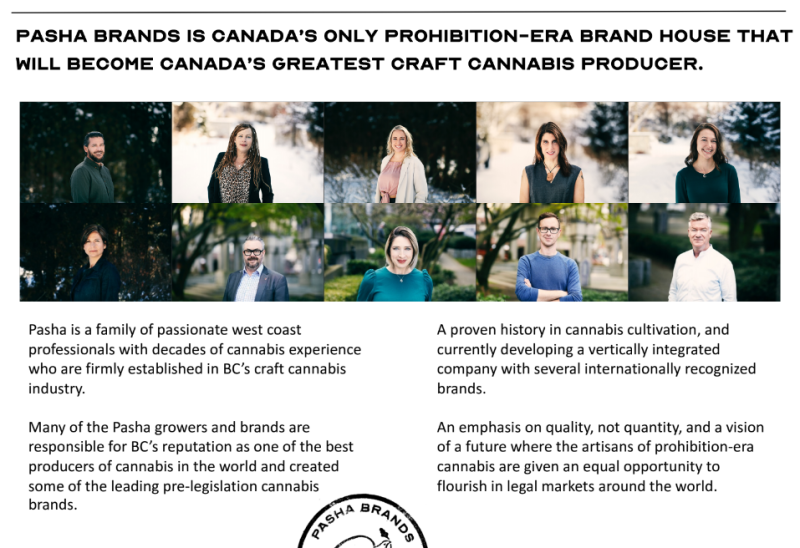 Pasha’s subsidiary, BC Craft Supply Co. Ltd, is an LP applicant looking to develop a craft cannabis campus, bringing brands and people who had extensive grey market sales networks into a new deal, offering a cultivation nursery, processing facility, and analytical testing lab into the mix so that ‘your guy’ can feed their knowledge and dedication into a bigger sales pipeline.

The key here is a new category for producers that the big boys have all but ignored; Micro Cultivators (MCs)

MCs can’t sell to the public. But they can sell to LPs. 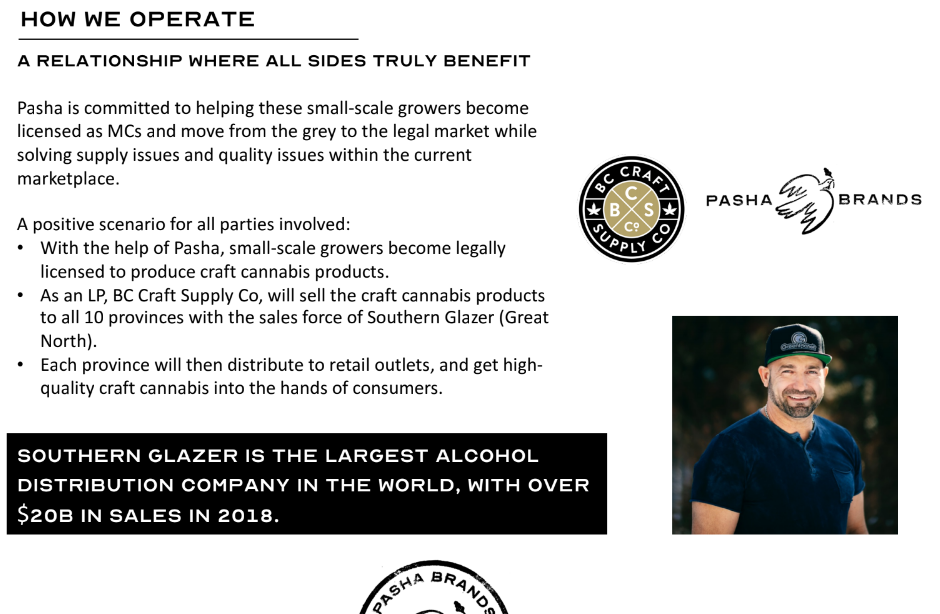 Frankly, this is genius. Pasha doesn’t need to build suburb-sized greenhouses and pay desperation dollars to acquire companies years from profitability. They just build the one campus and invite the best of the best to, for want of a better term, sharecrop with them.

You grow it, we process it, analyze it, and ship it.

In doing this, Pasha plans to keep things as local as they can, until the product is ready to ship. Pasha expects the MCs to produce around 500kg of flower per year, and figure they’ll bring in revenues of $2.5 million for each of them. 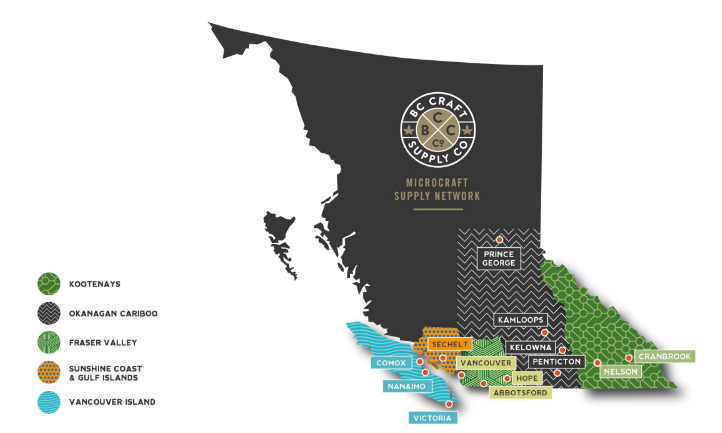 On the lab side, Pasha has a $1.2 million Health Canada certified mobile laboratory that they can take out to the site to help with hitting Health Canada standards. That’s way more muscle than any grey marketeer can normally muster, at least without a Toronto securities lawyer spinning them into a shell company of their own.

On Vancouver Island, Pasha will run a campus to help train the potential MCs in hitting acceptable standards and compliance, putting the finishing touches on what, for many, is a decade or more of self education.

According to the company, the brands they’ve gathered, illicitly, produced some $140 million in unaudited revenues before beginning the ‘come in from the cold’ process.

Let’s be clear; Health Canada is on side with this plan, because the last thing they want is to be running all over hell’s half acre chasing Drunk Uncle Teddy around the back 40 because he didn’t use the premium baggies when he shipped his OG Ultraman Blood Orange Dawg to Aurora.

Look, I’m no massive weed homer. I enjoy a single puff of CBD heavy vape before I go to bed and I sleep like a baby. If you told me it was Strawberry Tropical Chunk or Apollo’s Classic Caviar (I’m having way too much fun with the cannabis strain name generator, obviously), I wouldn’t know the difference.

But I’ve heard of Beard Brothers.

And I’ve heard of Grizzlers pre-rolls.

Pasha isn’t just walking around tossing dough to anyone in a Legalize It shirt and claiming they’re bigger than they are. They’re curating the curators.

They’re also curating their board.

Rosy Mondin is one of my favourite cannabis people, having founded and runs Quadron Cannatech (QCC.V), which just got acquired by World Class Extractions (PUMP.C), while fellow board member Scott Walters is a former CEO of THC Biomed, Empower Clinics, and Canabo, and is currently an indie board member of Supreme Cannabis (FIRE.T).

Any board featuring those two is one I want to be invested in.

In an industry a little short of new ideas right now, I can appreciate the hell out of a plan that says, let’s talk to the real pros of the industry, the ones the market has left behind, and put together a way for them to not only transition to fully licensed, but also to compete with LP weed on its own terms.

I love this. I’m in. Public any day now.

FULL DISCLOSURE: Pasha Brands, Supreme, and GTEC are Equity.Guru marketing clients, and we happily hold stock in all three.