In a recent Guru offering, we suggested that Blue Sky Uranium’s (BSK.V) Ivana deposit was destined to grow, perhaps dramatically so:

“On the subject of growth, and this might be considered one of the better catalysts going forward, Blue Sky boasts heaps of (exploration) blue sky – numerous high priority targets are slated for a proper probing with the drill bit in the coming months.”

Today’s news both confirms and fortifies that latent subsurface potential:

Before we dive into the news, a quick refresher:

These solid numbers are good for 13 years worth of uranium and vanadium production.

The following slide from the company’s i-deck shows where Ivana currently sits on the ‘Uranium World Mines 2018 Cost Curve‘, a measure of the Ivana’s production costs (per lb of U308).

And yes, holding a position in the 1st quartile is right where we wanna be.

Another supporting factor: the near certainty of higher U308 prices going forward.

The following slide from the company’s i-deck makes a strong case for higher prices. 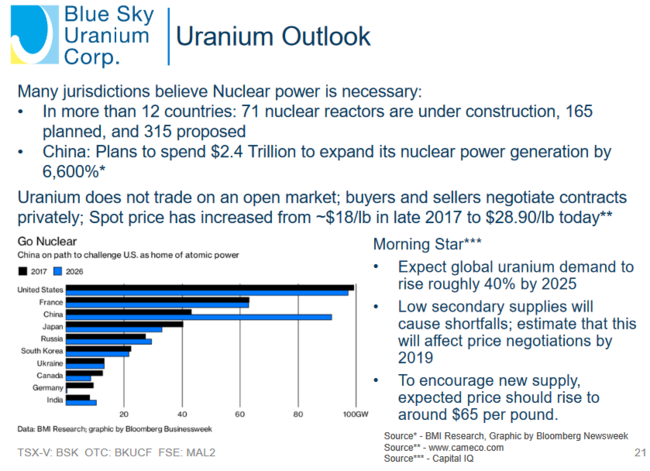 What’s really going to move the needle for this stock, aside from firmer commodity prices and enhanced economics, is success on the exploration front.

Back to the Apr 29th news

“The recent robust preliminary economic assessment for Ivana provides a strong foundation for the Amarillo Grande Project. As we advance the Ivana deposit, we are also continuing our exploration work, and these results indicate the potential for further expansion in the immediate deposit area.”

The news reported on high-grade uranium and vanadium values from a pit sampling program carried out in the area immediately west of the Ivana resource.

This method of sampling, where pits are hand dug from surface down to a maximum of 2.9 meters, is an inexpensive and effective approach to exploration.

Highlights for composite channel samples collected from pit walls include: 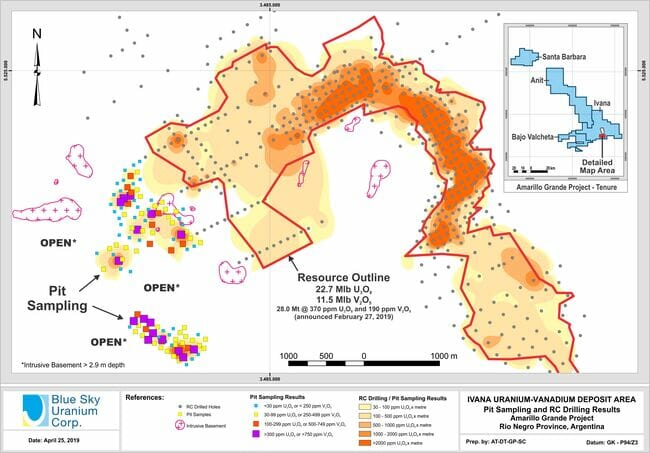 The map above shows off the new areas of mineralization (bottom left) relative to the Ivana deposit itself (outlined in orange). Note of the scale on this map.

These are exceptional results.

Impressive geological sleuthing fellas. This is getting interesting.

This newly-identified near-surface mineralization is open to expansion, as indicated on Figure 1, but drilling is required for further testing as the target zone is interpreted to be at greater depth in adjacent areas.

If the company is successful in delineating a high-grade sweet spot sporting similar values adjacent to or within the overall Ivana resource, the entire economic picture stands to improve markedly.

It’s also important to note that all of Ivana’s mineralization discovered to date is located at or near surface, and is hosted in loosely consolidated sediments. This simplifies the entire mining process as no drilling, blasting or crushing will be required.

The slide below highlights Blue Sky’s exploration potential on a much a larger scale. Note the 145-kilometer long mineralized trend.

It would appear that Amarillo Grande’s surface has barely been scratched. 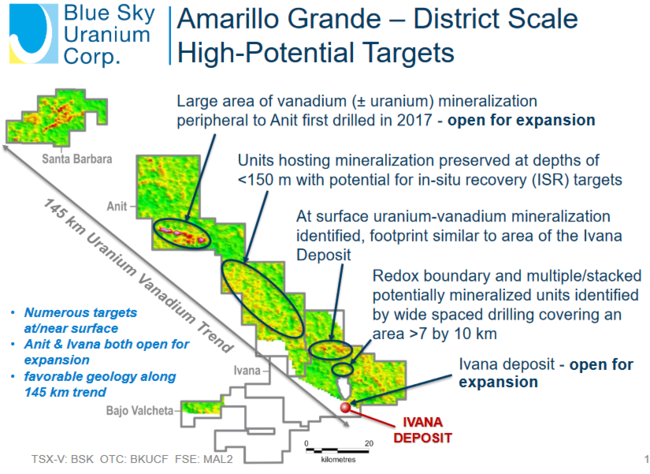 Look for the company to continue expanding the known resource and homing in on new zones of mineralization over the next six to eight months. They have no shortage of high priority targets to test with the drill bit.

If you want to learn more about this exceptional U308-V205 ExplorerCo, the following articles and podcast will help bring you up to speed:

The company’s market cap currently sits at a modest $23.06M based on its recent trading range, last closing at $0.21.

With exploration results like those tabled above, the stock has every reason to push higher.

Full disclosure: Blue Sky Uranium is an Equity.Guru client. We own stock.