Rockridge Resources’ (ROCK.V) investor deck bears the title, “A Fresh Look at Historical Districts: One of Canada’s Newest Copper Exploration Companies.” Aside from a highly prospective copper asset, this company has a lot of depth, and a lot of upside potential.

The above chart shows copper bouncing nicely off the lows registered in late 2018, taking out minor resistance in the $2.80 to $2.85 area, now consolidating recent gains just shy of $3.00.

Zeroing in on the price action from the beginning of this year (far right on the same chart), we have one of my favorite price patterns in play – a bull flag.

The bull flag is a favorite of mine due to its simplicity, logic, and its tendency to resolve itself with a very satisfying upward trajectory.

Regarding new technologies, this according to Reuters:

So-called smart-home systems – such as Alphabet Inc’s Nest thermostat and Amazon.com Inc’s Alexa personal assistant – will consume about 1.5 million tonnes of copper by 2030, up from 38,000 tonnes today, according to data from consultancy BSRIA.

With this burgeoning demand, can new production keep pace?

A Million Tons of Copper Is on the Way: It May Not Be Enough

It seems to me the copper price has only one direction to travel, long term – UP.

Rockridge’s focus is the acquisition of copper assets, but it’s limiting its search to historical districts, those that have yet to see a contemporary approach to exploration.

Rockridge’s 85,000-hectare flagship project – Knife Lake – resides in Saskatchewan, a Canadian province ranked in the top three of the Fraser Institute’s annual mining survey of mining jurisdictions. Eliminating jurisdictional risk should be at the very top of every investor due diligence list, right up there with the quality-of-company-management (more on this further down).

In Nov. 2018, ROCK entered into an option to acquire a 100% interest in Knife Lake from Eagle Plains Resources (EPL.V). There’s a story behind how Eagle Plains came to acquire this project – it was a seriously deft, heads-up kinda move.

The price of admission – the cost of acquisition – was less than one penny per lb of copper. Nice shooting there Tex!

Favorably positioned in the Flin Flon-Snow Lake mining district, one of the more prolific greenstone belts in the country, Knife Lake saw extensive exploration from the late 1960s to the 1990s with the last documented work program completed in 2001.

We love VMS type settings here at Equity Guru. These deposits commonly occur in clusters: where there’s one deposit, there are likely others. A highly desirable geological characteristic, this.

A great VMS primer can be found by tapping the link below:

Of the more noteworthy historical drill results at Knife Lake, these two stand out: 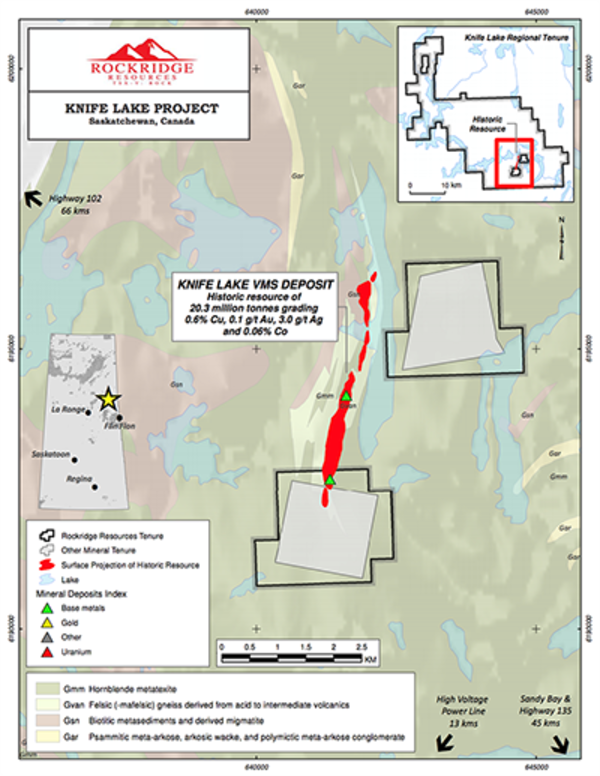 Note: the above resource is “historical” and does not comply with NI 43-101 standards.

You might be wondering, “why did Leader Mining walk away from the project after such a great start?” Good question. This long-term copper price chart tells the tale:

A fresh look at Knife Lake in a $3.00 copper environment

The Knife Lake deposit itself is open along strike and at depth. Most of the historic drilling quit at 100 meters.

Knife Lake’s 85K hectares are ripe for new discoveries. The property has yet to see a real state-of-the-art exploration campaign. 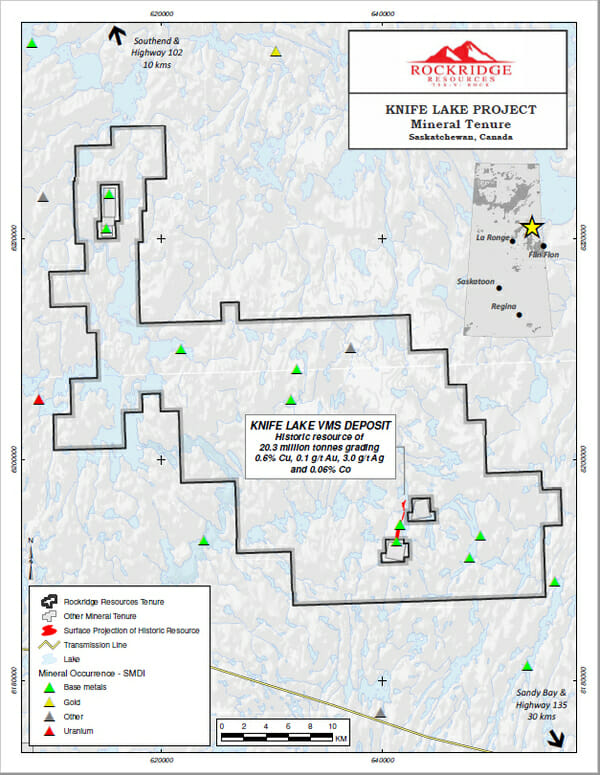 Groundwork and sampling – analyzing rock geochemistry to identify prospective VMS style hydrothermal systems – will be conducted property wide; as will following up on historic conductors, alteration and mineralization at regional targets.

Do you find yourself lost with some of these esoteric terms? I got yer back…

“The commencement of drilling is a significant milestone for Rockridge as we look to position the Company as a go-to copper and base metal exploration and development company in Canada. The historical Knife Lake Deposit returned some notable drill results and there is still robust discovery potential around it and regionally. This inaugural drill program represents the first meaningful exploration carried out on the project in over sixteen years as we execute on our strategy of going back into overlooked projects in favourable jurisdictions with modern exploration techniques and methodologies to make new discoveries.”

This initial program, the first real work conducted on the property in nearly two decades, will consist of roughly 1,000 meters in eight to ten diamond drill holes. The objectives: confirm the tenor of mineralization reported by previous operators and expand the known zones of mineralization.

As noted earlier, the majority of the historic drilling was relatively shallow, up to 100 meters below surface. Future programs will test the mineralization at depth.

The goal is to produce a NI 43-101 compliant resource estimate by year-end.

News will begin to flow out of Knife Lake within the next few weeks. Assays will be released in batches.

These are exciting times for the company and its shareholders. We may have some high-grade Flin Flon-Snow Lake copper on deck here.

I could write an entire chapter on this crew and still not do them justice.

This is the same camp as Aben Resources (ABN.V), Cypress Development (CYP.V), and Skyharbour Resources (SYH.V). That alone should be enough to pique your interest.

Looking over the lineup, I immediately homed in on Ron Netolitzky, ROCK’s strategic advisor. Knife, as we stated above, is a VMS deposit. Ron was one of the key players behind Eskay Creek, a famously rich VMS deposit in BC’s Golden Triangle.

“I am excited to work with management and the geological team at the newly formed and well-structured Rockridge Resources. I have worked in the area around the Knife Lake Project and believe there is robust discovery potential there which the Company plans to test with its upcoming drill program.”

Joseph Gallucci, a recent hire, is another name that jumps out:

“Mr. Gallucci is a capital markets executive with over 15 years of experience in investment banking and equity research focused on mining, base metals, precious metals and bulk commodities on a global scale. His career has spanned across various firms including BMO Capital Markets, GMP Securities, Dundee Securities, and he was a founding principal of Eight Capital where he recently led their Mining Investment Banking Team.”

Mr. Gallucci has years of experience as an investment banker and research analyst with a focus on Canadian base metal companies. His expertise in corporate finance, mergers and acquisitions, and capital raising will be invaluable to the company as we look to create shareholder value through new mineral discoveries and the advancement of projects in geopolitically favourable jurisdictions like Canada.”

With a talent pool this deep, you gotta know management has their eye on further acquisitions, perhaps along the same greenstone belt.

With Gallucci’s contacts in the industry – Trevali, Osisko, Hudbay –  ROCK stands a good chance of acquiring advanced-stage projects on similar terms as Knife Lake (< $0.01 per lb Cu) by tapping into the non-core asset portfolios of these larger mining companies.

The company coffers are stoked to the tune of $2M – a tidy sum.

Knife Lake is on the verge of delivering its first set of assays. Additional acquisitions may be in the offing.

Full disclosure: Rockridge is an Equity Guru client. We may own the stock at any given time.