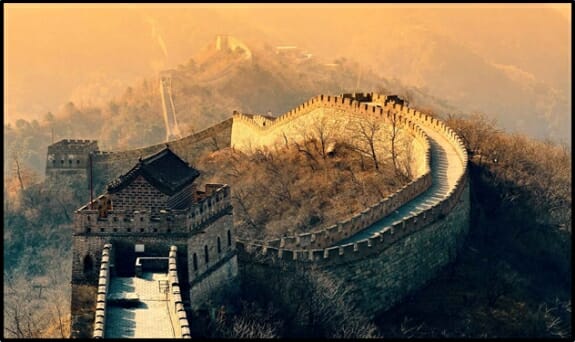 Beijing – On April 5, 2019 Financial markets in mainland China and Hong Kong were closed for the Qingming holiday, or “Tomb Sweeping Day”.

Falling on the 15th day after the Spring Equinox, Chinese families visit the tombs of their ancestors to clean the gravesites, pray to their ancestors, and make ritual offerings.

In China, as in the west, trade talks with the U.S. have dominated the financial news.

Chinese Vice Premier Liu He said “a new consensus had been reached between Beijing and Washington on U.S.-China trade”.

On the Nikkei 225, companies that trade heavily with China saw modest gains: Fanuc – a producer of factory automation (FA) machinery was up 1.21% and Hitachi Construction Machinery a developer of construction equipment advanced 1.15%.

“The trade deal has already been priced in, around 80%,” stated one Asian strategist, “Until there is a specific date, I wouldn’t be that optimistic.”

While the U.S. peeks timidly up its own butt-hole, China is finding new partners, new markets, new revenue streams.

China’s $1 trillion “One Belt, One Road” initiative is the largest mega-project in history. A network of highways, train-lines and seaports covering 68 countries that contain 65% of the world’s population, driving 40% of the global GDP.

This week Forbes Magazine announced that 21 Chinese investors “made it into the top 100 venture capitalists globally”, breaking the previous record of 17 domestic investors

The list is constrained to companies that have been acquired for at least $200 million, or that have raised funding of $400 million.

“The increasing presence of Chinese investors in the Midas List is a solid reflection of the scale and vigor of the Chinese economy,” stated Zhou Xuan, a Beijing economist.

This week the Chinese government announced that China’s manufacturing PMI rose to 50.5 in March, 2019 from 49.2 the previous month.

The Asian Development Bank predicts that China’s 2019 economic growth will be 6.3%.

According to the World Bank, the Chinese economy contributes about 30% to global GDP growth annually, compared to 10% from the U.S. and 8% from Europe.

“Tomb Sweeping Day” has been observed by the Chinese for over 2500 years. It only became a public holiday in mainland China in 2008.

If a Beijing economic policy appears to make no financial sense, look at through the lens of culture – and it may come into focus. 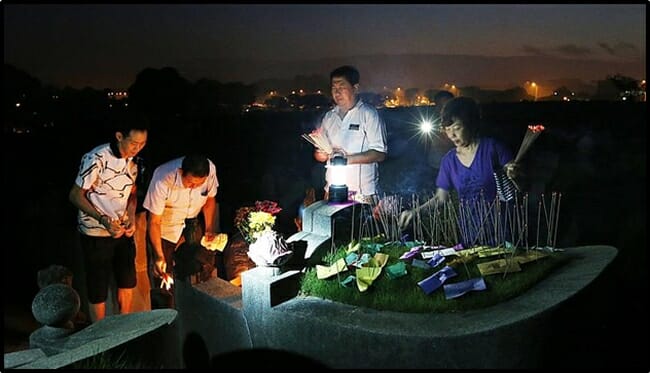 Fujian Province – This week, Chen Shulong (56), a former vice-governor of Anhui province, was convicted of “bribery, abuse of power and insider trading.”

The charges are similar to those of U.S. junk bond crook, Michael Milken who pleaded guilty in 1989 to felony charges of bribery, embezzlement and violating U.S. securities laws.  Milken paid a $600 million fine and served 22 months in prison.

Chen – who was convicted of accepting more than 275 million yuan ($41 million) in bribes – lost all his worldly belongings and was sentenced to life in prison.

In China – with rare exceptions – “Life in Prison” means you die in prison.

First a manager of an investment company, then vice-mayor of Hefei, Anhui, and later provincial deputy governor – he awarded contracts in exchange for bribes.

He was also convicted of causing financial losses to the government of 2.9 billion yuan ($580 million) in “various illicit property transactions.”

China is not skittish about imprisoning rich powerful people.

Chen confessed to his crimes, relinquished his assets, and expressed remorse in court,” according to China Daily.

Before heading to prison for life, he implicated 100 other crooked officials.

“To truly resolve public anxieties about corrupt officials, it is not enough to stage high-profile arrests and trials,” stated one China critic, “Our society has grown increasingly polarized between the rich and the poor. Any attempt to tackle corruption that does not account for these feelings will never succeed in restoring the people’s faith in the government and its institutions.

Chen admitted he was the worst kind of scoundrel, and vowed not to appeal to a higher court. 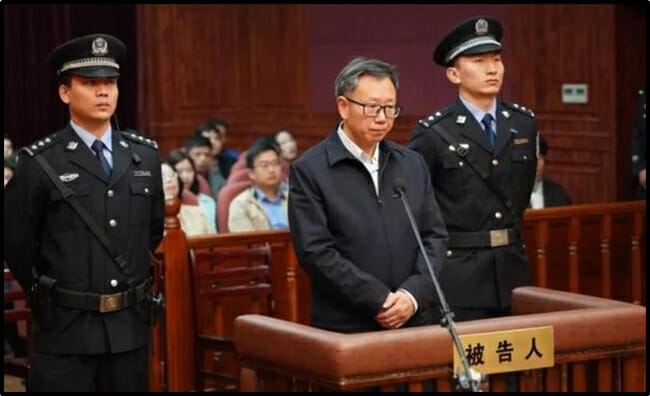 Changzhou, Jiangsu Province – zoo-goers in eastern China, got pissed off when they paid 180 yuan ($27) to visit a zoo only to find an orangutan and black bear were being “cosplayed by employees as part of the zoo’s April Fool’s joke.”

Cosplay is when adults dress up in costumes and pretend to fictional characters or animals.  Some people find it sexy.  It’s not okay to laugh.

“Sometimes people are miscast in life,” stated Mother Jones, “They may appear to be dentists or clerks, but deep down they are actually fierce swordsmen or goddesses with devastating sex appeal. These true selves can emerge in the world of cosplay.”

Two employees at the zoo decided to wear an orangutan and black bear costume and sit in the real orangutan’s enclosure.

“The fake orangutan and bear were not authentic looking as they lounged in a tire swing or sat in silence on the ground,” stated a local news report.

Onlookers spotted the “real orangutan” locked behind a fence “jumping up and down”.  Numerous Chinese “net-citizens” surmised that the real orangutan felt belittled.

“Visitors had a lot of complaints,” stated the reporter, “A mom said her child was disappointed after seeing the fake animals, noting the employee’s acting was more than a little lethargic.”

Despite complaints, the zoo defended its yearly April Fool’s gag.

“We will continue to promote the cosplay to interact with visitors,” said Lin Lixun, an employee in the zoo. 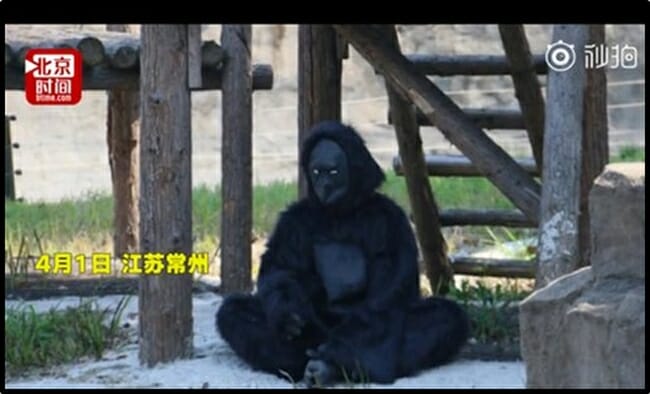