Why did this American legend just short Canadian banks?

Every investor is in the prediction business.

We buy a stock because we believe we can sell it at a higher price in the future.

We “short” a stock because we believe we can buy it at a lower price in the future.

Making stock market predictions is like trying to guess the vocation of new-born baby.

Genetics, socio-economics and temperament may suggest: “academic” “lawyer” or “engineer” – but the little bugger could end up being a jazz saxophonist, the director of a homeless shelter – or dead from a fentanyl overdose.

A complex array of external variables, make it almost impossible to predict the professional trajectory of the new born baby.

In our quest to peek into the future, investors often seek the opinions of experts who have a track record of accurate predictions.

In the above examples, lady luck may have played a significant role.

A legendary expert named Steve Eisman just made a bet against Canadian banks.

Eisman believes that Canadian banks have lent too much money to home-owners in an over-heated housing market.

“I’m calling for a normalization of credit that hasn’t happened in 20 years,” stated Eisman.

Eisman is not your normal expert.

After an exhaustive 2007 investigation, he made a massive bet against the U.S. housing market – shorting Collateralized Debt Obligations (CDOs) and booking a $1 billion profit.

In the feature film, “The Big Short,” Eisman (re-named Mark Baum) was played by Steve Carrell.

“Eisman wants to punish people who are doing the wrong thing,” stated Carrell about his character insights, “But at the same time he knows – if he’s right – he’s going to benefit.  So, it’s not completely altruistic.  He’s tortured.” 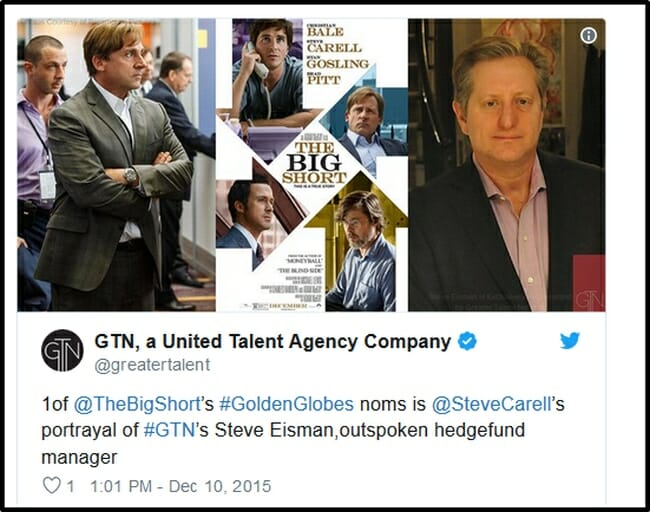 Eisman is no braggart.  In TVs interviews he frequently responds to questions saying, “Haven’t studied that, can’t comment”.

In a recent Financial Times interview Eisman stressed that he does not consider the current situation to be as financially toxic as the U.S. 2008 sub-prime mortgage fiasco.

“This is not ‘The Big Short: Canada’”, stated Eisman, “I’m not calling for a housing collapse.” Eisman is betting that Canadian bank stocks are going to tumble.

Toronto’s TD Bank is currently the biggest target for short-sellers, having seen bets against its stock rise to $3 billion since January, 2019 – up 17%.

“In Canada, bankruptcies are up a little bit and we do see a little bit of rise in delinquency in our retail cards in the U.S.” stated TD’s unphased CFO, “None of them would rise to the level of being of particular concern for us.”

Editor’s note: When a CFO uses the phrase “a little bit” twice in the same sentence as “bankruptcies” and “delinquency” – your Spidey-senses should be tingling. 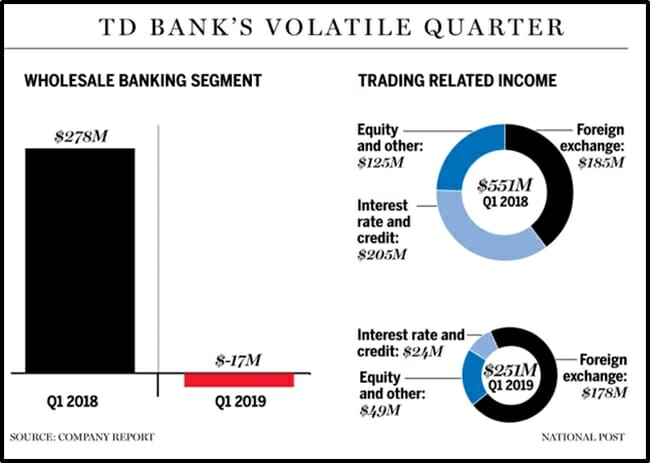 “A lot of the impairments that took place this quarter felt like unique events,” stated CIBC’s Chief Risk Officer about $338 million in bad loans. “We’re not seeing any systemic or any trends of concern in our book.”

CIBC Capital Markets had earnings of $201 million, down 38% from a year earlier, due to lower revenue from equities and higher loan-loss provisions.

To explain the downturn, some real-estate experts have suggested that it is simply too cold to buy a house.

“February saw severe winter weather in both Toronto and Vancouver that may have played a role in keeping potential buyers and sellers on the sidelines,” stated TD Bank economist Brian DePratto, “The true test of market health will come with the warmer spring weather.”

Looking under the hood of Canada’s real-estate market, there are other signs of mechanical malfunction.

Transparency International Canada (TIC) claims that criminals are “snow-washing” billions of dollars through anonymous purchases of luxury homes in Toronto.

“Bring your dirty money to Canada and it will be cleaned like the pure white snow,” stated James Cohen of TIC.

TIC discovered that in the last decade “privately-owned corporations spent $28 billion on luxury residential homes (those worth between $7-10 million)” without identifying the beneficial owners.

An astonishing 65% of Toronto homes worth more than $9 million have invisible owners. 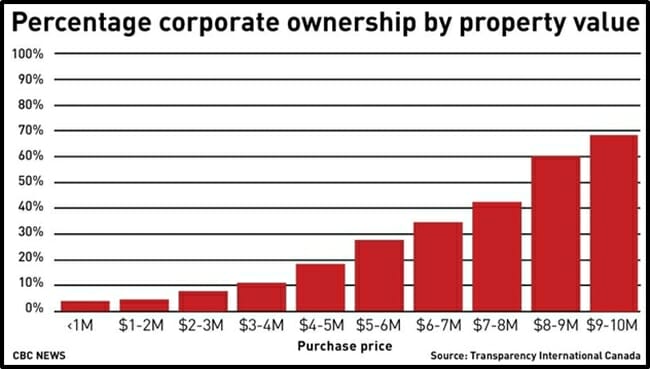 “We have heard this song many, many times before,” stated BMO Chief Economist Doug Porter about Eisman’s negative bet, “Loonies and Housing and Budget Bears, Oh My!”

He saw the warning signs in the CDOs, conducted forensics, designed tests, and tripled-checked his theory using old-fashioned journalistic techniques – before declaring that the system was mortally wounded.

The institutional profiteers of the Canadian financial industry are telling you there is no cause for alarm.

Time will tell if Eisman is right again.

If he is, the ripple effect will impact many Canadian investors.