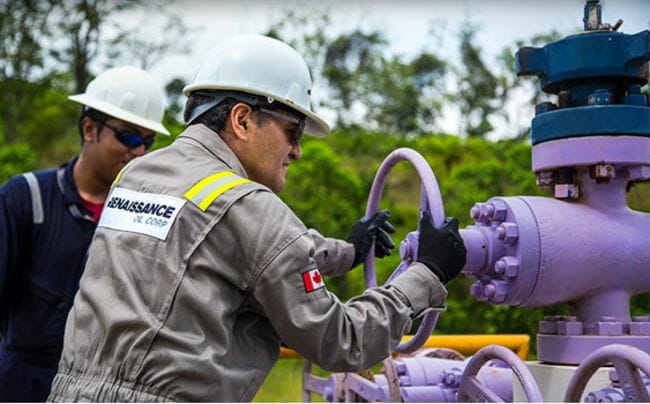 In a recent thought-provoking interview with Equity.Guru’s Chris Parry, Brian Williamson, Jericho Oil’s (JCO.V) CEO, reminded us that oil is probably the most geopolitically sensitive commodity there is. He also reminded us that we haven’t experienced a serious geopolitical shock in over a decade. 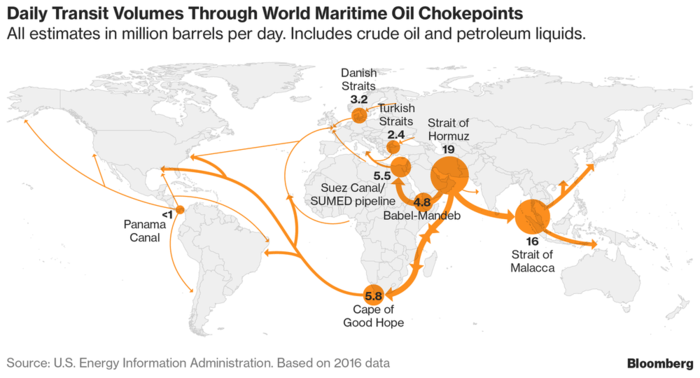 If conflict breaks out and threatens any one of our major shipping channels, now that the US has achieved energy self-sufficiency and isn’t patrolling foreigns waters with its usual gusto, the price of oil could go on a serious tear.

Currently, the price of West Texas Intermediate (WTI) is building on recent strength, testing the $60.00 level in a chart pattern that’s looking pretty damn fine – a series of higher highs and higher lows:

Oil’s next stop is anyone’s guess. We could see some consolidation in and around the $61.50 level according to the trendline I drew above.

An opportunity in our stable of undervalued O&G micro-caps

After PEMEX, ROE is the third largest O&G producer in the country having been contracted to operate more on-shore blocks than any other independent company.

Slide number five from the company’s investor deck outlines the potential of this prolific onshore block:

Courtesy of Renaissance’s i-deck, this one

These Upper Jurassic Shales are the major source-rock for the worlds largest offshore oil field, not to mention THE most prolific oil well –  Cerro Azul-4 – ever put into production. 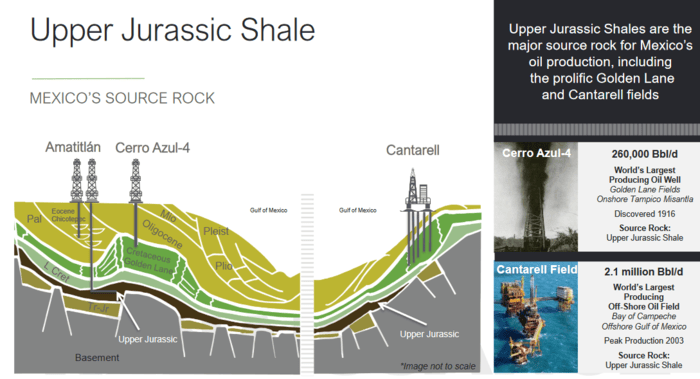 Renaissance’s 60,000 acres at Amatitlán, positioned in the heart of Tampico-Misanlta, shares the same geology as Cerro Azul-4. Its proximity to these geological marvels is reason enough to shortlist the company.

Renaissance’s partner in Mexico is Russian oil giant LUKOIL, a monster in the oil sector boasting production of 1.7 million b/d in operations and subsidiaries in over 40 countries around the world. (Mexico’s PEMEX is also along for the ride).

It’s important to note that Renaissance holds an option to increase its position in Amatitlán to 62.5%. It also holds a right of first refusal to acquire an interest in a 61,000-acre block adjacent and to the north of Amatitlán.

Looking at the company’s current share price, I don’t believe it adequately reflects the value of this technical team – not even remotely. 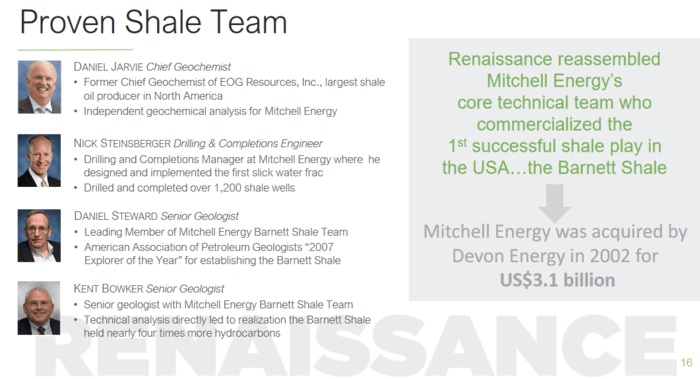 The blocks Upper Jurassic shales share many geological similarities to the Eagle Ford Shale in the US but are much thicker – 3.3 times thicker – giving Amatitlán heaps of economic potential. 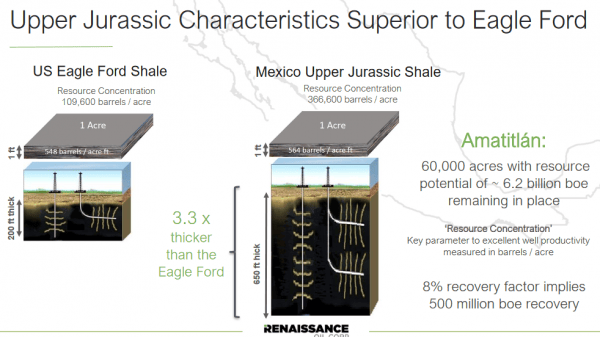 Renaissance drilled eighteen wells last year accounting for roughly 11% of all the wells drilled in Mexico. Seventeen of these wells were brought into production. Number eighteen tested the deeper Upper Jurassic shales at Amatitlán.

Jarvie’s analysis shows the Upper Jurassic Formation at Amatitlán is well positioned in the volatile oil zone and rich wet gas zone – the sweet spot if you will. His analysis also suggests that this prolific formation is continuous as it thickens from east to west. The findings from this detailed analysis will set the stage for an aggressive drilling campaign scheduled to begin in 2H of this year. 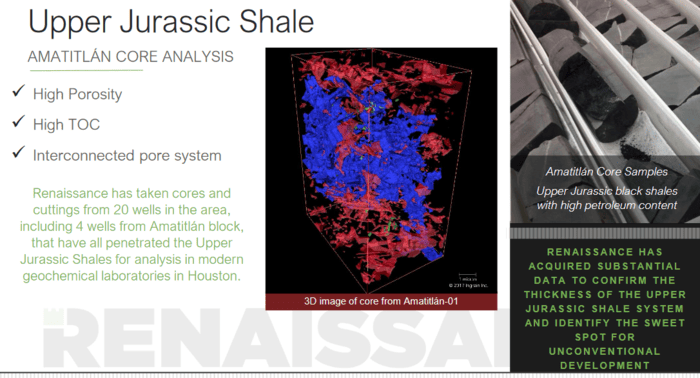 Slide number 14 from the company’s investor deck demonstrates the shale play valuation lifecycle which could apply to the Amatitlán block: 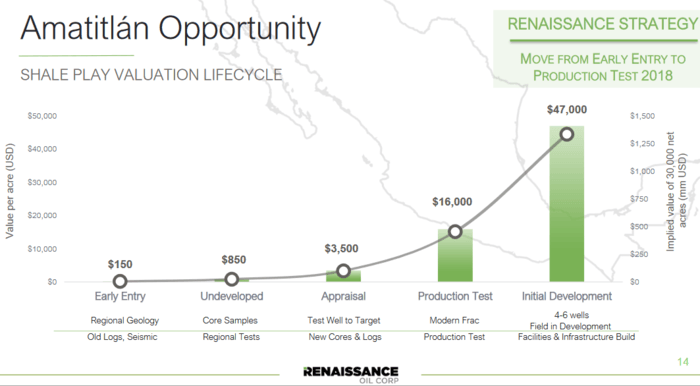 By 2021, we expect the project to be free cash flow positive and therefore able to self-finance all remaining capital expenditures.

Do note that we are being very conservative in our projections. By our estimates, Renaissance Oil’s block will be generating 30,000 barrels of oil equivalent/day in a few years. At a $27/boe margin, that works out to $300 million in profits, with half going to Renaissance. Putting a multiple of 10 times on it, would impute a value of $1.5 billion to Renaissance; which in turn works out to $3 a share fully diluted.

Clearly, Renaissance has the potential to move further up the foodchain; to become a big player in the O&G arena over the next few years.

Those who know the O&G sector understand that drilling is a capital intensive game:

These debentures have a term of five years, maturing on March 6, 2024, and bear interest at a rate of 8% per annum (cash), or 10% per annum (common shares of the company). Cash or shares – it’s the company’s option.

The debentures are convertible into ROE common at a price of C$0.25 per share at a ratio of 4,000 shares per C$1,000 principal amount. This one is at the holder’s option.

The net proceeds of the Offering will be used to aid in the Company’s ongoing efforts in securing oil and gas rights in Mexico, to fund capital expenditures and for general corporate purposes.

Elsewhere in the company’s Mexican project portfolio, and not to be dismissed, the Chiapas Blocks: 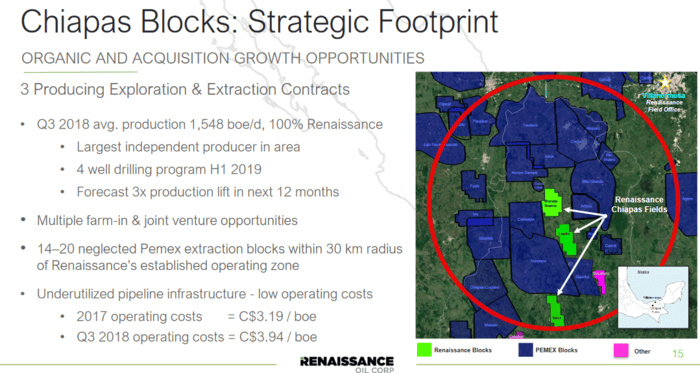 Renaissance won the three Chiapas blocks by very small differentials of less than 2.5% above each of the second place bid values. Well-attended auction processes saw over 40 companies vying to be the first onshore operators in Mexico’s historic privatization of the energy sector.

Damn, less than a 2.5% differential with 40 bidders all wanting in on the same projects. Nice shootin there Tex. Seriously, nice shottin!

With 278.26 million shares outstanding, Renaissance has a current market cap of $40.35M. Based on the company’s potential to grow its production substantially over the medium term, its current share price/valuation is extremely attractive.

I’m told we’re roughly one month away from news.

Full disclosure: Renaissance Oil is an Equity Guru client. We own stock.