This is Nano One’s 3rd patent in Canada bringing the total now to 12 patents issued around the globe.

We’ve been covering NNO since Albert Einstein discovered the photoelectric effect, riding it from .32 to a March 2018 to high of $2.53, and down to the current price of $1.37. 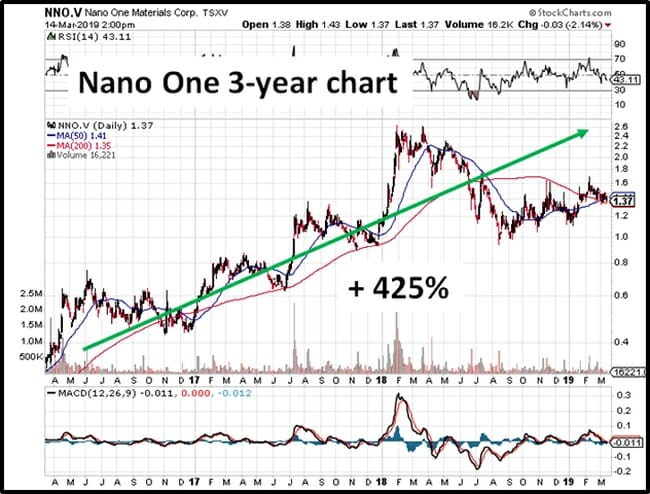 Last summer, the CEO, Dan Blondal took us on video tour of his pilot factory – explaining strategic partnerships and the goals of the company.

Recently, the subject of NNO’s patents has been dominating the news flow:

It’s true, navigating a patent website does not quickly reveal fascinating and original inventions. 99% of registered patents are incremental improvements to existing products.

For NNO shareholders, the patents protect and expand the value of the company.

On January 21, 2019, NNO announced that it has entered into a J.V. with Pulead Technology Industry – a Chinese cathode producer to “develop, evaluate and optimize scaled up production of lithium iron phosphate (LFP) cathode materials.”

China’s President Xi Jinping recently stated: “China will make efforts to streamline access to markets in the areas of investment and intellectual property.” 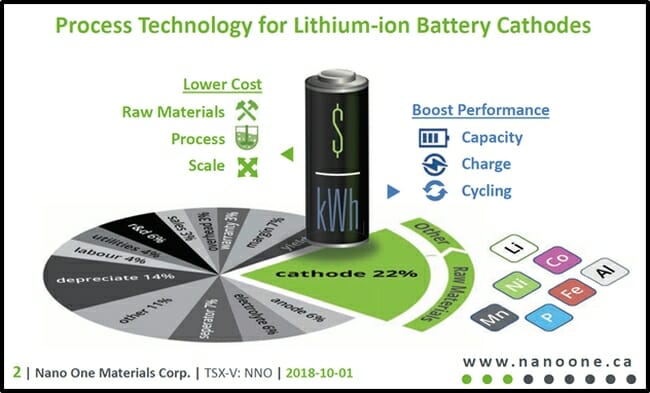 “This latest Canadian patent is significant to Nano One,” stated Campbell, “because it is related to the formation of lithium ion battery precursors by the novel process developed at Nano One.”

Precursors are intermediate mixtures of metals such as nickel, cobalt and manganese prepared in advance of high temperature processing in a furnace.

Registering domestic and international patents is a highly specialised skill.

Inventions that are defined too narrowly allow competitors to devise workarounds

Inventions that are defined too broadly can be easily challenged.

Nano One has further strengthened its patent knowledge base with the addition of Dr. Joseph T. Guy, to the NNO board.

Guy works for Emergent Law Firm which operates in the areas of corporate, employment, litigation, and intellectual property law.  Holding a PHD in chemistry, he has more than 23 years experience prosecuting patents and serving as expert witness on IP matters.

“Nano One began filing patents 5 years ago and continues to innovate,” explained Guy, “Those efforts are turning into a world-class patent estate which positions Nano One favorably as it engages with global leaders in lithium ion batteries and materials.”

Nano One continues to extend its patent coverage on a global scale, with patents now issued in Canada, United States, China, Korea, Taiwan and Japan.