The legislation permits municipalities to collect a 2% tax from cultivators and manufacturers.

At Equity Guru, we believe that legal recreational weed in the U.S. is coming to all states soon because (like women’s-right-to-vote and gay marriage) – the arguments against it are too flimsy to remain upright. 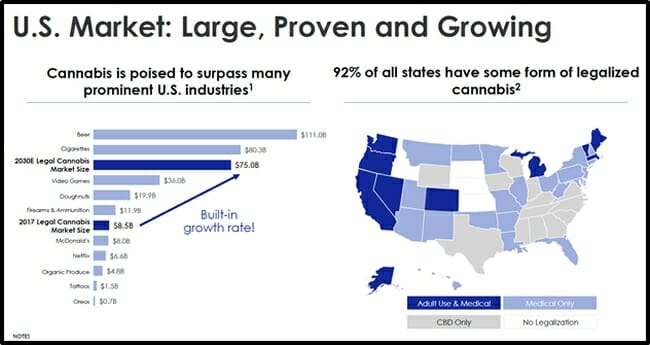 Cannabis has a downside (lethargy, coughing, over-eating) – but compared to the devastation caused by alcohol, weed is coconut water.

The Mayo Clinic reports that alcohol is a factor in the deaths of 4,358 young people under age 21 each year, “include 245 deaths annually from alcohol poisoning, falls, burns, and drowning”.

Investing in iAnthus Capital Holdings (IAN.C) is a bet on the future of legal pot in states like New Jersey.

Three months ago iAnthus and MPX Bioceutical (MPX.C) announced a deal whereby iAnthus will acquire all of MPX shares in an all-stock transaction valued at $835 million.

iAnthus scooped up the MPX U.S. operations – which instantly expands business activities to 56 retail locations and 14 cultivation/processing facilities in 10 U.S., creating “super-regional footprints in both the eastern and western United States.”

On December 17, 2018, The New Jersey Department of Health announced that MPX New Jersey was one of six businesses and organizations awarded new licenses to cultivate and dispense medical marijuana. 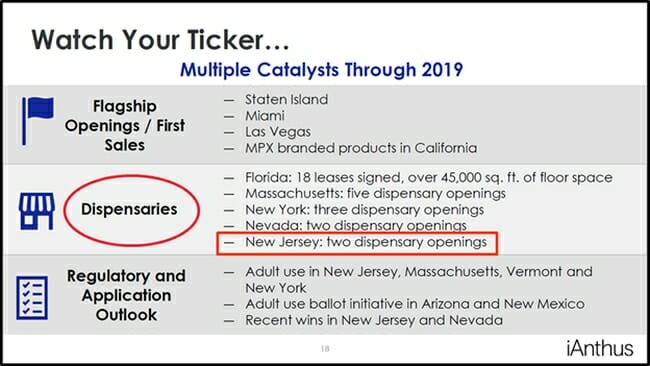 “I’m thrilled to announce an agreement with my partners in the Legislature on the broad outlines of adult-use marijuana legislation,” stated Murphy, “Legalizing adult-use marijuana is a monumental step to reducing disparities in our criminal justice system,”.

Murphy’s point, about “disparities in the criminal justice system” is another argument in favour of adult-use legalisation in New Jersey.

The American Civil Liberties Union report The War on Marijuana In Black and White concluded that “a black person is 3.73 times more likely to be arrested for marijuana possession than a white person, even though blacks and whites use marijuana at similar rates.”

iAnthus/MPX will cultivate marijuana in Galloway Township and dispense in Atlantic City.

“We are pleased to announce that New Jersey Department of Health has approved MPX New Jersey LLC application,” stated Beth Stavola, Chief Strategy Officer at iAnthus, “We are excited to expand access to the state’s medical marijuana program to the patients who need it.”

iAnthus/MPX beat out 140 other companies to get the New Jersey go-ahead.

“Because your application was selected, you may proceed with the ATC permitting process consistent with the requirements set forth in the Act and the Medical Marijuana Program rules found at N.J.A.C. 8:64-1.1.” the NJ government told MPX.

The New Jersey bill still has to be passed and signed into law.  When that happens, the new market will be governed by a Cannabis Regulatory Commission, led by five members appointed by the governor.

Growing cannabis also will also be be subject to an excise tax of $1.50 per gram.  Cities and townships home to a retailer will receive a 3% tax on products sold.

The bill also proposes an “expedited expungement process” for NJ residents convicted of low-level marijuana offenses, preventing these offenses being used punitively in applications for education, housing or occupational licensing.

Ten states and the District of Columbia have now legalized recreational marijuana.

Three weeks ago, IAN announced that it has opened a 2nd New York dispensary, Citiva Hudson Valley – located in the Dutchess County town of Wappingers Falls.

With the Democrats regaining control of the New York Senate and Assembly for the first time since 2010, New York is also on the cusp of legalizing marijuana.

We believe that iAnthus’ foothold in U.S. medical markets gives it a significant competitive advantage in nascent recreational markets like New Jersey.

Full Disclosure:  iAnthus is an Equity Guru marketing client, and we own the stock