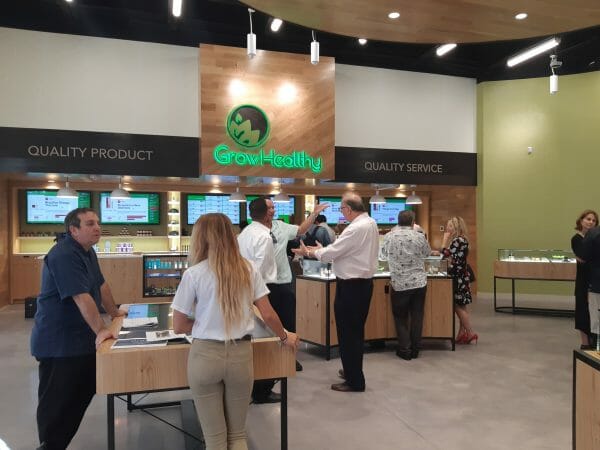 IAnthus Capital (IAN.C) is tightening its grip on the Florida dispensary market with another retail location.

The Lake Worth location, iAnthus’ third in the state, is located just an hour north of Miami and is set to open on March 7, 2019. The company aims to open 17 additional locations throughout 2019.

GrowHealthy, iAnthus’ Florida dispensary brand, will be holding a ribbon cutting ceremony at the Lake Worth location and is offering 25% discount to all first-time patients to commemorate the grand opening.

“We’re pleased to open up a GrowHealthy location in Lake Worth, which we feel has been underserved in terms of access to cannabis treatment up until this point.”

The company is also offering a 40% discount to all veterans between March 8 and March 10. Florida has one of the highest veteran populations in the country.

The Lake Worth location will offer GrowHealthy’s range of vaporizer cartridges, oral tinctures and salves. Dried flower is not yet available for purchase in Florida, though executives from LPs active within the state say they expect that to change in Q2 2019.

The future is iAnthus

IAnthus has 593,000 square feet of cultivation space and owns 63 dispensaries across 11 states. That’s a potential customer base of 121 million people. 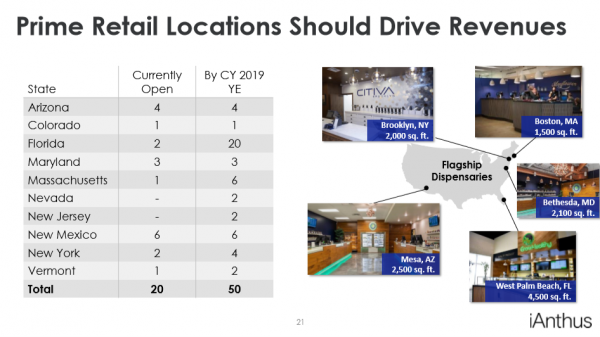 There is plenty of competition throughout Florida for iAnthus to grapple with, but the company’s storefront was the cleanest, best designed and most professional out of all the dispensaries I saw down there last month.

Curaleaf’s (CURA.C) location was a close second in terms of staff knowledgeability, but seemed like your typical head shop stocked with volcano vaporizers and merch.

On the other hand, Liberty Health Sciences (LHS.C) still dressed its employees in t-shirts emblazoned with the phrase “Powered by Aphria” on the sleeves. A spokesman for the company later said LHS has severed its ties with Aphria (APHA.T).

But GrowHealthy’s dispensary was open concept and inviting. Instead of just having chairs for patients tired of standing in line, there was a small lounge area behind lattice for customers who just wanted to hang out.

With 20 dispensaries open throughout the U.S., iAnthus is on to something. Sandwiched between a country which has already legalized cannabis and a nation whose president has made clear his intentions to do the same, it’s only a matter of time before the U.S. follows.

When the federal prohibition on American cannabis ends–and that is a matter of when–Wall Street will flood the market on a scale Canadian LPs could only dream of.

What happens then is anyone’s guess. Do the hedge funds short Canadian LPs and give multi-state operators like iAnthus all the cheap money they need? Or are everyone’s valuations going to drop? Anyone who tells you they know has a bridge to sell you.

But the U.S. has 10 times Canada’s population and far more ideal growing conditions. Humboldt county and the Emerald Triangle have been producing world-class cannabis for decades without the need for greenhouses.

I’m keeping my eye on the U.S. Small government and deregulation means businesses can do what they’re supposed to: make money. They know how to do it right down there.