The reduction in cost was attributed to lower absolute expenses and efficient production growth at Jericho’s STACK assets.

Focused on its Anadarko basin STACK play in Oklahoma, Jericho plans to maintain a low debt-equity ratio in 2019, freeing up capital with a prudent hedging program.

Said capital will be allocated based on strategic and rate-of-return metrics, prioritizing Jericho’s high-return STACK asset and possible acquisition opportunities near the company’s 16,000 net acres in the Anadarko basin.

Jericho holds a total of 55,000 acres in Oklahoma, but the company’s current operations center on the low-cost oil-prone Meramec and Osage formations in the STACK.

What is STACK anyway?

Oklahoma is made up of a series of oil-abundant areas, including the Tonkawa, Granite Wash, SCOOP and STACK trends.

The STACK delineation is different from other oil plays like Eagle Ford, in that it is a geographic region rather than geological district.

Within STACK there are at least four distinct geological formations known as the Meramec, Osage, Oswego and Woodford formations.

STACK sits in the Anadarko basin which, in 2010, the U.S. Geological Survey estimated to hold 495 million barrels of oil.

Major producers like ExxonMobil (XOM.NYSE), Chesapeake Energy (CHK.NYSE) and Sandridge Energy (SD.NYSE) are pouring money into the region with much of their holdings in and around Jericho’s largely held-by-production STACK acreage position.

Jericho’s track record of participating in multiple producing STACK wells has given management confidence in the underlying value of its investment in Oklahoma.

Oil exploration isn’t cheap. In fact, according to a 2015 well cost study conducted by Petroleum Services Association of Canada (PSAC), a oil well near Burmis, Alberta was estimated to cost $14,684,765 from first permit to completion.

In our current economic squeeze, upstream players like Jericho are not only vying for the best properties with oil-prone geologies, but they are also fighting for credit from the public markets.

Jericho, and other juniors like it, typically have insufficient operational income to fund the development of new oil and gas exploration projects.

These companies must turn to debt and equity financing to put drills in the ground.

The 2009 recession made financing even harder as more and more industry players plead with the markets for much-needed exploration cash.

As a result, oil and gas executives are forced to find innovative methods of securing capital or search out strategic joint venture deals to spread out the pain.

Jericho has done just that, but it goes one better by finding distressed developed production assets in a prolific region popping with major players. 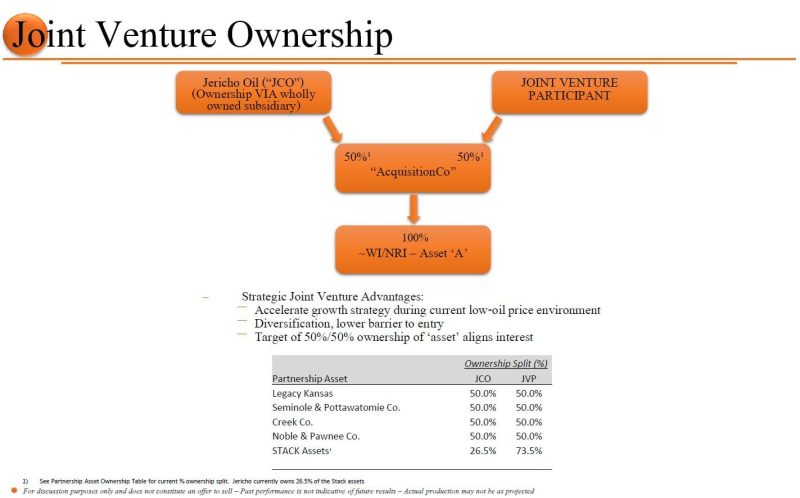 The company developed its STACK land package on the cheap for an average of $2,300 per acre and now properties in that area are fetching $15,000 per.

All this acquired property has been drilled and management is confident that significant oil resources are just waiting to be extracted.

Where to from here?

Last year’s increased production sets the stage for Jericho’s journey over the next 12 months.

“While we are pleased with our 2018 results, we were just starting to see our patience be rewarded as we began to drill our STACK asset, return existing shut-in wells to production and move to develop some of our other high potential assets when oil prices turned down 40% in the end of 2018. We are hopeful that oil prices will continue their upward trend and provide us the opportunity to expand upon 2018’s success.”

In addition to Jericho’s steady base of low-decline production, its STACK JV has an interest in four currently producing Osage and Meramec formation wells.

The coming year will see a small shift in management responsibilities as Jericho CEO, Brian Williamson will take on the additional role of president while Ben Holman, company CFO, will assume the added duties of secretary as of March 1, 2019.

The aforementioned positions were formally held by Jericho founder, Allen Wilson, who will continue on as director, consultant and shareholder.

Equity.Guru’s own Chris Parry spoke with Brian Williamson in our continuing series of EG podcasts to discuss the company’s STACK assets, the state of oil and what investors can look forward to in 2019.

Even with the depressed state of the oil market Jericho management feels it can build a sustainable production platform (see below).

The last three years have been building to this point and if Jericho can continue to optimize costs, it may just grow into a major upstream participant in Oklahoma’s historic STACK play.

Shares in Jericho eased up slightly to $0.40 per share by afternoon trading.