This week, MedMen (MMEN.C) attempted to shine a light on a wall to distract folks from their ongoing lawsuits and revelations of free spending, bonus-enriched execs, by revealing a flashy new commercial/short film, directed by award winning movie auteur Spike Jonze, about the history of cannabis.

It’s pretty nice. I mean, hell, you get what you pay for and, boy howdy, is MedMen paying for it.

Here’s the problem: In spending massive dough to put this ad on national movie screens, TV, cable, online, and even a version in national print magazine outlets across the United States, MedMen is largely marketing to people who can’t buy anything off them. 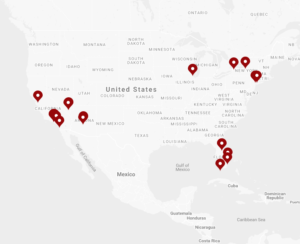 MedMen, as things stand, does business in six US states. That means about 90% of their national ad spend is delivering a message to states in which potential customers can’t find a store.

And today MedMen revealed, in their latest quarterly financials, that they lose a lot of money in doing that business.

As one might expect from this outfit, MedMen buried the lede: 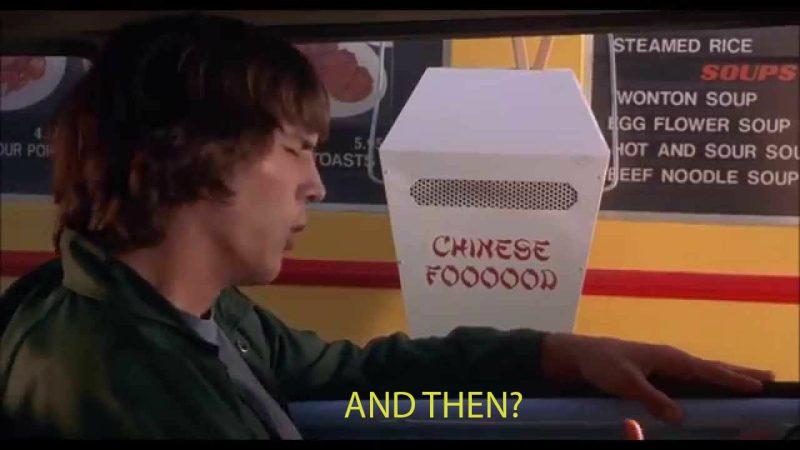 Closed a $77 million senior secured term loan with funds managed by Hankey Capital and with an affiliate of Stable Road Capital. 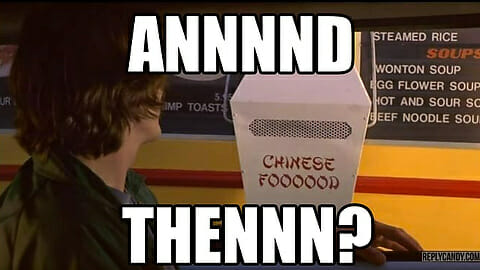 Right at the bottom of their news release, just above ‘additional information, comes the kicker:

“But they’re growing like crazy!”, bagholders will say. That marketing campaign will benefit them as they open in every state!”

Only, that’s not the plan. From today’s news release:

Clearly what’s needed here isn’t a national marketing campaign but, rather, an ad in the Miami Penny Saver.

Meanwhile, the folks over at iAnthus (IAN.C) have just completed their acquisition of MPX Bioceutical, which makes them, well, MedMen but bigger, and without the nutty corporate bonuses and pointless marketing spend.

The combined company (iAnthus and MPX), now has operations in 11 states that will permit iAnthus to operate 63 retail locations and 15 cultivation/processing facilities.

Now, iAnthus has had to deal with issues recently too.

Things are going well, but due to the weirdness inherent in combining ticker symbols, some investors have yet to receive their share certs for the combined IAN/MPXI vehicle, with ongoing delays understandably frustrating shareholders.

We spoke to the company today and went into the situation in some detail.

Here’s what investors need to know: Patience is a virtue.

The new IAN Vice President of Investor Relations, Megan Kulik, is on it, and has been dealing with a lot of concerned shareholder calls – but the situation is largely out of IAN’s hands.

The iAnthus shares were transferred by our transfer agent (Computershare) and received by MPX’s transfer agent (CDS) on February 11, 2019, who in turn, have allocated the shares accordingly (including to DTC).

It’s the job of the Depository Trust and Clearing Corporation (DTC), a member of the US Financial Reserve, to allocate shares to the brokers when a combination like this has occurred, but this process hasn’t been speedy, and is ongoing.

We have been in active and ongoing contact with the various clearing houses and brokers to try to finalize the settlement as quickly as possible. It is our understanding that the delay in settlement is due to the delay in MPXI being determined DTC eligible.

Sine the delay is on processing the MPXI end, you might think IAN shareholders would be fine in the meantime, but the DTC is waiting to settle both iAnthus and MPXI shares jointly once they’ve made their determination.

Some trading houses have moved forward and dealt shares accordingly. Some have not done so yet. And while that has caused confusion among some investors, and fueled the occasional conspiracy theory on the internet’s backwaters, what we’re looking at here is one of the many ways the North American financial markets run a lot less functionally than you’d expect.

Kulik says iAnthus is not sitting back and waiting on all of this to just organically fix itself. They’re hoping everything is sorted in days, but if there are further delays:

We are working with the DTC to get them to settle the iAnthus shares independent of the MPXI shares should this determination be delayed any further.  This should occur by the end of this week.

Meanwhile, over at MedMen, after being accused in court proceedings of spending money on frivolous items that benefited execs for not good reason, the company has now elected to remove its G&A disclosure entirely from its financials. The previous financials broke down the individual line items. The latest financials don’t.

Jesus fucking Christ, the balls on these guys…

We’ve been consulting with, and been big fans of, iAnthus for some time now and have reveled in their tendency to not only play by the rules, but achieve milestones with monotonous regularity. Eleven states is evidence of that. 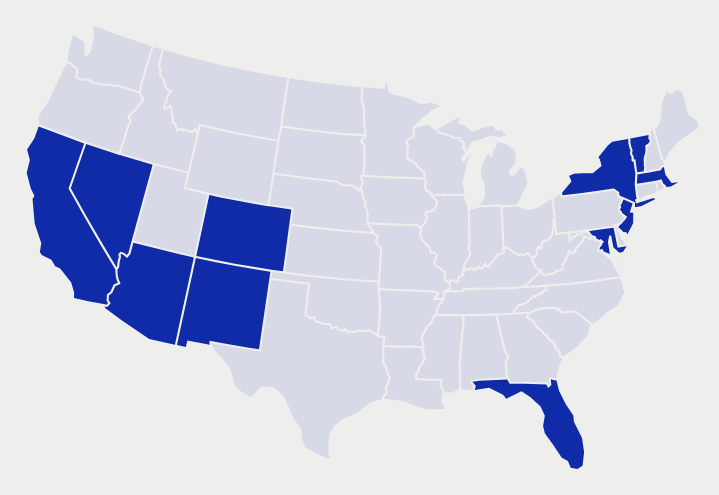 They’re the grown ups in every room, and doing exactly what you’d hope they would in building their business responsibly AND quickly.

To that, the only reason to fret about not getting your certs quickly would be if you want to sell the stock quickly. Frankly, with the share price moving from $4.80 to $7.60 over the last two months, any delay experienced in getting to a sell date has benefited shareholders in a most fortunate way.

In the time IAN has been climbing happily, MMEN has been static. 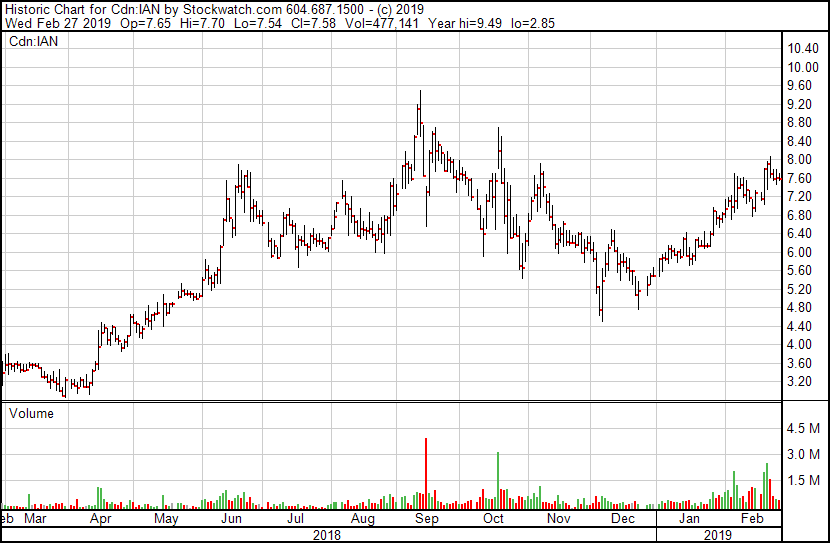 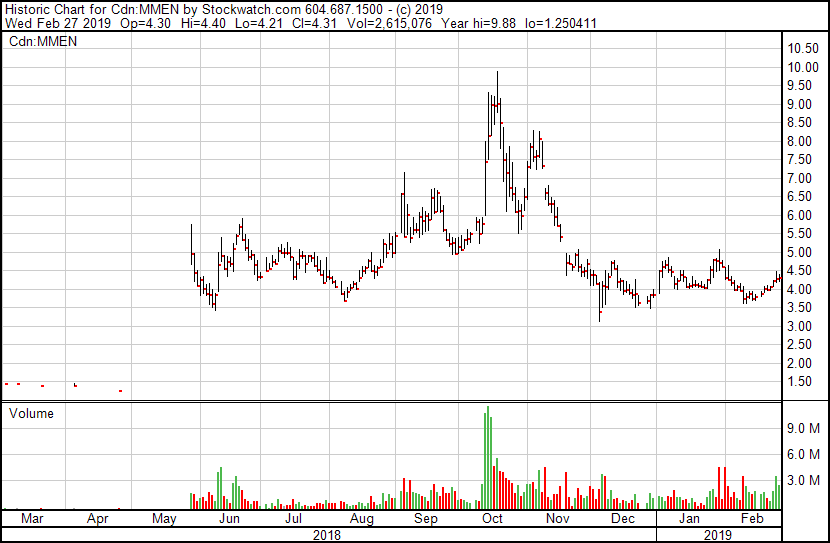 FULL DISCLOSURE: iAnthus is an Equity.Guru marketing client, and the author owns stock in the company. MedMen once threatened to sue us for half a billion dollars because they didn’t like how we talked about their executive bonus structure. So, you know, there’s a perceived conflict of interest. Do your own math and make your own mind up.