Plus Products (PLUS.C) gets serious about safety as sales numbers soar

On February 26, 2019, Plus Products (PLUS.C) – a California-based cannabis-infused edibles producer – announced that it has begun to roll out child-resistant (CR) tins across the state – getting a jump on the January 2020 imposed California deadline.

Against all odds, PLUS has become a dominant brand in California’s monster weed market. As the early sales numbers are published, the 2019 stock price has increased 100%. 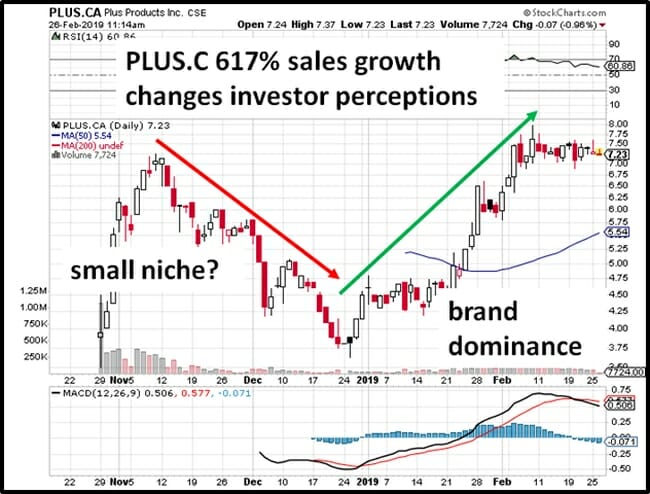 Before we drill down into PLUS – let’s look at how child-resistant tins became a topical issue.

Since California legalisation – state officials have reported a sharp increase in incidences of “cannabis poisoning” amongst children.

In the first six months of 2018, there were 386 calls to poison control centers involving marijuana exposure by underage people.

Nearly half of the calls received last year — 256 — involved children 5 and younger, including 38 children under 12 months old, and 64 toddlers who were a year old, according to Stuart E. Heard, executive director of the California Poison Control System. 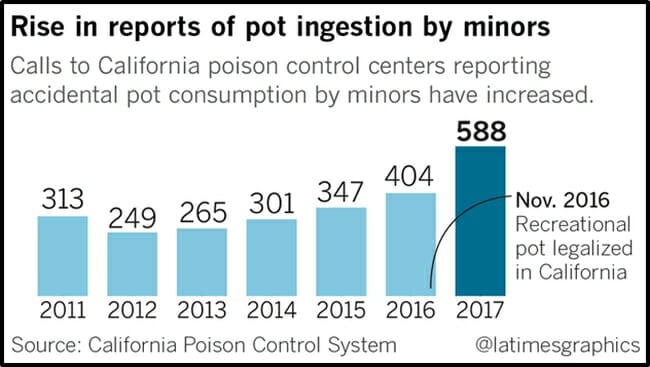 “Cannabis-laced gummy snacks sold by a student at a middle school in Chula Vista made some of his classmates sick,” stated the LA Times.

This is a real problem that needs to be faced head on. Discovering junior in his highchair, OD’d on THC gummies would be frightening for any parent.  Although, to put the cannabis problem in a wider context, The Mayo Clinic reports that alcohol is a factor in the deaths of 4,358 young people under age 21 each year, “include 245 deaths annually from alcohol poisoning, falls, burns, and drowning”.

In response to incidences of “youth cannabis poisoning” the California Department of Public Health, is instituting some changes

“The convenience of our packaging is an important part of what has made PLUS successful,” stated Jake Heimark, CEO, “We are proud that we were able to keep the best elements of that experience while bringing to market a new tin that is child resistant, convenient, and still completely recyclable.

Heimark is one of the adults in the U.S. cannabis space.

The BNN video below gives a good overview of the PLUS business philosophy.

“We think there is an opportunity for the entire cannabis industry to bring us from where we are today, to be a more mature, responsible and adult industry,” stated Heimark at min. 3:45 in the BNN video report, “If you look at the alcohol industry, they put a lot of time and effort to make sure that drunk driving wasn’t something that people wanted to do.  PLUS wants to be a leader – helping others to understand the benefits – but also some of the potential downsides of cannabis.

On February 1, 2019 PLUS announced that it extended its lead in the California edibles market with its diverse line of CBD and THC infused gummy delights.

According to BDS Analytics retail sales data, during Q4 2018, PLUS again secured its position as the #1 best-selling cannabis-infused edibles brand in California and saw its lead over the #2 brand widen over the prior quarter.

PLUS also had 3 of the best-selling branded products in all product categories including flower, vaporizers, edibles and topicals during Q4.

BDS Analytics also noted that PLUS “CBD Relief” was the top CBD-only SKU.

“We believe the top cannabis brands have a responsibility to lead the industry in a safe direction,” stated Heimark, “We searched the globe for the best child resistant packaging and found it in these tins.”

“The tins we are launching this week are an elegant solution to a difficult problem, and are an important step in PLUS continuing to make cannabis safe and approachable.”

The new tins are made of recyclable tinplate steel with a polypropylene insert and are certified according to the Code of Federal Regulations.  The tins are opened with a press and twist method, similar to a prescription medicine bottle. The first tins are already available at select outlets in California.

Full Disclosure:  Plus Products is an Equity Guru marketing client and we own the stock.