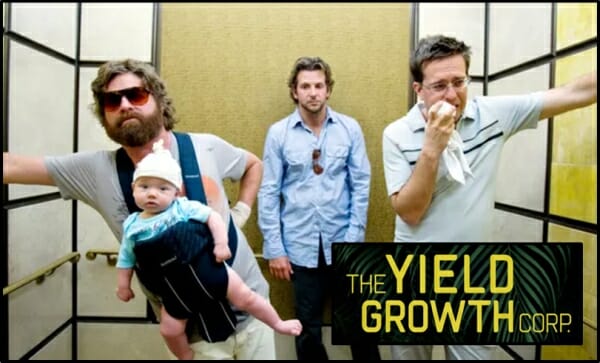 The formulas are aimed at various health outcomes, including boosting energy and brain function, reducing anxiety, inflammation and a hangover treatment.

On December 21, 2018 we began our BOSS coverage stating that “Yield Growth’s CEO, Penny Green has developed a portfolio of cannabis-based “wellness formulas” – under the Urban Juve brand.”

The market gets the “cannabis wellness formula” opportunity, and respects the disciplined rollout of BOSS’s product line. 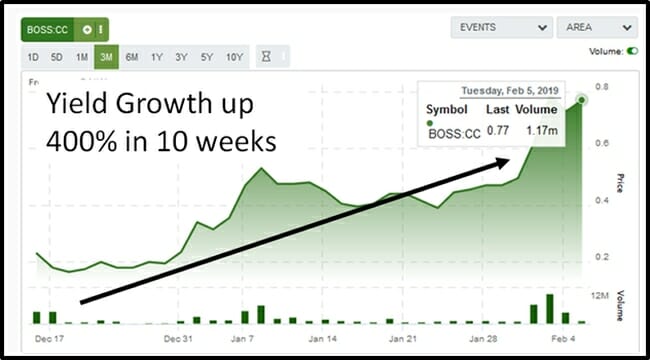 The notion of a CBD/THC hangover cure is tantalising.

In 2016, an acquaintance of mine was stopped in a police road block.  A breathalyser test determined that he was legally drunk.  It was his 3rd impaired charge.  His driving licence was suspended for a year.

I ran into him last summer while he was waiting for a bus. I assumed his licence was suspended again, but that wasn’t the case.  He had elected not to renew it.

“I realised that I have to give up drinking or driving,” he said, “Humans have been drinking for 4,000 years, and only driving for 70 years, so it was a pretty easy decision: I quit driving.”

Other recreational drugs come and go (LSD, mushrooms, whippets, cocaine, ecstasy, MDA etc.) but booze has stood the test of time – and any company that can successfully market a cure to its unpleasant aftershock (the hangover) is going make boat loads of money.

Throughout history, there have been many attempts to crack this nut:

Ancient Syrians used to grind up the beaks of birds.  The Mongols believed in pickled sheep’s eyes. In 17th Century England, they stuffed nasal passages with the juice of tree ivy.  In the American Wild West hungover cowboys would drink tea made from rabbit dung.

Recently, a galaxy of “science-inclined hangover solutions” have come out of Silicon Valley.

But none of them have gained medical credibility or significant market share.

“There is no magic bullet that does everything for everyone,” states Dr. Chris Alford, a hangover researcher at the University of the West of England, Bristol, “You have to fish around to see which ones are going to work best for you.”

BOSS’s formulations were developed in India and are based on Ayurvedic medicine using botanicals, fruit extracts and spices.

“We are excited to move forward with the development of our CBD and THC infused beverages as these products are expected to be fully legal in Canada within the year,” stated Penny Green, Yield Growth President and CEO.

Yield Growth is currently talking to cannabis growers, processors and hemp farmers to source CBD and THC for its products.

Equity Guru’s Chris Parry, sat down recently with Yield Growth CEO, Penny Green – who spoke about the company, its progress, its pending extraction patents and what investors can expect in 2019.

Ms. Green is a talented communicator, and the podcast shines light on numerous intriguing subplots, including (minute 14), that the IPO was driven by female stock brokers.

“The Yield Growth Corporation is a potential acquisition target for larger companies,” stated MarijuanaStox, “including Estee Lauder, and Procter & Gamble.”

The global liquor industry is expected to top $1.5 trillion globally by 2022.

That’s a lot of booze.

That’s a lot of hangovers.

To complete the beverage formula and hangover capsule acquisition, Yield Growth issued 200,000 shares and 200,000 warrants to purchase shares at $0.60 per share for the acquisition.  BOSS is also obligated to pay net revenues from sales of 2%.

FULL DISCLOSURE: Yield Growth is an Equity Guru marketing client, and we own the stock.