The technique is as old as the wind.

When a company has bad news, it waits until the stock markets have closed on Friday – then publishes the news – hoping that by Monday morning, all will be forgotten.

In political circles, the practice is sometimes combined with other distractive techniques, like waiting until a hurricane blows in to announce the pardoning of a racist Sherriff.

No strong winds buffeted Bay Street this weekend, but we were given another shining example of the wriggly-piggly nature of MedMen (MMEN.C) executives.

The Friday evening release states that MedMen Opportunity Fund II, has disposed of ≈ 55.7 million Class B Common Shares of MM Can USA – a subsidiary of MedMen Enterprises.

The Class B Shares may be redeemed from time to time by the holders thereof for cash or an equivalent number of Class B Subordinate Voting Shares.

We’ll break it down for you.

First – full disclosure: we have a sour history with MedMen.

On May 28, 2018, we pointed out “MedMen (MMEN.C) goes public Tuesday, but three executives will make most of the money on the deal.”

“The CEO and the Chairman will each receive US$1.5 million per year in salary for four years,” wrote Equity Guru principal Chris Parry, “plus US$10 million in ‘redeemable units’ based on share price, that have vested, plus another $30 million in long term incentive plan units that vest over 24 months, at the end of every month.  This deal is a fucking embarrassment.”

After some soul searching, the MMEN executives agreed to tie their compensation package (loosely) to stock price performance.

On July 18, 2018 we published an article, “As MedMen (MMEN.C) CEO buys new home, company is taking tips away from its employees.”

“I think you guys are having issues with comprehension here,” responded Parry, “My headline clearly stated what it stated, that ‘As MedMen CEO buys new home, company is taking tips away from its employees.’ All of that was factual.”

“MedMen has been snapping up individual dispensaries whenever it can, of late, with all of those deals being cloaked in secrecy,” wrote Parry on September 12, 2018, “Frankly, we don’t know if they’re paying $10m per store or $100m, because – and this is fact – the company doesn’t consider its purchase price to be material information.”

To be clear – we haven’t shorted MedMen – and there is no company-wide directive to criticize them. 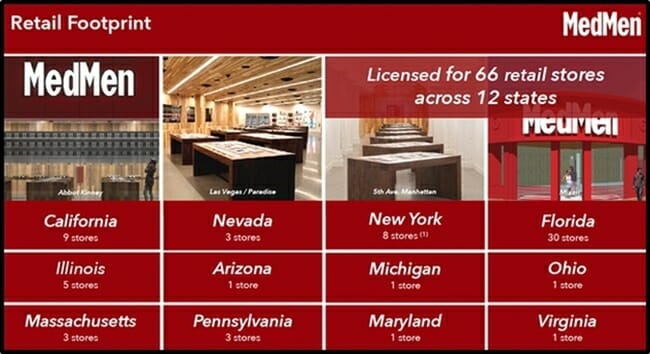 That’s not an annual loss, that’s for one quarter.

During regular store hours, MedMen is losing $1,000 a minute.

On p. 57 of the Q1, 2019 consolidated statements, it mentions in passing that “Key Management Compensation” for the quarter is $21 million.

Imagine if you cut me a cheque to start a business, I lost $66 million of your money in three months – and still paid myself $21 million?

MedMen executives have been micro-dosing human feces into the news-flow for so long, with such guile, that MMEN shareholders are now fully acclimatised to the taste of shit.

Which brings us back to the January 25, 2019 Friday evening news dump.

There are now 57 million new shares floating around – that couldn’t be traded yesterday – but can be traded now.  What that does to MMEN’s short-term share price depends on whether the shareholders plan to sell.

Who owns these 57 million shares?

That information is contained in a January 8, 2019 lawsuit by “two early investors in MMMG”, Omar Mangalji and Brent Cox who filed a complaint in Los Angeles Superior Court alleging unfair treatment regarding the disposition of their investment.

Cox is a veteran financier, while “the rakishly handsome Mr. Mangalji (33) is the only son of hotel tycoon Majid Mangalji,” stated a L.A. celebrity gossip blog.

“The plaintiffs alleged that they are being unfairly prevented from cashing out of their interest in MMMG, which currently holds approximately 179 million shares,” stated the press release, “The shares are locked up, thus prevented from trading in the open markets, until November 25, 2019.”

“These are frivolous claims,” responded Daniel Yi, MedMen’s VP of communications, “Omar Mangalji and Brent Cox, now seek special treatment. We feel confident we will prevail against this meritless complaint.”

“We have a long history with MedMen – as one of the largest and original shareholders stated Cox, “Sadly, we are backed into a corner here and compelled to take action.”

“Cannabis industry retail giant MedMen Enterprises and its top executives face a $19.8 million lawsuit by an early investor group who charge that senior execs enriched themselves at the expense of shareholders and breached their fiduciary duties,” confirmed mjbizdaily.

“Beneath the MedMen veneer is a complex web of interconnected subsidiary entities, virtually all of which are directly managed, directed, controlled and owned by Bierman and Modlin,” the suit charges.

We suspect the disposition of ≈ 55.7 million Class B Common Shares is a deal struck in a back room to make the $19.8 million lawsuit go away.

In an ideal world, that would’ve been explained to the shareholders on Monday morning.

But the squalid history of this company – combined with the timing of the release – suggests that it was done to benefit the MMEN management – not retail shareholders.