On January 25, 2019 The Green Organic Dutchman (TGOD.T) announced that it has signed a deal with Knud Jepsen to establish two 50/50 joint ventures:

Knud Jepsen is a horticulture company.

You know – they grow stuff.

In fact, Knud Jepsen is the world’s largest Kalanchoes breeder, distributing and selling more than 35 million plants in Europe and 90 million cuttings a year to over 75 countries.

To put that in perspective, Knud Jepson could hand-deliver a Kalanchoes-cutting to every living person in Denmark, Belgium, Croatia, Finland, Greece, Portugal and Serbia – and still have enough left over to give a cutting to every Canadian resident.

Kalanchoes are not the go-to plants for weddings receptions or Valentine’s day, but you do know these plants.

Kalanchoes are cultivated as ornamental houseplants. They are popular because they have extremely low water requirements, and come in a dazzling variety of flower colors.

Knud Jepsen has made significant horticultural innovations, like developing high ethylene resistance plants. That’s a big deal because Ethylene is a natural gas released from ripening fruits and vegetables, exhaust gas and cigarettes – and it makes plants wilt.

Founded in 1939, Knud Jepsen has 80 years of experience in all areas of horticulture ranging from genetics and breeding to international partnerships and developing global distribution networks.

Knud Jepsen and TGOD will form both JVs in Denmark with a goal to expand the Production JV into future low-cost European jurisdictions.

According to this agreement TGOD will have the exclusive right to all cannabis-related production from the JV, through a guaranteed off-take agreement at a pre-determined price relative to the production cost of the JV.

The Production JV will have exclusive access to all intellectual property including elite cannabis genetics developed within the Genetics JV.

Knud Jepsen will run the day-to-day operations of the JV and TGOD will “leverage Knud Jepsen’s years of horticulture experience and science and R&D division to accelerate commercial operations in Denmark and throughout Europe.”

“We are thrilled to officially enter the cannabis market with the signing of this definitive agreement with TGOD,” stated Frands Jepsen, Knud Jepsen’s CEO. “We will shift to strategic European locations with low-cost production.”

“This JV is incredibly important to furthering TGOD’s presence in Europe,” stated Brian Athaide, Director and CEO of TGOD. “Knud Jepsen is a remarkable partner, having over 80 years of experience in R&D and cultivating plants in millions of square feet. We will leverage Knud Jepsen’s expertise as operators, and our expertise in cannabis. 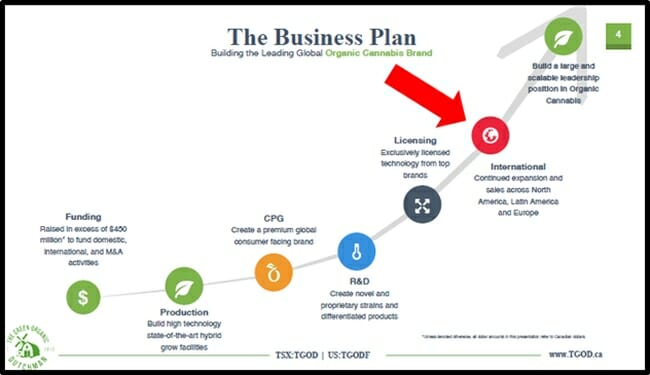 Qq  The press release contemplates a significant investment in the development of the pharmaceutical hemp and cannabis sector within Greece and highlights an up to $74 million-euro investment, 34-acre property in Thebes, and a multi-phased large-scale state-of-the-art cannabis cultivation facility. qq

While TGOD “cannot comment on the specifics of its application”, it does plan to construct and commission a multi-phased facility, subject to Licensing from The Greek Government.”

Athaide states that the JV partnership with Knud Jepsen will “allow TGOD to focus on building global sales and distribution channels, developing proprietary and patentable IP, and furthering brand equity.”