IAnthus (IAN.C) and Patriot One (PAT.V) in top 10 OTCQX performers

Back in the day, Over-the-Counter (OTC) stocks (“pink sheets) were to regulated markets – what Harvey Weinstein is now to gender relations.

In the 1970s, mafia operative Lorenzo Formato, testified to the U.S. congress that “organized crime has their hand on the shoulder of someone inside any OTC brokerage that’s making money.”

Prior to the internet, the only way to trade OTC stocks was to pick up the phone, and move your finger in a series of clock-wise movements.

OTCQX listed companies report to a U.S. regulator such as the Securities and Exchange Committee (SEC).

Meet one of the following Reporting Standards:

Two Equity Guru clients, iAnthus Capital (IAN.C) and Patriot One (PAT.V) have just been named to the 2019 OTCQX Best 50, a ranking of top performing companies traded on the OTCQX Best Market last year.

IAN is a U.S.-focused cannabis business that generates solid cash flow. The company recently announced a deal to “combine with MPX” – a vertically integrated cannabis company with extensive medicinal networks in five states.

With operations in Arizona, Maryland, Nevada, California and Massachusetts, New York, Florida, Massachusetts, Vermont, Colorado, and New Mexico – iAnthus has formed a “super-regional footprint” in both the eastern and western United States.

With an Amnesty International Report calling “gun violence in the United States a human rights crisis” – and about 40,000 Americans shot dead every year, the success of PAT’s hardware has mortal implications.

The 2019 OTCQX Best 50 is a ranking of top performing companies based on 2018 total return and average daily dollar volume growth.

Total return = capital gains, dividends and distributions realized over a given period of time.

Dollar volume = stock price X share volume. A stock that trades at $1 – an average of 10,000 shares a day has daily dollar volume of $10,000.  When the average dollar volume is growing, the stock is become more liquid, which attracts institutional investors (hedge funds, ETFs, pension funds etc.) 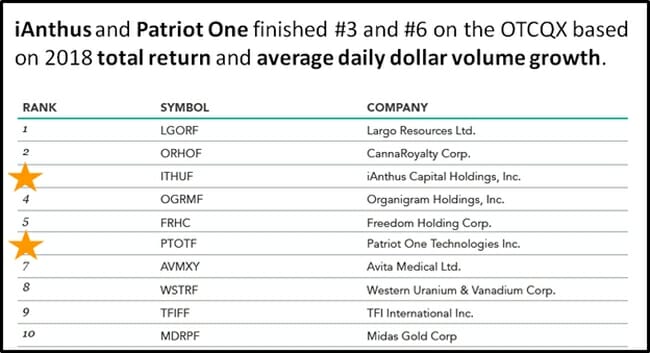 The reason large and prestigious companies list on the OTCQX rather than on major exchanges, such as the NYSE is to avoid the high initial costs – and on-going expenses in maintaining their listings.

The application fee for international and U.S. companies that meet the OTCQX requirements is much smaller than the NYSE or NASDAQ.

“It’s an honor to be recognized by OTC Markets as the third best performing stock traded on the OTCQX Best Market in 2018,” stated Julius Kalcevich, CFO at iAnthus. “As investors pay closer attention to the cannabis industry, it becomes increasingly clear that iAnthus isn’t just another cannabis stock. We look forward to an even stronger performance in 2019.”

“We were thrilled to have ranked 6th on the 2019 OTCQX Best 50,” stated Martin Cronin, President and CEO of Patriot One Technologies.  “We plan to continue an upward climb in the OTCQX, as we move from paid trials to commercial rollout of our PATSCAN solutions in 2019.”

Life is a wave motion of triumphs and defeats.

Five years ago, movie mogul Harvey Weinstein was the most powerful man in Hollywood.  He’s currently in danger of going to jail.

The formerly slimy OTC market is now hosting prestigious parties. Tonight, iAnthus and Patriot One are among the guests of honour.

Full Disclosure:  iAnthus and Patriot One are Equity Guru marketing clients, and we own stock in both companies.