TransCanna Holdings (TCAN.C), a Canada-based firm which provides transportation and distribution services to a variety of industries including cannabis, made its debut on the CSE on Jan. 9, 2018.

TransCanna’s IPO closed to the tune of 4.4 million units at CAD$0.50 per unit for total gross proceeds of $2.2 million.

Net proceeds of TransCanna’s IPO will be used for:

Currently focused on the California market, TransCanna runs lean with a total employee count of 19 contractors, six in British Columbia and 13 in California. As such, it anticipates a general and administrative expense burn rate of approximately $70,000 per month or $210,000 per quarter.

The legal cannabis industry in California sold USD$2.7 billion worth of cannabis products via nearly 2,800 dispensaries in 2017.

As big as it is, it’s still fragmented with growers and manufacturers running around marketing products out of the trunks of their car, hobbling the very important process of branding which Equity.Guru’s own Chris Parry explains is the missing piece in many marijuana plays.

Also, transportation and distribution of cannabis in California is a regulatory nightmare. This challenge is compounded by a limited pool of licensed distributors.

TransCanna intends to provide an integrated answer to these issues through two basic business arms: 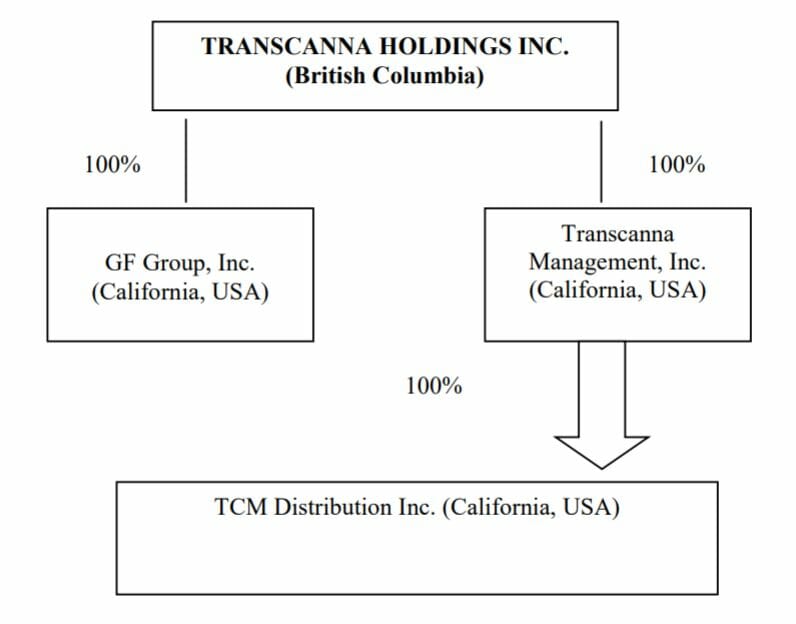 Furthermore, TCMD signed a land lease to build a 10,000 square foot transportation and distribution facility in the city of Adelanto, California, and is applying for a state cannabis distributor and transportation license.

According to TransCanna’s prospectus, TCMD has three exclusive distribution agreements with unnamed licensed operators. Of course these deals hinge on TCMD obtaining all necessary licenses and state permits.

To that end, on Nov. 15, 2017, TransCanna inked a renewable five-year, non-exclusive intellectual property license and royalty agreement with Lifestyle Delivery Systems (LDS) for its technology which complies with California’s strict Track and Trace requirements.

As of the release of the prospectus, LDS was still developing the software for TransCanna.

Until then, TCMD will continue to operate out of a 400 square foot existing facility in Adelanto at a cost of $200 per month, with the possibility of future expansion.

Long term, TCMD intends to stretch out across California with at least five distribution facilities.

If needed, GF will borrow capital from TransCanna in the form of a revolving promissory note of up to CAD$1 million to fund operations.

Now that the IPO is complete, two new consultants, experienced in cannabis sales, are expected to commence work with GF.

Who’s at the wheel?

TransCanna president, chief executive officer and director, James Pakulis, received his BA in English from Ohio State University in 1987 and has 30 years to his name as owner of, or consultant to, public and private entrepreneurial enterprises in a variety of emerging sectors.

Pakulis oversaw all mergers and acquisitions in the western United States for CliniCorp, a healthcare clinic management firm, from 1990 to 1995. Then he spent 2010 to 2012 as chairman and CEO of General Cannabis, which grew from zero to over $16 million in annual revenue in less than two years servicing the medical marijuana market in California. Interestingly, James was also president and director for LDS from November 2015 until he resigned those positions three years later.

Greg Ball is TransCanna’s CFO. Ball holds a CPA, CGA (British Columbia) designation and the 30-plus-year accounting veteran has served as CFO for such companies as Oxford Resources (OXI.V) (formally Highpointe Exploration) and Fairmont Resources (FMR.V). He has been a senior accountant with the Da Costa Management since January 2005.

Joao da Costa, another accounting and management expert, sits on the board as director. Da Costa, founder and president of Da Costa Management (founded in August 2003), has more than 30 years of experience providing management and accounting services to both private and public companies. Da Costa has acted as a CFO and/or director for multiple reporting issuers.

Backing this up is an advisory board with a combined experience of almost 80 years in branding, creative design, cannabis supply chain management, logistics and events management and sales and marketing.

TransCanna’s branding and marketing services are already in operation. TCMD’s transportation, distribution and fulfillment services are expected to become commercial with the anticipated completion of the 10,000 square foot distribution facility in Adelanto.

Adelanto is a small city in San Bernardino County, with a population of just over 32,000. Although the Adelanto license is an important step in TransCanna’s mandate, TCMD won’t be able to keep the lights on just servicing the local economy. The company will have to secure state-wide licensing in order to access a suitably-sized customer base.

GF Group may have its 23 brand portfolio, but according to TransCanna’s carve-out financial statement, GF reported a net income of $23,190 for the period ending Sept. 30, 2018 compared to a net loss of $1,914 for the year ending in December 2017. GF’s sales team definitely has their work cut for them.

Despite the perceived blue sky potential, for TransCanna to survive in today’s post-honeymoon marijuana market, it will have to handily hit its targets in the next 12 to 24 months and to do that, its going to need capital…a lot of it. That shouldn’t be a shocker, but it’s a hard reality the company is going to have to credibly sell to a worn out market.