For the last 4 years, Nexus Gold (NXS.V) has been developing three gold projects in Burkina Faso.

That appeared to be a full work load, but on November 9, 2019 Nexus announced the acquisition of a 4th Burkina Faso project – the Dakouli gold concession (198-square kilometers).

The Dakouli property is located on the Boromo-Goren Greenstone Belt and is bisected by the Sabce shear zone, a structural fault that hosts multiple gold deposits.

At first glance, the addition of Dakouli seemed like an elegant land-package consolidation – creating a more-or-less straight line of 4 assets deep in African gold country. 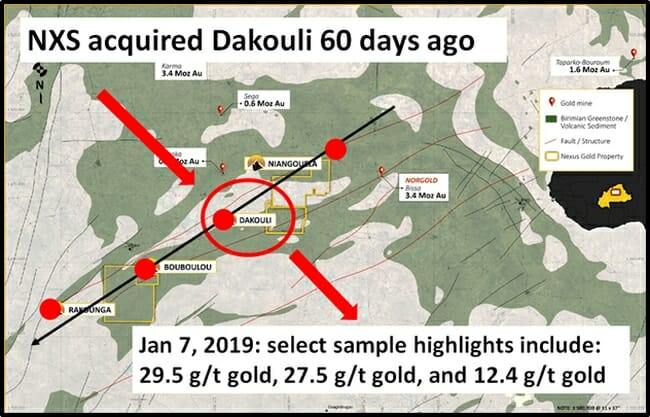 But exploring the Dakouli property on foot, the Nexus geologists discovered a cluster of artisanal gold miners (mom & pop metal diggers) – which is like finding a group of locals fly-fishing on your newly-purchased 1200-foot-deep lake.

It confirms the existence of fish.

It gives you a big hint where the fish are.

And it makes you want to drop a line down deep to see what beautiful monsters are lurking.

As a first step, Nexus took 12 samples at the Northeast Zone from artisanal shafts and pits between 8-18 meters below surface.

Two months later, the sampling results came back from the lab.

A total of 12 samples were taken from the Northeast Zone.

Six of the 12 returned significant grades, with values between 2.90 g/t Au and 29.5 g/t Au (including 27.5 g/t Au and 12.4 g/t Au) from samples containing visible gold including “coarse nuggety samples” like this: 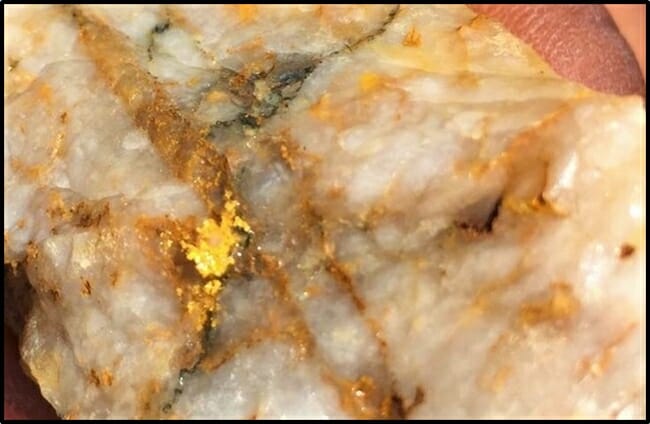 In addition to the higher-grade rock samples, “company geologists have viewed the panned concentrates of these near surface materials being processed by the artisanal miners and noted that the gold being recovered was also coarse and nuggety in nature.”

“The size of the workings and the coarse nature of the gold we have seen from the property so far makes this a very exciting prospect,” stated VP of Exploration, Warren Robb, P.Geo.

“The initial results at Dakouli are very encouraging,” confirmed Alex Klenman, Nexus President & CEO. “We have already identified multiple zones of mineralization and have recovered some significant high-grade samples.”

The addition of Dakouli increases the Nexus Gold land holdings in Burkina Faso to over 664-sq kms along proven gold belts.

But the opportunity is big.  The country has undergone less than 15 years of modern mineral exploration, remaining under-explored in comparison to neighboring Ghana and Mali; both of which host world-class gold mines in the same belts of Birimian rocks.

Endeavour Mining (EDV.T) – a $2.4 billion gold miner – is operating the Houndé and and Karma gold mines in Burkina Faso. The Karma mine is right in the same neighbourhood. 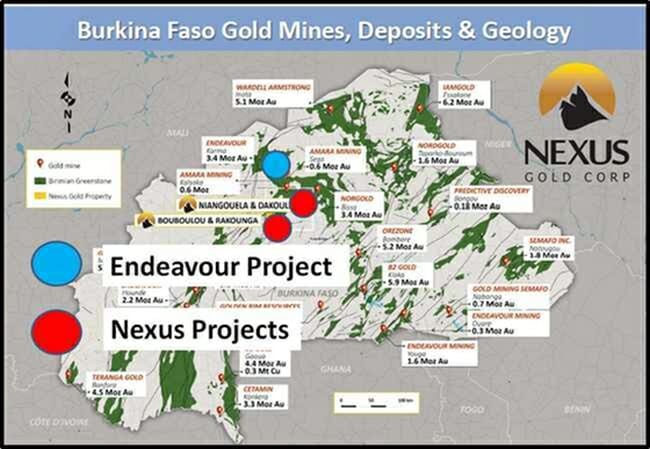 “The abundance of visible gold observed and recovered from Dakouli is certainly compelling,” stated Klenman, “We will continue to conduct ground-work and gather data as we move towards a maiden drill program in the coming months.”

FULL DISCLOSURE:  Nexus Gold is an Equity Guru marketing client, and we own the stock