I’ve not exactly been hiding my opinion that a lot of weed investments right now are overpriced market plays that, when the rubber hits the road, will struggle to do real business. The reasons for that are many, but mostly apply to really big valuations attached to what are really agri plays.

If you don’t go around looking for saffron farms to invest in, I’m not sure why you’d invest in a bog standard LP, quite frankly, unless the valuation is low, the business model unique, and the management team are corporate ninjas.

Suffice to say, most LPs are looking at other revenue streams. Invictus MD Strategies (GENE.V) came out today with news of a three-pronged US hemp deal, which is the hot ticket right now and a battleground companies like Livewell (LVWL.V) and 1933 Industries (TGIF.C) and C21 Investments (CXII.C) are already well into.

But if I’m looking for some sort of guidance on what sub-sectors might get hot in Canada when the growing side is mature, and the oils market is hemmed in by restrictions, I think California is a good place to start looking.

And in California right now, transport and security is a thing of increasing importance.

Tuesday morning, a new public company lands on the Canadian public exchanges, and it’s right in the middle of that hot ancillary market. 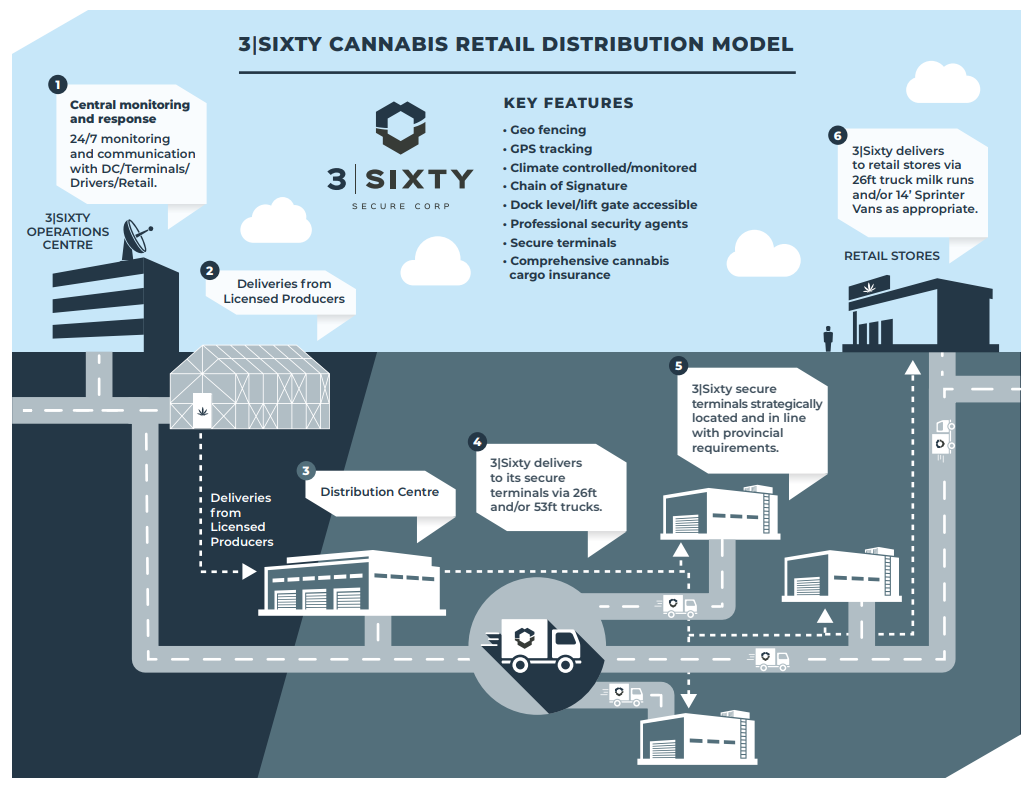 I’m going to answer your first question right before you ask it: Yes, they’re doing business.

A lot of business.

3 Sixty Risk Solutions Ltd. […] is one of Canada’s leading security service providers to the cannabis sector, transporting approximately $250 million of product every month.

That’s a lot of product, and it’s coming from a lot of different places:

3Sixty provides cannabis security consulting, guarding and secure transport security services to more than 500 customers and more than 60 licensed cannabis producers, including some of the world’s largest, such as licensed producers owned by Canopy Growth Corporation.

Worth noting, when the deal to take this company public was announced in November, they had 40 LPs on the books. Now, just a few months later, it’s 60 LPs, boys!

So this isn’t a one-contract play, not someone who got an Aphria or a Vivo to agree to a single deal and thinks they can bring together another few if they go public with enough rah-rah.

No, this is a mature, real, grey-haired group doing actual business in an area that, I think we can all agree, is getting bigger by the month. They’ve already done the work of building revenue, and earning their market share, and building out their own infrastructure.

3Sixty has a staff of over 250 employees and employs a fleet of over 60 vehicles, which management believes provides a combined security footprint to approximately 30 million square feet of patrolled area.

And it’s not cannabis-reliant. While 60 LPs is a big load of clients, the company also has clients in mining, oil and gas, non-core policing, risk assessment, and secure infrastructure consulting, and a lot of those clients are international. They deal in air transport, armored and non-armored trucks, that are temperature controlled, geo-fenced, and connected 24/7.

Hell, they were tasked with developing and implementing the security plans for the FIFA 2015 Women’s World Cup event. They’ve been working on cannabis security in Canada since 2014, and work with some of the biggest names in that biz.

Today, they provide security for Tilray’s (TLRY.NASDAQ) Highland Park, and Aphria (APH.T), as well as the province of Ontario’s provincial cannabis store, British Columbia’s Liquor Distribution Centre, and working out of operations facilities from BC to New Brunswick.

Let’s take a look at management. If you’re expecting markets guys who know more about promotion than operations, well, NOPE.

When I spoke to CEO Thomas Gerstenecker, he told me he has people around him who are market focused and have helped the company go public, but that he comes from a real security background that goes well beyond simply pulling up a truck and carrying a walkie talkie.

The Company will be led by Thomas Gerstenecker, Founder and Chief Executive Officer of 3Sixty and an international security expert with 25+ years of experience including serving as Chief of Security, Global Operations, for the United Nations and as a member of Canada’s special forces group, Joint Task Force Two.

Holy cow, that’s not experience, that’s global security elite. That’s a guy who gets into Canopy’s boardroom without a problem, and commands respect of the ops folks, and Health Canada says, ‘yes sir, of course you can send your people into that grow facility.’

That’s a guy who is taken seriously everywhere he goes. He’s not alone.

Thomas is joined on the executive team by David Hyde as President, the founder of David Hyde & Associates and a former Security Chief for a major, multi-billion-dollar corporation

Gaetan Lussier, a recipient of the Order of Canada and a Deputy Minister in the Government of Canada, will serve as Chairman of the board and will be joined by Vernon White, a Canadian Senator and former Chief of Police of the Ottawa Police Service, Igor Gimelshtein, former CFO of MedReleaf and a former Vice President at Birch Hill Equity Partners, and Nancy Croitoru, a successful entrepreneur and multi-national senior executive who also served as president and CEO of Food & Consumer Products of Canada (FCPC).

This is a lineup of bad asses.

You want to roll one of 3 Sixty’s security trucks? I’m guessing you’re not going to come up against a minimum wage rent-a-cop stuffing a honey cruller back on a fold-up chair in the back of a U-Haul.

This is the Blackwater of the cannabis world.

If you’re one who likes to invest in real management, say hi to your next buy.

If you’re one who like to invest in track record, say hi.

If you like hot sectors, hi. Third party due diligence, sup.

Most of your weed plays going around today, even right at the top, (what’s up, Aphria) are selling you on a promise and sometimes a prayer. You’ve got to put a lot of faith in that management will figure out how to achieve what they’re promising.

Gerstenecker doesn’t want your faith. He’s already delivered. Now it’s just a question of how big it’s all going to go from there.

There are others in this space. Trackloop (TOOL.C) is looking to turn existing logistics networks into industry leading, climate controlled, GPS tracked, secure transport networks by partnering with the companies that own that tech. TransCanna (private, public soon) is emerging in California as a force there, having successfully negotiated that state’s evolving licensing and permitting rules.

If you like this sub-sector, they all deserve a look, but I think even the people running those companies would acknowledge that 3 Sixty is a beast. 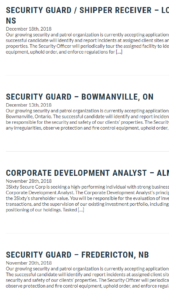 And if you’re not convinced, take a look at their job postings page, which is deep with positions being filled as we speak.

New listings sometimes take a while to get started, with financial data taking a few days to filter to all broker sites, but I expect there’ll be a lot of interest in this one, and I’m eager to see if they can continue to grow it at its current rate.

FULL DISCLOSURE: 3Sixty, Trackloop, Invictus, C21 Investments, Livewell, TransCanna, and 1933 Industries are all Equity.Guru marketing clients, and the author owns stock in several of them.