Sproutly (SPR.C) has contracted the services of a marketing and IR firm to spread the word about their brand.

This comes in anticipation of Health Canada’s recently released first draft of regulations, wherein cannabis products, including edibles, topicals, extracts and cannabis-infused beverages, will effectively be legal for sale and consumption no later than Oct. 17, 2019.

Their offices in both Toronto and Montreal allow Hybrid enough reach to cover both the US and Canadian markets, which Sproutly hopes will provide them an edge in October when their cannabis-infused beverages go live.

Hybrid will enjoy compensation of $14,000 a month as well as an option to buy a maximum of 350,000 company shares, awarded in two installments, with 50 percent set within a week of the commencement of the agreement, and the remaining balance filled out in April, 2019.

The options carry a five-year expiry date, and will be exerciseable at market place when awarded.

In 2018, Sproutly cracked the code for water-soluble cannabis, allowing it and their lab coat division, Infusion Biosciences, to expand out of the cramped Canadian dried flower and edibles markets and into a smaller financial HOV lane of cannabis-infused beverages.

Their flagship product is called Infuz2.0. 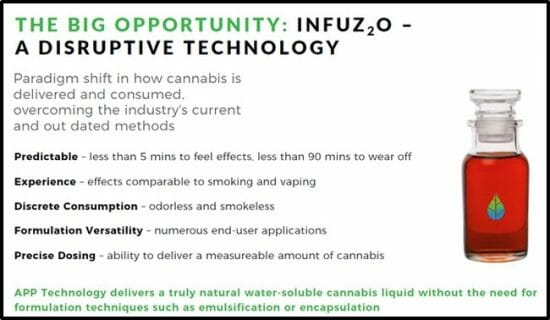 According to a 2017 Health Canada survey, only three per cent of cannabis users said they consume pot in a liquid form.

While the answer won’t definitively be known just how Canadians will react to the new product until sometime late in 2019, and possibly a few months after that, it hasn’t stopped speculators from speculating or companies from positioning themselves to mop up excess demand.

Cannacord Genuity (CF.T) estimates that the cannabis-infused drinks sector could easily be worth USD$600 by 2022. Molson Coors (TAP.Z) is going all in for October’s legalization, joining forces with Hydropothecary (HEXO.X) for a 2 million square foot operation to grow cannabis.

Constellation Brands (STZ.Z) made a sizeable investment in Canopy Growth (WEED.T) to ensure they didn’t get left behind when October comes. Even Coca-Cola (KO.Z) is in talks with Aurora Cannabis (ACB.T) about getting back into their original line of business – of putting drugs back into Coke.

Here is Keith Dolo, CEO of Sproutly, to explain what Sproutly is all about:

The final question and really the only arbiter of how well it will do in the Canadian market is, of course, what will it taste like?

“The focus of the Company has been to develop products that will distinguish our functional beverages from cannabis/ hemp beverages developed by our competitors. Our competitive advantage is to leverage the suite of proprietary water-soluble technologies we have acquired, and create a line of consumer products that taste great and have a functional purpose.  Our beverages not only cater to the emerging cannabis market but also to the large, functional beverage market that exists today,” Dolo said.

Sproutly is also among the first in Canada to introduce cannabis and hemp ingredients recovered from the plants water-soluble form, and therefore could be potentially combined with other water soluble micronutrients, such as vitamins, minerals, antioxidants and other natural plant chemicals.