Wealth Destruction: There’s a concept for ya. Sadly, it’s one many of us are intimately familiar with here in the junior exploration arena – the potential for high reward comes with that elevated risk. I searched for a proper definition online and wasn’t satisfied with any of the offerings. Perhaps it’s best described with a visual – try this… 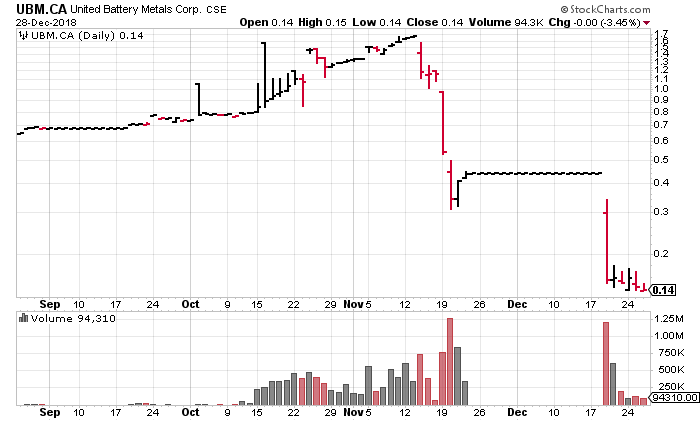 To be fair, there are dozens of charts in the junior sector sporting similar patterns of accelerated price decay. The stories usually follow a predictable plotline:

Of course, there are those that follow a decidedly different script – one co-written by outside entities.

United Battery Metals (UBM.V) was recently featured here in the pages of Equity Guru by our own Chris Parry. Parry wasted no time getting to the crux of the matter, telling it like it is:

I don’t know what’s worse, getting crushed or bleeding out. Parry continues:

“The reason is simple: UBM was turned into a pump and dump. Not necessarily by the company’s management team, or any stock holder you or I could identify, but someone loaded up, they kicked in a ton of promo campaigns, and then they just BURNED it to the ground selling out of the thing.”

This sordid tale all began on Nov.11 when UBM engaged BullVestor Medien GmbH to assist in building awareness and to provide communications support for the company to a German audience.

It’s important to note that not all marketing awareness programs are created equal. Some ride the line between right and wrong, good and evil. Some cross it. Again, back to Parry:

New readers should probably take an education break about now to understand that small companies on the stock exchange, commonly known as penny stocks, will use market awareness programs to help investors find them, learn about them and, if all goes well, invest in them.

That’s the business we’re in.

When we do it, we tell our client companies in advance that we will include them in the conversation when they engage us, but we won’t necessarily be nice to them. They have to earn their stripes, and that helps us establish integrity with our audience. Many of our clients have been on the wrong end of this coverage, but we believe it compels them to do better, and establishes a connection with investors that allows them to feel confident in what they invest in, when they actually do invest. We call it ‘consulting journalism.’

If you disbelieve that’s how we do business, see the page: Are You Guys Pumpers for more details, and for a list of stories we’ve written that booted our clients around.

What transpired after UBM’s decision to engage Bullvestor is enough to put you off your food. At the expense of the German audience it was seeking to attract, this bullshit marketing campaign:

I feel for those attempting to navigate these treacherous waters for the first time, without a proper map and compass. Those that bought into the hype prior to the November trading halts must be feeling a lot like this guy…

There’s more to this story, much more. Chris Parry, a fount of wisdom on these matters, details the duplicity behind Bullvestor, Inult.com, and Helmut Pollinger. His UBM expose’ is worth a read. If you’re new to these arenas, take your time and read twice.

With the IIROC imposed halt lifted, UBM is back trading after issuing the following news release dated Dec. 19:

You don’t have to be a Jack Schwager Market Wizard to appreciate the damage done here. Keep in mind that the stock was trading north of $1.60 two months ago.

When the starting gun sounded on Dec.19, it was a race to the bottom… 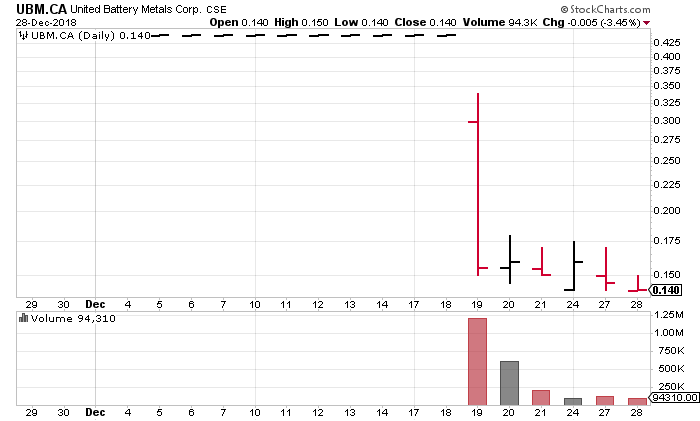 The company went on to state that it has commissioned SRK Consulting to prepare “a current technical report” for the Wray Mesa Property which will be filed on SEDAR in the first quarter of 2019.

Fair enough, but word out of that second-rate German marketing firm had UBM on a tight schedule to begin producing vanadium within the next 24 months. The fact is, UBM doesn’t even have a compliant NI 43-101 resource.

For those new to this space, you need a compliant mineral resource before you can even begin thinking about mine plans. The time chasm between both camps: years…

I’m trying to be objective here. I went to UBM’s website looking for some basic info – you know, share structure, news releases, a corporate presentation, a decent summary of their flagship asset. There’s not much there. It’s pretty lean. There is this video, however – note the production value…

Though Robert Friedland has nothing to do with the company, he’s featured prominently in the intro to this video. This was intended to add validity to the company’s vanadium potential, I suspect. At around the 2:50 mark, when the power chords kick in (lame soundtrack fellas), we learn a little about the company’s Wray Mesa project in Colorado.

Didn’t the company retract these numbers on Dec. 19?

WTF are they still doing on the company’s website, front ‘n center?

Back to the query posed in the heading above – Is this it? Is it time to buy UBM now that it’s valuation has been decimated from a $42.6M high registered < 2 months ago to its current $3.55M?

I can only speak for myself: I’m an old-fashioned kind of trader/investor. I like to run my due diligence and check off my boxes as I go. I HATE spending an inordinate amount of time pinning down the most basic answers to my questions. And that’s another reason why I have to give this one a pass.

“When in doubt, get (stay) out” – a strategy that has worked for me time and again.

Full disclosure: we have no dog in this fight.