According to the release, E3 Metals intends to use the money to fuel its pursuit of commercializing its proprietary lithium-extraction technology.

Each unit was comprised of one common share and one common share purchase warrant. Every warrant entitles the bearer to purchase one share at an exercise price of $0.60 for up to 18 months after the date of issuance.

Company officers received stock options for the purchase of up to 175,000 shares in E3 Metals at $0.40 each for up to three years after issuance.

This cash injection via private placement hits just as lithium spot prices begin to stabilize. It’s been a hard year as miners turned up production levels and China retracted many of its subsidies toward EV manufacturing.

However, as the following graph shows, global supply predictions don’t always come to fruition. This last year has been no different and demand continues to climb. For example, Tesla’s (TSLA.Q) pot-smoking CEO plans to increase the company’s EV production to one million cars annually by 2020. 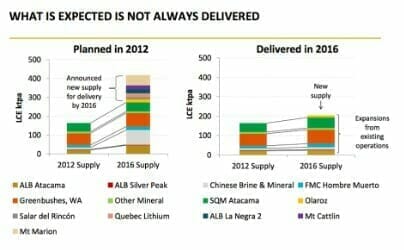 The International Energy Agency (IEA) predicts that the global EV fleet will grow from approximately 3.1 million in 2017 to 125 million by 2030. If all these vehicles use the same amount of lithium in their batteries as Tesla, we would require 5,625,000 tonnes of LCE. 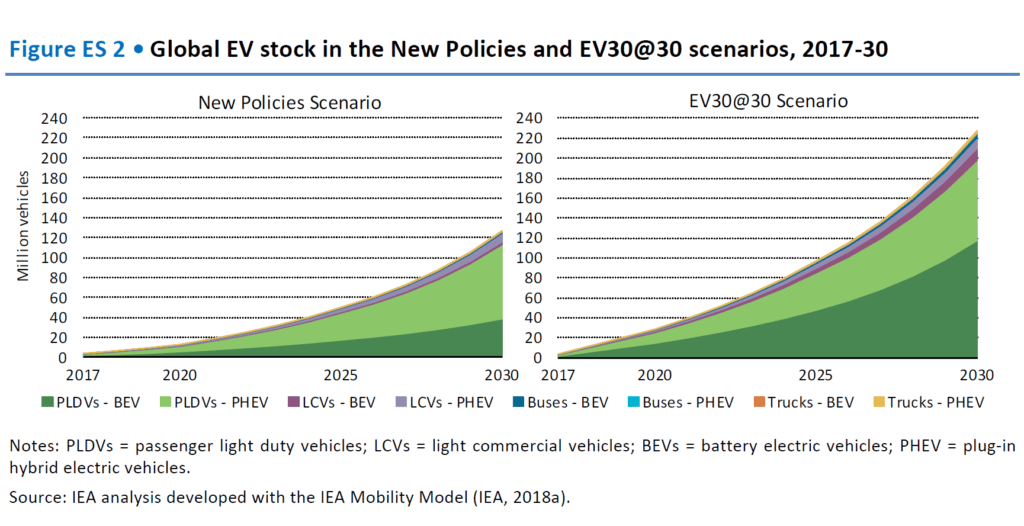 Despite what Morgan Stanley (MS.Z) said this year about lithium in it’s report “The Long Term Pain of New Supply,“ the market seems to be maintaining a balance as it heads into a growing wave of international demand.

Everybody is getting on board the lithium train

Auto manufacturers like Telsa, GM (GM.Z) and BMW (BMW.ETR) have seen the writing on the wall and are stepping up their EV game by cutting deals for large scale battery production.

It’s not just the manufacturers, energy companies are beginning to pivot as well with oil producers like BP dumping money into research to develop battery technologies capable of charging your EV in five minutes.

As such, lithium producers will continue to be in demand and as commercial battery consumers like Tesla scramble to secure a safe domestic supply of raw material, North American lithium projects will receive more attention than ever before.

E3 Metals, with its enviable portfolio of lithium properties in Alberta, has control over 6.7 million tonnes of lithium carbonate (inferred) and a proprietary extraction technology it was able to prove out this year.

According to the EG article penned by Greg Nolan, E3 CEO, Chris Doornbos had this to say about recent test results of the company’s innovative extraction process:

“The increased performance of the ion-exchange material demonstrates that E3 Metals continues to be on the right track with its proprietary technology. The ion-exchange sorbent, and continual scale-up of this process, is the last key development prior to outlining a full cycle process flow sheet for lab-scale production of lithium hydroxide. While we continue to push for increased performance of the technology, the Company is confident that it is in a position to achieve its goals outlined above.”

As 2019 fast approaches many industry pundits are painting a brighter picture for lithium in the face of the energy mineral’s considerable mining development challenges.

“The lithium industry is facing a wall of electric vehicle demand. Lithium prices have been high and sustained for many years now – something that those outside of the industry did not expect back in 2015. We have shifted from an industry being influenced by supply side problems to a demand driven story. Electric vehicles are now beginning to impact the lithium supply chain.”

What does this mean for the sector and its investors?

Demand is growing exponentially and new mines aren’t coming online as fast as predicted. This will mean a tight market through 2019 until prices once again climb in 2020 and 2021 when auto manufacturers’ promises become reality.

If juniors like E3 Metals can weather the current storm and perfect its extraction technologies, the lithium explorer may just end up on the M&A radar of lithium-hungry manufacturers. All that’s left is the execution.