Weed stocks have been in down cycles before, but have always traditionally had sustained periods of irrational exuberance shortly thereafter, so folks would be forgiven for viewing the current slump in that sector as nothing to be concerned about.

But there are plentiful signs that this downward trend may stick around for a while.

But, mostly, we’re seeing the early stages of capitulation from weed stocks – and weed investors.

Canada House Wellness (CHV.C) announced this morning that they got a cannabis sales license. This would normally be cause for champagne corks to be fired about the boardroom and market caps that soar into the $100m range.

But CHV, even after a 36% share price jump on the news, boasts a $24m market cap at the time of writing.

To put that into perspective, in late 2014, a cannabis sales license was considered to be worth $30-40m. We’re four years on, and just had a year where 20k sq. ft. grows were being valued in the low-to-mid 9-figures, and CHV, after all the work getting here, is now only considered to be as valuable as Emerald was back in 2014.

To see capitulation by a company, look now further than Emblem Corp (EMC.V), which has long been one of the worst performing cannabis producers in Canada, from a strictly stock perspective, even through all the crazy valuations of the last few years.

After a year spent in a seemingly self-imposed vow of investor relations silence, which saw its stock price slide off a cliff in 2017, a volley of pundit mockery around a year ago finally nudged the company into activity, with JVs and acquisitions and new products and financing.

But that hasn’t gone real well either. Emblem missed the train, and has spent the last year chasing it. 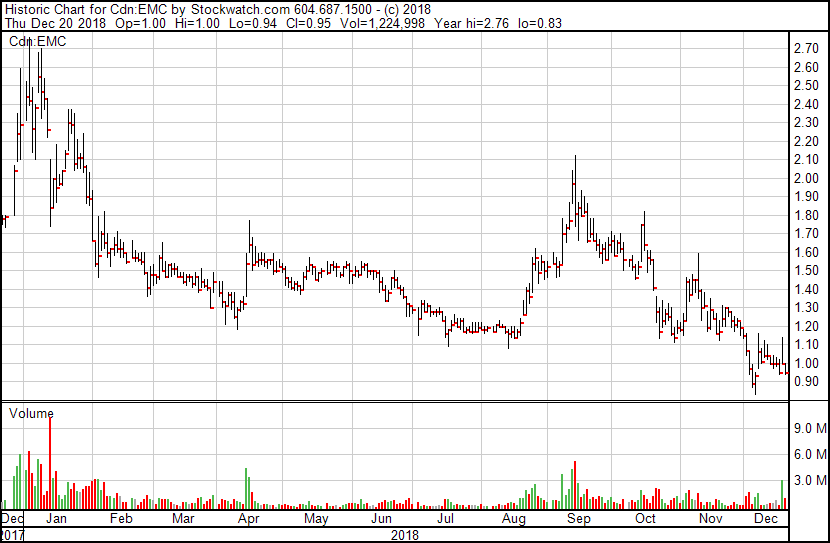 Despite being an early and large LP, despite having pharma heavyweights on board and no shortage of dollars, Emblem never looked comfortable as a public company, overreacting when it needed to stand resolute, and refusing to engage when engagement was required.

To be fair, investors never gave it much credit, nor support. To be fairer, Emblem never seemed too bothered with attaining either.

Last week, Emblem capitulated. Faced with historic share price lows and no obvious path forward, they took a buyout offer that was, to put it bluntly, diabolical for investors.

$1.21 per share was the equivalent announced by Aleafia (ALEF.C) in a $173m all-share deal that EMV management were quick to say yes to.

The agreement calls for Emblem shareholders to receive 0.8377 of an Aleafia common share in exchange for each Emblem common share, representing the equivalent of $1.21 per Emblem share and a premium of 27.0 per cent based on the closing prices of Aleafia and Emblem shares on the TSX Venture Exchange on Dec. 18, 2018. […] The transaction has been unanimously approved by Emblem’s special committee and board of directors.

That may be the shittiest takeout deal in this space, ever, and the fact that they’re crowing about a premium ‘to the closing price’ of EMC, and not a 30-day average, tells you they know it’s a shitty deal.

It’s $0.89 less than the stock price from a month before that.

Hell, if you go back to EMC’s worst period throuigh this year, when it bottomed out in June/July at $1.20, the ‘premium’ price being offered by ALEF now is basically equivalent to that point.

What a horrible deal.

Nick Dean, President and CEO of Emblem, doesn’t think we should be looking at share price when judging his deal, “we should be looking at exchange ratio”, he told James West of Midas Letter shortly after the announcement, adding, “so we will see upside potential as Aleafia shares raise into the New Year, which we expect.”

“We’re looking at the market right now and there’s a lot of downward pressure on the category because of tax loss selling. I anticipate that in the New Year we’re going to start to see that improvement in the market place.”

Are you fucking kidding me right here?

Also problematic is this:

“We see this as probably the biggest benefit of the combination is that Aleafia has seen over 60k patient encounters, we then combine their incredible ability of bringing patients into their clinics with our Growwise capability where we’re great at education and converting those into Emblem patients.”

Yo, converting them into what the what now?

If you go to Emblem’s Growwise clinic site, you’ll not see Emblem mentioned anywhere on that site. You know why? Because THEY’RE NOT ALLOWED TO SERVE AS AN EMBLEM REFERRAL SERVICE.

Yes, we all know they do it quietly, but they’re not allowed to be seen to be doing that. As Health Canada has specifically restricted retail sales outlets, a storefront dressed up as an ‘education clinic’ that actually refers people to a specific LP is in violation of the rules.

Good grief. Perhaps it’s for the best that new blood comes in.

Management is sticking by the oft-used claim that the real value will be seen in the combination of Aleafia’s assets with Emblem’s, but this can be achieved with a partnership, without one party having to be sold to the other.

Now, what this is really about, once again, is capitulation. Emblem has surrendered.

And what’s truly amazing is, who they surrendered to are folks that, not long ago had surrender as a very real option themselves.

It was a tough brief. I’d been brought in, along with several others of my ilk, to help Canabo Medical, a chain of cannabis referral clinics, tell their story to the public markets better.

‘Better’ may not be the right phrase. ‘For a change’ my be more accurate.

Nobody knew who, or what, a Canabo was – was it a monkey from Guatemala? Or maybe a big, dumb, balding, North American ape?

I liked the people and liked the plan. But clinics weren’t something that weed investors were into back then. They wanted weed acreage and a lot of it. 500k sq. ft, 1 million sq. ft, 4 million sq. ft, Joe Weedbuyer just kept shoveling money at whoever had the biggest purchase order of double-glazing on deck.

But Canabo was looking at the long game. Only 5% of doctors in Canada intended to prescribe cannabis to patients at the time, with the rest not knowing what, or how much they should be telling their patients to use, and not a lot of clue as to how they might administer it in a healthy way. Or what it might conflict with. Or what to do about workplace use and how that may affect insurance and workers comp and aaaargh.

Canabo was set up to take on that role. Not ‘sell weed’ to patients, but to clear the logjam between folks who wanted to try it, and retailers who needed doctor-approved documentation to sell it to them.

Canabo stock did not move well. I bought some, confident in the plan and the executive team’s ability to execute, but it never went upwards in the time I was around, and social media trolls took potshots throughout for what they considered to be a bad company, mostly because it wasn’t growing ganj’.

I duly sold my stake. In hindsight, that was the dumbass move because, while Canabo didn’t kick on necessarily, it did eventually merge with Aleafia, a competitor of sorts, and found a rich vein of investor interest once that happened, reaching a $600m valuation at the high point of the combination.

Like other cannabis companies, the last year hasn’t been so kind to ALEF stock, but it holds today at a $230m valuation, from memory about a 10x return on the price I sold my stake at. Fortune favours the brave.

So here we sit again, with Aleafia having once more taken on a unit that, for all intents and purposes, is out of ideas and unloved by the markets.

For EMC bagholders, the deal isn’t so appealing, though the CEO’s claim that they now get to ride Aleafia’s upcoming wave of glory does have at least some historic value when one thinks about what Canabo eventually became when it too capitulated.

The main difference here may be Mr Dean’s belief that the current down market is only down to tax loss selling. If he’s wrong on that, his is truly one of the worst timed mergers for some time.

One thing worth noting if you’re an Aleafia fan: Buying EMC stock today, as it is down 10% from when the deal was announced, gives you the equivalent of ALEF stock (which is trading at $1.35) at $1.04.

If EMC’s share price keeps falling, eventually $1.21 will be a decent premium.

FULL DISCLOSURE: No dog in this fight but EMC baggies deserved better for their patience.