According to data compiled by Bloomberg, in 2018 Canadian weed companies triggered $12.8 billion in takeovers & acquisitions and $4.3 billion in financings.

There were some smart deals done like LiveWell (LVWL.V)’s acquisition of of Vitality CBD Natural Health Products and iAnthus Capital (IAN.C)‘s $835 million all-stock transaction to “combine with MPX”  – and a couple of head scratchers.

“One of the most important things to do in M&A is identify the value drivers,” continued Nicholls, “If Company A is buying Company B, why are they doing the deal? It’s good to identify three, four or five key reasons why they’re doing the deal.”

One of those “key reasons” is price.

You buy something because a. you want it and b. you think it’s a good deal.

In the last 3 months, the Canadian Marijuana Index has lost almost half its value – falling from 869 to 461. 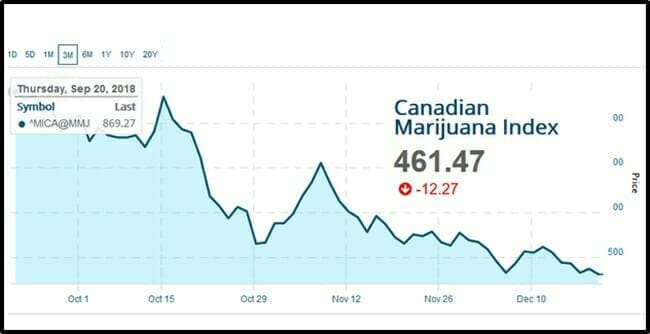 Rapidly falling valuations make it harder to get a deal done. Example: Let’s say you were planning to buy Namaste (N.V) 3 months ago.  The stock was trading at $3.74 and the company had a market cap of $1.15 billion.

Amped-up by CEO Sean Dollinger’s bullish growth projections – you agree to pay a 30% premium to market – about $1.5 billion in total.

As your M&A team does due diligence, and the purchase agreement bounces back and forth between legal teams, Namaste share price slides hard. Three months later, the stock is trading at $1.02 with a market cap of $313 million.

As the investment community sours on the weed sector, some of these proposed mergers are starting to go sideways.

The LOI stated that Golden Leaf shareholders will receive .1203 shares of Terra Tech for each Golden Leaf share – creating a combined company that will control 41 permits across cultivation, manufacturing, distribution and retail spanning Oregon, California and Nevada.

On December 18, 2018, GLH issued a terse press release stating that it has “decided not to pursue a potential transaction with Terra Tech.”  In the 48 hours following the aborted deal, Terra Tech’s share price spiked 30%, while Golden Leaf’s drifted down 8%.

When the goal posts move (valuations change) sometimes – if both parties are flexible – a calm re-negotiation can save a deal.

Example: On December 3, 2019 GLH announced that it had “favorably restructured the deal terms” with Tahoe Hydroponics.

The original agreement valued the acquisition at $52.4 million consisting of $11.1 million in cash and shares worth $41.3 million. The reworked deal calls for “Issuance of GLH common stock equivalent to $16.2 million and a “two-part earn-out provision.”

Perhaps not coincidentally, both companies shed 40% of their respective market caps in the previous 3 months.  In a stock transaction, if one company dives while the other spikes during due diligence – it incentivises the rising company to kill the deal.

Despite the challenging landscape, consolidations are still getting done.

On December 19, 2018 Aleafia Health (ALEF.V) announced that it will be buying Emblem Corp (EMC.V) in “an all-stock deal worth $173 million” to create “the largest network of medical cannabis clinics across Canada.”

Royal Bank of Canada’s investment-banking division, RBC Capital Markets recently announced that it will participate in “arranging takeovers for companies in the marijuana industry.”

“We were being careful around cannabis,” admitted an RBC spokesperson, “It’s safety first here.”

The lesson for cannabis investors is: “Do not bake announced mergers into your investing decisions until those mergers are consummated”.

Cannabis companies are “all technically start-ups,” observed the M&A expert Nicholls. “Even some of these billion-dollar companies. And when it comes to buying start-ups, it’s a whole different can of worms.”

Before GLH bailed on the deal with TRTC, it warned shareholders that “Consummation of the transaction is subject to a number of conditions.”

“If you agreed to do a deal for shares at $0.30 and the price is now $0.14, you’re definitely going to have some discussions,” stated Equity Guru’s Chris Parry on a company back channel.

Full Disclosure: Emblem used to be an Equity Guru marketing client. LiveWell still is. We also own stock in LiveWell. We have no commercial relationship with the other companies mentioned in the article.

Thank you for this educational article. Do you know why Livewell isn’t trading?

Gold Junky, although there appears to be no notification on the TSX money website, you are right LiveWell stock is halted. I just had a chat with LIveWell. Apparently the exchange is looking at the Vitality deal like a reverse merger, so they (the exchange) are reviewing Vitality’s documents in detail. LiveWell anticipates that process will end between January and March, and then the stock will start trading again. Oy. We must be patient. I’m glad you enjoyed the merger article. Merry Christmas to you from the mountains in China.

Just wondering what your take, based on the other “mergers/deals” discussed, on the GTEC – Invictus deal… might it be better for GTEC to drop the deal as they are being dragged down by the decline in Invictus share price.

Well, GTEC’s price isn’t exactly inflating the deal. I think once we see things settle down, you might see this deal, and others, reformulated to make sense.