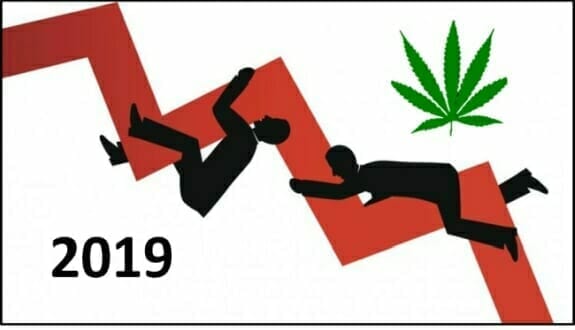 What will happen to Canadian weed stocks during the 2019 U.S. recession?

A galaxy of hard data suggests that the U.S. will enter a recession in 2019.

In a minute, we’ll talk about what cannabis investors should do to prepare for that – but first – here’s why we are so confident that the U.S. economy is about to do a face-plant.

One of the key predictors of recessions is the ratio of household wealth to income. The Fed publishes this data 4 times a year, and it is rising to boiling point – as it did the last two recessions.

Since 2009, household wealth has risen 200% – fueled by a 400% rise in stock prices and rising real estate valuations.

Median household income, however, rose less than 1% per year over the same time frame.

In other words, people are “wealthier” (on paper) – not because of anything they invented, or did or created – or because they have negotiated higher compensation from their bosses. They are wealthier simply because the stuff they own rose in value.

Note: in the graph below, the Y-axis is inverted from the norm.  As the wealth/income ratio gets higher, the line moves DOWN, not up. 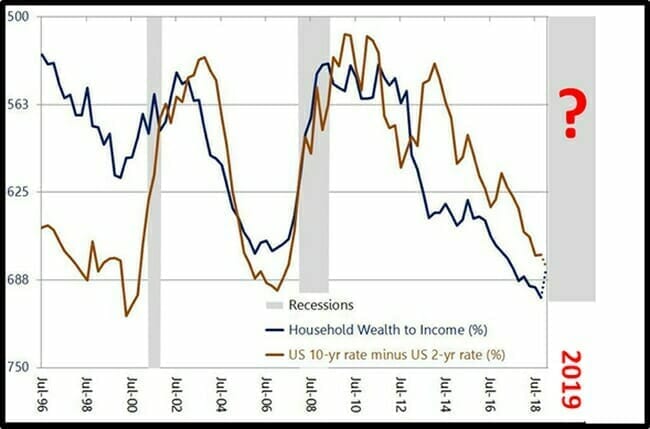 Juxtapose the blue line depicting wealth/income ratio with the light grey bars marking recessions, and you can see what is about to happen.

When the U.S. enters a recession next year, Canada will experience a significant economic slowdown (we may avoid a recession).

Twenty percent of Canada’s GDP is derived from exports to the U.S.  We truck a higher dollar value of goods to Michigan than we do to all of Europe.

To determine the likely fate of cannabis investors, we will have to draw free-hand, because during the last U.S. recession (in 2008), there were no Canadian weed companies.

This last category is most obviously linked to cannabis consumption.  Unemployment leads to self-medication.

In the 2019 recession, cheap beer makers like Anheuser-Busch (BUD.NYSE) will do better than craft beer consortiums like Brew (BREW.NASDAQ).

The big question is: if you are unemployed (or stressed about money), do you want to 1. get drunk or 2. Get high?

That’s a trick question: the answer is clearly “both”.

As a cannabis investor looking down the barrel of the next recession, you want to ask yourself:  is my company only growing/making/distributing luxury high-end recreation cannabis products?

If that is the case, the stock may be in for a bumpy ride.

However, the booze-weed comparison only goes so far.

Cannabis has the medical wild card.

Generally, people consider healthcare spending to be “non-discretionary” – so it is the last item to be cut from the weekly budget.

We expect sales of medical cannabis and CBD oil to be largely unaffected by a U.S. recession.

It is possible to market and sell high-end cannabis products in a recession, but it will take ingenuity.

Coating cannabis in chocolate is one strategy.

“There is evidence going back to Freud, showing that in times of anxiety and uncertainty, people turn to chocolate,” stated one researcher at The Institute of Management Development, “That’s why when the economy is bad, chocolate still sells well.”

As an emerging sector, the biggest negative affect a U.S. recession will have on cannabis stocks is decreased access to capital.

The weed companies that are doing well are raising lots of money – and buying things.

According to Pricewaterhouse, during the last recession, venture funding plummeted 50% – dropping to the lowest total since 1998.

The ambitions of most cannabis companies depend on access to capital.  You can not, for instance, open 30 medical weed dispensaries without a sizable injection of cash.

Cannabis companies with bulging treasuries will have a significant advantage, as they can survive a downturn while picking up new assets at discounted prices.

Although the U.S. Congressional Budget Office is crowing about healthy GDP growth & employment – veteran investors know that recessions always sneak up and bite you in the ass exactly when you have reached peak smugness.

The 2019 U.S. recession will deliver an unpleasant jolt to the frontier cannabis sector, but as most weed companies exhibit both “sin stock” and “healthcare” characteristics, the blow – in most cases – will not be lethal.

The galaxy of data is a bs yahoo article ?
Actually the data shows that the recession was supposed to be 4 years ago so noone knows what is going to happen. Just another article in a million calling for a recession because someone must get it right one day.

Ren, thank you for your insights, you are brilliant, bright shining light.