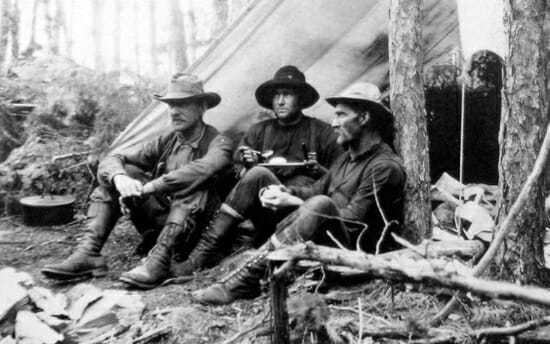 If you’re expecting news from your junior ExplorerCo and management chooses a Friday afternoon to drop said news, prepare to swallow hard – Friday afternoons are usually reserved for sob stories. It’s an ideal time slot to shovel out crap news with the benefit of a weekend to help dilute the negative impact.

Canada Cobalt Works (CCW.V) released an eagerly awaited drilling update from its Castle Mine Property late in the afternoon on FRIDAY, December 14th. Come to think of it, this is the second time in as many months CEO Frank Basa issued important news during that unconventional time slot. I don’t know if it was intentional or merely coincidental, but if it’s the former, I dig CEO Basa’s style.

Who said Friday news drops have to suck?

Stepping back in time a bit – the evolution of a new discovery:

On July 31st, while scouring the Castle mine property for new sources of mineralization, CCW field crews honed in on a large circular basin approximately 1.5 kilometers east of the Castle mine site.

On August 31st, the company upped the ante when it mobilized a drill rig to the new target for a phase-one 2,000-meter drilling campaign.

Then on October 24th, the company unveiled the following bit of intrigue:

The crux of the news:

“Cobalt Works Inc. is pleased to announce that drilling 1.5 km east-southeast of the Castle mine, in an under-explored area prospective for a new deposit type, has intersected well-mineralized felsic Archean units at a downhole depth between 77 meters and 163 meters as well as mineralized mafic to ultramafic units above and below over significant widths starting from surface.”

In describing this 86 meter mineralized interval, the company went on to state:

“The upper 77 meters of the hole is a coarse-grained, variable-textured and apparent cumulate gabbroic body (crystals up to 1 cm diameter) with disseminated pyrite throughout. From 77 meters to 163 meters is an intensely-altered, silicified and pyritized zone of felsic rocks unlike anything previously intersected at the Castle Property. Below the highly silicified unit are mineralized mafic to ultramafic units. Mineralization in these units consists of four distinct horizons featuring up to 1-cm diameter, coarse-grained blebby sulphides.”

The door suddenly swung open to the possibility of a significant new discovery.

The news released on Friday, December 14th amped-up the level of intrigue:

These new drill holes follow on the heels of hole CS-18-15 (an 86 meter interval of intensely-altered, silicified and pyritized felsic rocks unlike anything previously intersected at the Castle property).

Drill hole CS-18-16 was a big stepout from CS-18-15. It was a bold move on the company’s part. It was collared 112 meters to the northwest and drilled in the opposite direction toward the south.

“Be bold and mighty forces will come to your aid” – someone almost famous once said that.

CS-18-16 intersected much more quartz veining in several broad mineralized zones containing moderate to strongly disseminated pyrite (often associated with gold in the district) and occasional traces of chalcopyrite. Multiple alteration styles included green carbonate, sericite and fuchsite. This hole encountered a fault at a vertical depth of approximately 200 meters. A 37-meter zone of extensive multi-generational quartz veining with abundant fine-grained plus blebby pyrite and traces of chalcopyrite was intersected immediately below the fault in a wedge hole (CS-16-W).

It’s interesting to note that CS-16-W is a wedge hole. After hitting a structural fault at 200 meters, the company drilled a wedge – a technique of altering the course of a diamond drill hole in a desired direction. Tricky business. This crew is good.

“The Archean rocks at Gowganda have never been systematically explored as previous work in the area focused on exploiting the silver-rich Nipissing diabase while bypassing the cobalt. Drill holes CS-18-15, CS-18-16 and CS-18-16-W (wedge hole) east of the mine are a very important breakthrough and now have us seriously investigating an apparent gold system with appropriate sulphide and quartz veining in association with a major fault that may be the controlling fault for the zones we’ve encountered. Oriented core drilling will allow us to identify critical sub-horizontal and sub-vertical structures associated with this fault and the IP anomalies we’re drilling into.”

Management appears psyched over the potential of this new discovery. It was a no-brainer that the company would follow-up aggressively on these early results.

Geologist Robinson went on to add, “We’re also in a fertile environment for the discovery of classic cobalt-silver mineralization near zones of weakness at depth below the Archean sulphides in Nipissing diabase.”

And what impact did this late Friday news release have on the company’s share price?

The above chart is intraday. Each bar represents a 5-minute interval. Note the last few bars on the extreme right which illustrate the market’s reaction immediately after this news dropped. Also, note the corresponding volume bars on the bottom.

At a time when most brokers and traders were packing up their Murry Pezim lunch boxes and vying for a spot on the lift down, the stock surged with impressive velocity in both price and volume.

This kind of trading action bodes well for the future, even if there’s no immediate follow through.

The company also gave us an update on underground drilling activity at the Castle mine site.

Canada Cobalt is preparing to commence a second, expanded phase of underground drilling through an amended advanced exploration permit – the Company eagerly anticipates providing shareholders with a major batch of Phase 1 underground drill results in the near future following receipt and interpretation of all data.

Though phase-one drilling on the first level of the Castle mine is complete, winterizing and engineering studies are ongoing.

An expanded phase-two drilling program is scheduled to commence early in the New Year after the company digests all of the assay data from phase-one.

As current shareholders already know, there’s more to this story – much more. For a detailed look at the other side(s) of this compelling battery metals company, the following articles will help bring you up to speed:

How can you not be romantic about mineral exploration? The company sets out looking for a new source of cobalt and stumbles upon gold. Obviously, we need assays to confirm this new discovery, but I’m optimistic CCW has tagged something significant here.

Full disclosure: Canada Cobalt Works is an Equity Guru client. We own the stock.