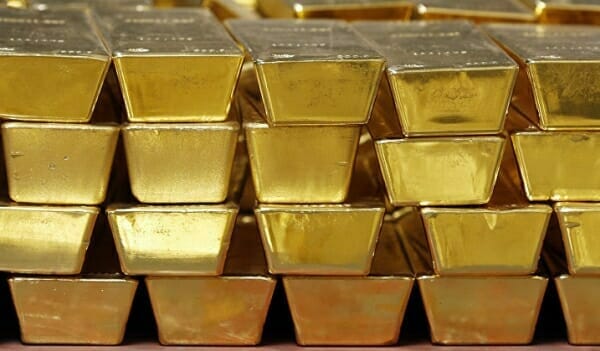 This week the U.S. Congress and Senate approved a $867 billion farm bill that puts America’s 142 million tax-payers on the hook for about $6,100 each – to be paid out over the next 10 years.

But the real winner here is gold.

To understand the implications for gold, we must do a quick forensic examination on the psyche of the U.S. taxpayer.

In a weird collective brain fart, many U.S. tax payers believe that federal taxes are a form of “wealth distribution” – forgetting that schools, roads, police have to be paid for, and there is (we hope) some ethical imperative to care for the sick, elderly and needy.

To give this historical context, the first farm bill was created in the 1930s to subsidise struggling farmers. It included a federal nutrition program – which later morphed into “food stamps”.

The 2018 farm bill allocates billions of dollars in subsidies to American farmers who have been hurt by President Trump’s trade war with China.

Republicans wanted food stamps to be harder to get – but the democrats dug in their heels and prevailed on that point.

“It is not hyperbole to call the 2018 farm bill socialism”, states Chris Edwards, Director of Tax Policy at The Cato Institute, “It includes large-scale wealth redistribution in the form of food stamps. Furthermore, the bill lines the pockets of wealthy elites (landowners), which is a central feature of socialism.”

What is important is that U.S. tax payers have no intention – or in many cases the ability – to cut a cheque to help farmers – or people on food stamps.

Any politician who suggests they have to, will be speedily removed from office.

That means the U.S. government is going to have to borrow more money to pay for the farm bill. 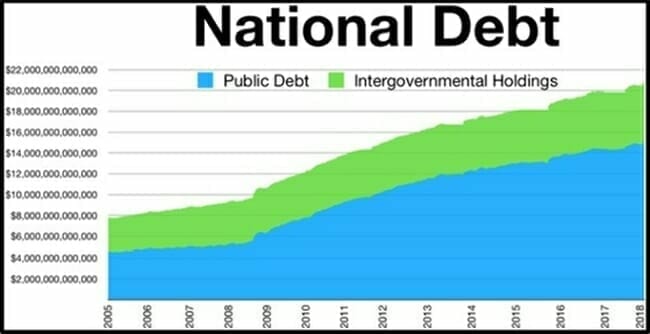 But it isn’t just the government borrowing money.

In the last 10 years, corporate bonds outstanding nearly doubled to $9 trillion, from $5.5 trillion.

In 2009, General Electric (GE.NYSE) had had a AAA credit rating.  GE now has a staggering $115 billion of outstanding debt – with a  $20 billion payment due this year. The cost of buying insurance against a default on G.E.’s bonds (credit default swaps) – has recently soared – meaning the market is baking in the possibility that G.E. might default on its debt.

And it’s not just the U.S. government and corporate America that is bloated with debt.

And it’s not just the U.S. that is addicting to spending money it hasn’t earned.

Why is all this debt good for gold?

Because 100% of the debt is based on fiat currency (paper money), and it is very easy to manipulate supply.  The U.S. – for instance – just fires up the printing presses when it can’t make an interest payment.

Gold supply is finite.  No act of Congress can magically make a tonne of gold appear on the lawn of the White House.

But unlike cryptocurrency the value of gold is buried deep in our ancestral psyche.

The Chinese love gold.  India’s population treats it as a religion.

Since the metal is indestructible, almost everything that has been mined is still around (on a ring, in a vault).

If every ounce of gold in the world were melted into a cube, it would be about 60 feet high. In 2017, global production of gold reached approximately 3,150 metric tons.

The U.S. has fallen into debt.

The U.S. taxpayers don’t want to help farmers, or unemployed people – or pay the interest on the debt.

It’s unlikely their children will.

For any U.S. politician, “higher taxes” is a losing platform.

So, the U.S. has no choice but to borrow more money to fund the 2018 farm bill, and to pay the interest on the money it already owes.

If you’ve ever tried living off your credit cards, you know this story has a nasty ending.

It is going to suck very, very badly.

For everyone except for gold investors.

Full Disclosure: We own a variety of precious metal stocks – although none of them are mentioned in this general interest article.

Well that was a disappointing article at the end with a build up. You ranted and raved about national debt, etc, and at the end you tell that you own several precious metal stocks but do not mention any, whats the big secret? That like your new bride on your wedding night saying I have a headache and turns over to go asleep.
Overall, the article was very good, there are a few items I disagree such as farmers sucking it due to trade war with China, there making money selling their product elsewhere and here at home.
So, next article, are you going to tell us the precious metal stock holdings or do I spend another night with blue balls?

Click on the blue link in the article at the end where it says “For everyone except for gold investors.”

Dave, I’m sorry about your blue balls. We are often foregrounding individual stocks, so it’s understandable that you might be waiting for stock tips. But this was a general interest article – which is why there were no ticker symbols in the title. I deliberately did NOT want to use this article as a ramp to client companies, though in the final sentence, I did link to recent article by Greg Nolan that foregrounds some gold companies I own. I hope you find a satisfying release.