Death by sandwich ingredients, or how blockchain can protect our food supply

In September 2018, the South African Listeria monocytogenes food poisoning outbreak was finally contained. By that time, 216 people had died and over 1000 people were infected.

It took approximately six months to track the infection back to a meat packing plant in Polokwane and to this day, over a year later, it is not known how the infection made it into the facility.

You might shrug this off and say, that’s South Africa for you, but US authorities have no idea which farms in Northern California were responsible for the tainted Romaine lettuce.

We have a serious problem

On one hand we have illness and death, on the other we have lawsuits and billions of dollars of needless food waste hurting both businesses and consumers.

Back in the 80s, your average North American grocery chain store carried approximately 15,000 food products. Today, that number has jumped to over 50,000.

Technology and the internet fed this explosion, creating a global supply chain that gives us unprecedented year-round access to “exotic” food like mangos, purple yams and Kobe beef.

This means supply chains are more complicated than ever before as evidenced by the supply chain behind Britain’s infamous 2013 horse meat scandal. 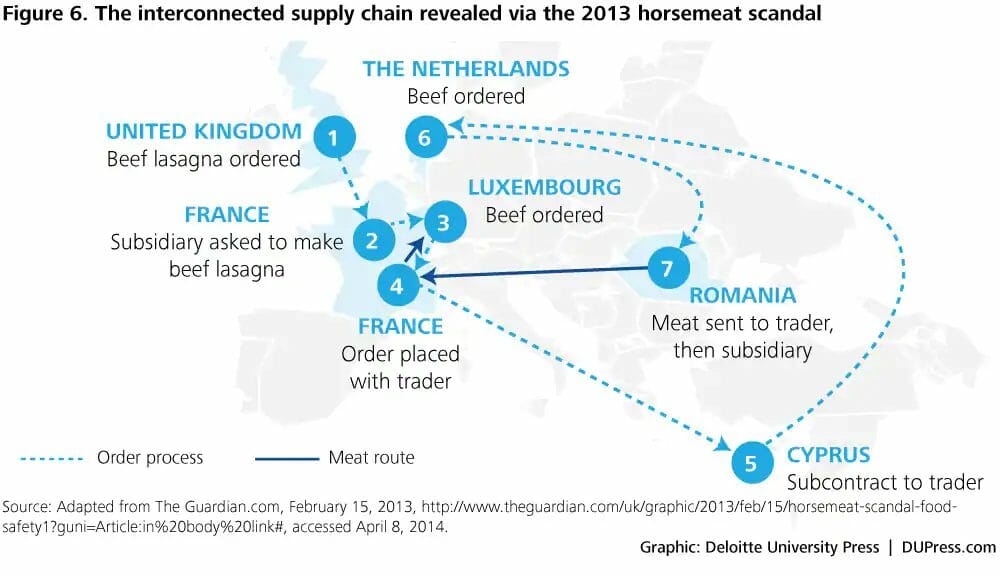 So if you don’t know what it is or where it came from, how are you going to stop it?

Blockchain technology, long known for making Bitcoin possible, is able to provide the necessary traceability and transparency to keep everyone in the loop informed and acting in good faith.

If infection did break out or if a nefarious individual sold horse meat instead of beef, the source could be tracked in a matter of seconds, not days or weeks. And not just the product but which farm it came from and when.

So what might a blockchain-based food supply chain look like? Well, GS1, an international non-profit organization which introduced the bar code in 1974, has been defining business and the language of it for over 40 years and it thinks it should work like this. 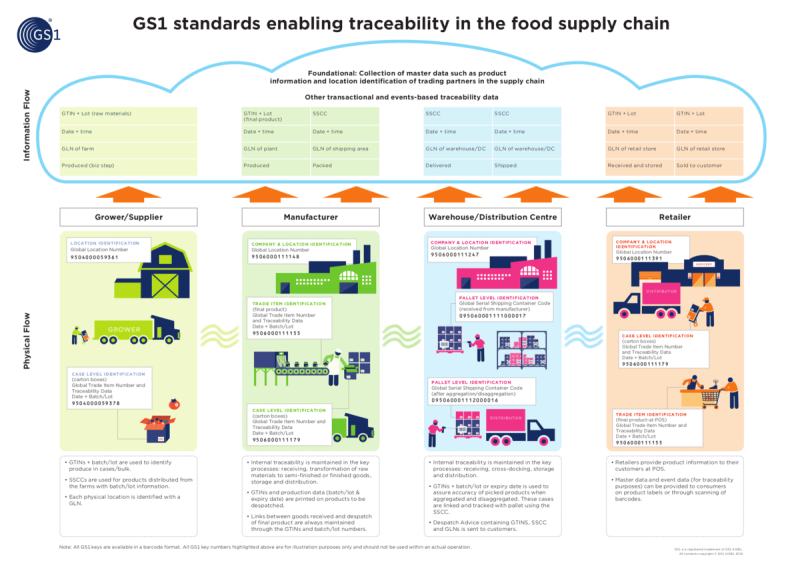 Graph Blockchain (GBLC.C), a Vancouver-based blockchain firm, has seen the writing on the wall and explains the future this way:

“By creating a permissioned eco-system through which data is recorded and shared, a trusted network is created as all stakeholders, from the farmers to the retail stores, have full transparency to the audit process.  This acts as an insurance against the negative stigma for farmers who are a part of the blockchain supply chain eco-system, as the reputational damage due to one farm or processing plant, and the subsequent ripple effect, is mitigated, whereas the current situation for the lettuce farmers shows they will struggle to regain market share after this massive recall and scare, which could have been contained and the risk to the industry avoided.”

To solidify its vision, Graph Blockchain announced today that the company was going to focus its efforts on providing blockchain solutions for the Global Food Supply Chain Management Industry (“Global Food SCM”).

Graph won’t be the only looking to gain traction in this lucrative vertical.

The world is waking up to blockchain in the food chain

Walmart (WMT.NYSE) VP of Food Safety, Frank Yiannas is a huge proponent of the idea of blockchain protecting our food supply chains and has the company working with IBM to develop a hyperledger-based answer to the billion-dollar box store’s food supply chain challenges.

Governing bodies are all over this and Graph’s been bending the ears of multiple government representatives on both federal and provincial levels. The company was also invited by the Canadian Embassy to Seoul to talk with officials about how blockchain would positively impact the safe and secure importation of Canadian beef.

The company has also been in talks with the Directors of International Trade and Investment as well as the federal trade commissioner and investment officers representing Canada in China.

When will the rubber hit the road?

Currently, Graph is building an IBM Hyperledger-based blockchain solution, but with the nascent state of blockchain’s commercial implementation, the company continues to build its expertise as it further fosters new and important relationships in the Global Food SCM,

Peter Kim, Graph CEO said “It’s exciting to be a part of this growing area, and while the application of our blockchain technology to the Global Food Supply Chain Management seems obvious from a cost savings standpoint to producers and retailers, it really goes beyond that to benefit all involved in the food system, starting from the farmers, including resources spent by government ministries such as public health offices, right down to the consumer in keeping them safe.”

Beyond saving lives, there is definite worth to this proposition and value to Graph’s focused pursuit of it as a 25 percent reduction of food born disease in the United States would save the American economy anywhere from $4.0 to $14.0 billion per year.

Blockchain in our global food supply chain seems like a no-brainer and companies like Graph Blockchain are positioning themselves to take a piece of it.