The Wayland Group (WAYL.C), formerly known as Maricann, announced their entry onto the Australian cannabis scene on December 3, 2018 by agreeing to acquire 50.1% of privately held Tropicann for an initial sum of CAD $4.8 million and a further payment of CAD $24 million should certain milestones be met, including Tropicann obtaining a medicinal marijuana cultivation license.

Few details are available about Tropicann Pty Ltd, the Darwin-based privately held company which, according to ASIC company extract documents obtained by Equity Guru, was only registered on October 4, 2018. The same documents list Tropicann’s principal place of business as a unit in Darwin’s central business district.

Neither the Australian yellow or white pages have phone numbers listed for the business name. No active website is currently available. Nor can we find any social media presence.

Records indicate a Darwin-based IT services provider registered the domain name tropicann.com.au on October 31, 2018, on behalf of Tropicann.

Why has Wayland agreed to pony up $4.8 million for a company that appears to be little more than a shell?

Wayland’s stock is trading near 52-week lows.  The shareholders will rightly want to know if this is a savvy acquisition.

License grant not a given – here’s why

The legal issue raised by Twitter user @rhyscohen wasn’t clear – so we reached out and asked for clarification, which he happily provided. 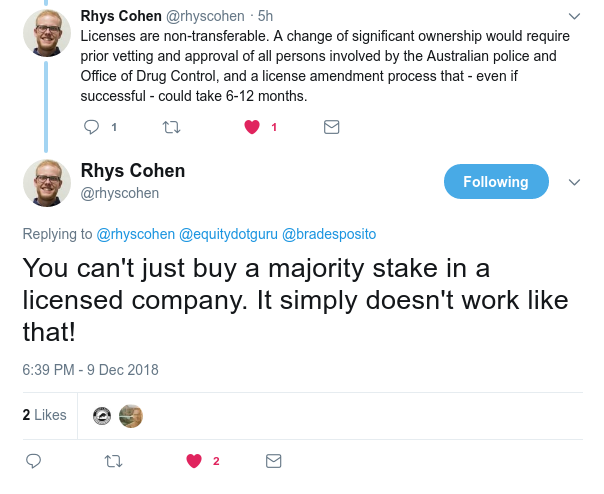 Does Rhys Cohen speak the truth?

We have no reason to doubt him as he is a cannabis industry expert who has been engaged by several domestic and international medicinal cannabis organisations and is now the Senior Project Officer at the University of Sydney’s Lambert Initiative for Cannabinoid Therapeutics.

This raises serious doubts as to whether the transaction can be completed as outlined by Wayland in the press release, and raises legitimate questions of what will happen if Tropicann fails to achieve the milestones set by Wayland as part of this agreement.

Here’s the kicker: The Office of Drug Control (ODC), responsible for doling out cannabis licenses in Australia require extensive background information on anyone applying for a license, including but not limited to, business associates of the applicant.

This, from their guideline titled “Fit and Proper Persons and Suitable Staff“.

Under the Act, ODC must refuse to grant a license if we are not satisfied on reasonable grounds that the applicant and the applicant’s relevant business associates are fit and proper persons

Wayland CEO Ben Ward has had a lot to deal with this year, including being investigated by the Ontario Securities Comission, and a recent article outlining CEO Ward’s wayward past.

Wayland’s involvement with Tropicann may prove a hindrance to obtaining the all-important license which is required before Tropicann receives the 2nd tranche of shares from Wayland.

Cloudy with a chance of cyclones. Or murder.

In a recent interview on NT Country Hour with Matt Brann, Wayland’s vice-president of communications, Graham Farrell has said “Wayland would look to grow the crop outdoors, and several parcels of land in the Top End had already been identified.”

While a trial crop has successfully been grown by the NT government in Katherine, consider the following:

The Northern Territory is the ideal location for our new Asia Pacific hub. The location provides Wayland with ideal climate conditions

Cyclone Tracy devastated the city of Darwin in 1974.

Luckily casualties were confined to a number of trees, cars and a McDonalds sign.

Should the transaction proceed, the founders of Tropicann are set to reap a windfall in the short space of only two months.

After NT Chief Minister Michael Gunner posted news of the deal on his Facebook page, one savvy reply from Ted Whiteaker asked the question on everyone’s lips.

So who are the lucky recipients of Wayland’s largesse?

According to the ASIC documents obtained by Equity Guru on December 6, 2018, the following persons are listed as directors of Tropicann:

Of those 10,000 shares, the four directors collectively hold a total of 4,990 – the other 5,010 shares (representing 50.1%) are held by different corporate entity: TERRITORY HEMP & CANNABIS PTY LTD.

Who are the officeholders of TERRITORY HEMP & CANNABIS PTY LTD?

When we dug deeper, here’s what we found:

TERRITORY HEMP & CANNABIS PTY LTD is a replication of the Tropicann shell, with the four directors named above together holding 100% of the ‘new’ company.

Can these four horsemen avoid a licensing apocalypse?

The Canaris family is somewhat of a dynasty in Darwin, dating back to 1913.

Edelman has serious chops in the capital markets sector, yet when he was invloved with LGC their focus was on Cuba and oil interests. It’s only since his departure that they have switched their sights exclusively on the Canadian cannabis sector.

Collectively the directors have considerable business acumen, but none of them have experience running a cannabis operation.

While data may be the new oil, clearly weed is the new gold, and these four are good at attracting other people’s money.

FULL DISCLOSURE: Wayland Group is not an Equity Guru marketing client. Given their CEO recently accused us of blackmail and extortion, I doubt they ever will be. The author has never traded Maricann/Wayland securites long or short.