It’s all gone pear-shaped over at Aphria (APHA.T) a day after a short report was filed by Quintessential Capital Management, following up on an earlier short report by Hindenburg Research.

In the report, admitted short sellers claimed they’d traveled the globe looking for companies and properties Aphria purchased, sometimes from companies that board members owned a piece of, only to find Truman Show-like fakery.

Here’s the video of the original conference presentation. It’s a bit damning.

Too long? Abbreviated, from Stockwatch:

The Globe’s Christina Pellegrini writes that Aphria’s stock plunged $2.91 to close at $7.60 on Monday, erasing the gains it made in the past year, after Gabriel Grego — who runs a fund in New York called Quintessential Capital Management and co-authored the report — presented the allegations Monday at a short-selling conference in New York. In July, Aphria said it would issue nearly 16 million shares to purchase a company that owned stakes in three cannabis entities in Jamaica, Colombia and Argentina. The seller — then-named Scythian (now Sol Global) — was still in the process of finalizing deals of its own to buy the foreign assets from three privately held Canadian firms for what ultimately turned out to be less than a third of what Aphria would end up paying. On Monday, the short sellers claimed the valuations of those assets “appear to be vastly inflated or outright fabrications.” Aphria said Monday the allegations are “false and defamatory.”

More, from the Ottawa Citizen:

Grego and his team claim that site visits in all three countries raised significant questions about the values of the underlying operations.

In search of Marigold’s registered office in Jamaica, for example, the report said they found an abandoned building, one which Marigold’s managing director Lloyd Tomlinson also lists as his personal address.

When it came to ABP, the Argentinian company which Aphria touted as “a successful pharmaceutical import and distribution company,” Grego provided photos of an ABP facility that appeared to just be a small pharmacy in Buenos Aires, “smaller than a conventional CVS or Rite-Aid.”

I held off writing about this news when it dropped because, frankly, short of getting on a plane myself, it would be fairly hard to prove the claims made first hand.

But Aphria’s response, I figured, would tell the world everything. If the report is untrue, they’d say how and obviously file a defamation suit and seek vast damages.

Indeed, the company did claim the report was defamatory, initially. The problem is, they haven’t put their money where their mouth is on that claim.

Instead, they spent the day buying their own stock to stop the bleeding.

With investors awaiting a full throated response, the company came out sloppy in the AM.

Aphria Inc. is aware of a short-seller report released earlier today which Aphria believes is a malicious and self-serving attempt to profit by manipulating Aphria’s stock price at the expense of Aphria’s shareholders.

Yesterday it was called false and defamatory – today we’ve moved on to malicious (true, but who cares) and self-serving (also true, but not illegal, defamatory, or wrong?).

Investors should exercise caution in relying on the misrepresentations and distortions contained in the report and recognize that, by its own admission, Hindenburg Research “stands to realize significant gains in the event that the price of any stock covered herein declines.” The report also states that, “Hindenburg Research makes no representation, express or implied, as to the accuracy, timeliness or completeness of [the information in report].”

The problem here is, neither does Aphria make any representations about its accuracy or completeness. Investors want a breakdown of what the shorters made up or got wrong or took out of context. Still waiting.

That’s it? We made a transaction that personally enriched some of our directors by buying an asset from them at a price far higher than the one they were negotiating from their own seller at the time we were buying it off them, but we got someone to sign off on that to say it was fair so, cool?

80 million shares have changed hands over the last few days. 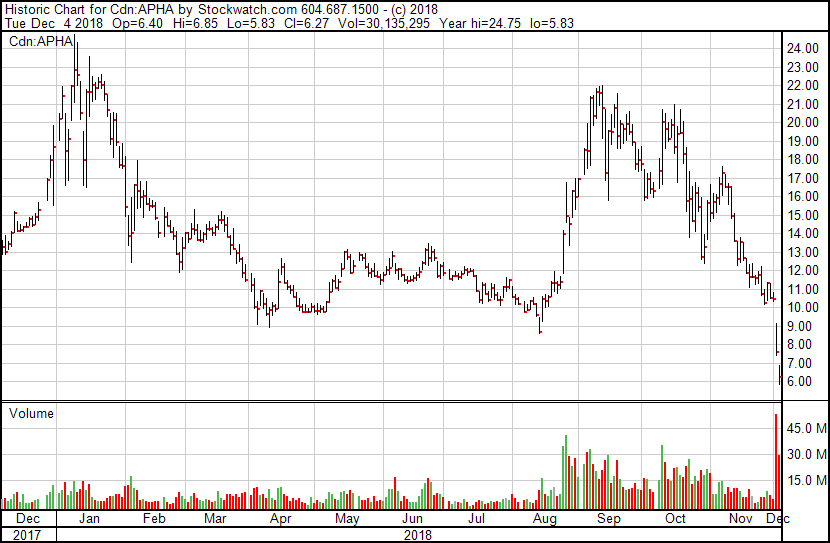 This is carnage, friends.

So the company went back into the IR room and churned out another news release, this one more detailed, but still light on refutation of the things in the short report.

Vic Neufeld, Aphria’s chief executive officer, said: “Since closing this important strategic acquisition in September, we have made considerable progress supporting and building out our operations on the ground in Latin America and the Caribbean. We have nearly 100 employees across the region dedicated to advancing the company’s business interests, including cultivation, processing, research and development, partnerships, and continued expansion. International operations are a core component to our proven growth strategy and we are working to integrate and enhance operations and product channels throughout Latin America to position them for sustainable, long-term shareholder value creation.”

In its press release announcing the transaction, the company transparently disclosed that certain insiders of Aphria owned a de minimis amount of shares and warrants of SOL and that such insiders had disclosed such interests to the board of directors and recused themselves from the deliberations during which the transaction was discussed and from voting on the resolution approving the transaction.

Considering the wildly inflated prices being paid for various items of negligible actual worth, connected to the cannabis space, just about any transaction would be considered ‘fair’ from a financial point of view.

That’s not the complaint. Should directors of a company be buying assets for pennies and selling it to their pubco for dollars?

Meanwhile, Hindenburg is piling on. This is just from the Jamaica section of their response to the company:

The company’s response: none.

DeFrancesco has been richly rewarded, said shortseller Grego. “He just buys a pharmacy for himself,” said Grego, “and sells it for $50 million to Aphria.”

Lest we forget., this isn’t the first scandal Aphria has faced. Their move to siphon government-subsidized veterans off to a separate corner of their website, where prices were all inflated, was a terrible move that took me from fan to hater.

And if the response to the short sellers so far is the ‘comprehensive refutation’ promised, it will be hard to imagine the downward spiral has stopped. 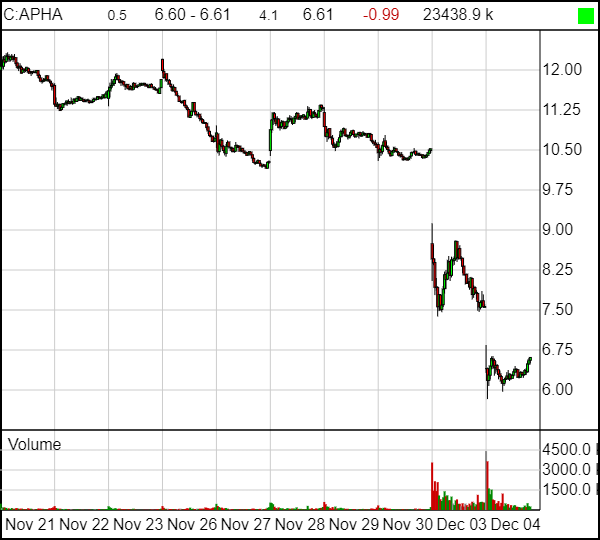 FULL DISCLOSURE: No dog in this fight, though was tempted to buy APHA on the cheap before the company whiffed on its response.