Zinc One (Z.V) outlines future plans for its Bongara project in north-central Peru 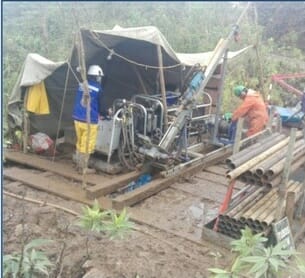 The story behind Zinc One (Z.V) and its Bongara project in north-central Peru is an interesting one. Equity Guru’s Chris Parry caught up with Bill Williams, the company’s CEO, COO and Director recently. Below are some insights I took away while eavesdropping on that convo, as well as details from a very recent piece of company news.

A bit of history…

Bongara is a past producer. Operating between March 2007 and late 2008, the mine was shut down during the financial crisis that year after zinc did its best impersonation of Rick Charls, plunging from a high of $2.00 to a low of $0.50 per lb.

The previous operators of the property mined a mere 10 – 15% of what they defined as a resource.

(Note, the above numbers represent a historical resource estimate. This resource is NOT NI 43-101 compliant)

Bongara was discovered when a geologist from afar noticed a bare spot in the jungle.

Question: why would there be a bare spot in the jungle?

Answer: because high-grade zinc is present at or near the surface and only certain types of vegetation can thrive in such an environment. In this case, the vegetation is low-lying and sparse.

Tracing the extent and limits of an orebody, even when backstopped by the best science, can be a risky and expensive proposition. At Bongara, Zinc One is able to lower its risk and stretch its exploration dollar by the use of a simple prefatory filter – target areas where vegetation is challenged.

The resource and exploration upside…

The company is on the verge of releasing an updated NI 43-101 compliant resource. Judging by some of the high-grade drill results encountered recently, I suspect the above numbers will be improved upon, perhaps significantly so.

This area has a valid current mine permit (350 tpd). It also includes outcropping mineralization, but areas with low-lying vegetation were shown to overlie high-grade, zinc-oxide mineralization under a few metres of overburden. The known mineralization covers an area roughly 350 metres in a N-S direction and 200 metres in an E-W direction. The zone is open to the south.

This area was also mined, in part, by the previous operator ten years ago. Drilling was focused on the eastern edge of a remediated area and known near-surface, high-grade, zinc-oxide mineralization. Recent drilling defined the western edge of the deposit, which is approximately 200 metres in a NW-SE direction and 125 metres in an NE-SW direction.

Grades this close to the surface are nothing short of extraordinary.

The mineralized zones highlighted above are illustrated on the following map… 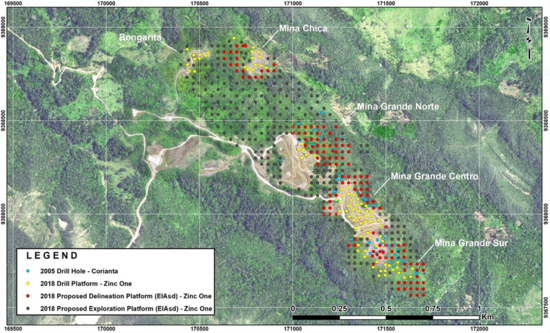 During the interview with CEO Williams, the significance of this red and black dot-grid was covered in some detail. The red dots represent delineation upside (deposit expansion) while the black dots represent Bongara’s exploration upside.

Note the 300 by 400 metre unexplored gap between Mina Grande Norte and Mina Chica, an area characterized by sparse low-lying vegetation – a good thing. Much of the ground is collapsed, which is also a good thing as the host rock for much of the area’s mineralization is cavernous, and susceptible to cave-ins. If the company is successful in tapping similar high-grade mineralization across this large area, the tonnage implications could be significant.

Zinc One has applied to the Ministry of Energy and Mining for approval to drill 583 holes from 364 platforms along a 1.4-kilometre long ridge from Mina Chica to and beyond Mina Grande Sur. The platforms planned for delineation and infill drilling of the known deposits are laid out in a nominal 30-metre grid spacing and the exploration holes on a nominal 50-metre drill grid. A total of 20, 41, 27, and 43 platforms, each platform to be permitted for two drill holes each, will delineate and, in part, infill previous drilling at Mina Chica, Mina Grande Norte, Mina Grande Centro, and Mina Grande Sur, respectively. Exploration drilling will be prioritized in favorable settings within areas of low-lying vegetation. Currently, Zinc One is addressing environmental and logistical questions posed by the Ministry of Energy and Mining, which will confirm that our proposals comply with existing regulations and allow the Ministry to grant the permit.

With a solid record of remediating previous work areas, there shouldn’t be a delay in the issuance of these new drill permits. 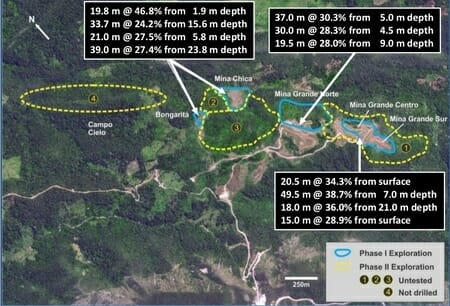 Zinc One’s exploration potential is not limited to the immediate area surrounding the five known mineralized zones highlighted above. The company is sitting on an 8-kilometer-long trend which could offer further exploration upside.

Note the one-kilometer long section on the above map called Camp Cielo (number 4). Surface work performed by previous operators in the area uncovered zinc grades that warrant a proper probe with the drill bit. The company may include this area as part of its phase 2 drilling campaign scheduled for early next year.

Regarding processing, people seem to get hung up on the subject of sulphide versus oxide ore.

Bongara’s ore is oxide. Unlike your typical flotation circuit which the industry knows and understands well, Zinc One’s oxide ore would need to undergo a process that is somewhat less understood. But it’s a fairly straighforward process, one which involves extreme heat. 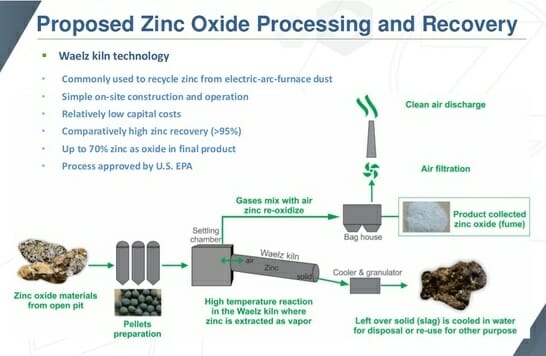 The company plans to employ a 100-year-old technology involving a Waelz kiln. This is a relatively simple process where metals in the ore are volatilized at high temperatures. By adding oxygen at the tail end of the process, everything falls out as a powder resulting in a product that runs up to 70% zinc.

The kiln doesn’t require electricity. It runs on anthracite – a high carbon coal that burns clean without smoke or odor.

The company plans to install a Waelz kiln directly onsite in order to maximize efficiency and cut costs. The local community is apparently okay the prospect of a Waelz kiln operating nearby. I can’t imagine why they wouldn’t be.

One of the benefits with this type of processing, from a community relations POV, is that the waste generated takes the form of an inert slag. There are very few waste management issues here. If the company was so inclined, they could commercialize this waste material as road aggregate.

Efficiencies – the name of the game…

As luck would have it, there is an anthracite mine near the port facility the company plans to use to sell its product.

A 20-kilometer dirt road leading to the project is already in place. This dirt road hooks up with a paved highway which takes them right to the coast. The company will ship its zinc concentrate to the coast by truck. On the return trip, the same truck will haul back a load of anthracite.

Here’s the thing: if future exploration pushes the resource block at Bongara to 4 or 5 million tonnes (not an outrageous prediction), this project is scalable. Another kiln can be installed onsite doubling production to 1000 tonnes per day. The math underlying such a scenario is compelling.

It’s important to understand that the company owns this mine. It’s fully permitted to mine certain areas of the property, now, today.

Zinc One is currently working with all the regulatory agencies, applying all the necessary protocols as if this were an active mine. While building tonnage and proving up the resource, they’re continually modifying the permits to accommodate this extra resource tonnage.

The company is monitoring all things air, water and noise. It’s a dynamic, ongoing process. In doing this – running all aspects concurrently rather than sequentially – the company can bring those new resources into the mine plan faster and with greater efficiency.

What’s the Capex for this kind of processing facilty? A large chunk of the Capex for Bongara is in the Waelz kiln itself – approximately US $40M installed.

Sustaining costs you ask? It won’t be a burden due to the near complete lack of waste management issues.

Newsflow is expected to be strong going forward:

• A resource estimate is due in early 2019 which will form the basis for a Preliminary Economic Assessment expected to be completed in late 2019.
• A second phase drilling campaign is scheduled for early next spring – that means a steady flow of drill results.
• An updated resource estimate will come at the end of 2019.
• A mine permit application would follow in late 2019/early 2020 (expected to take 9 months)
• A Feasibility Study (FS) would be initiated during that 9-month permitting process.
• The FS should be tabled at around the same time their mining permit is received.

The company anticipates a mine decision by the end of 2020.

Disclosure: Zinc One is an Equity Guru client.