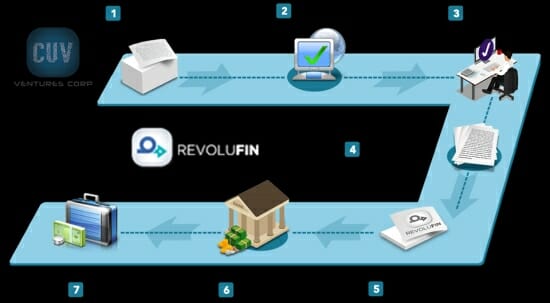 CUV Ventures (CUV.V) has started operations of their wholly-owned subsidiary, RevoluFIN, from their new offices in the Marbella financial district in the Republic of Panama.

The day-to-day operations will go to Jorge Alvarado, a CPA with 25-years experience in the upper echelons of Panamanian accounting, and now a member of the RevoluFIN advisory board.

Alvarado has previous experience working for both private and multinational companies, and also as an accountant for the Republic of Panama.

One of these companies was the Panamena de Motores Company SA, a national wholly owned Nissan importer. He also worked as a fiscal auditor for the Municipality of Panama City.

Furthermore, the company’s tech team has completed and deployed a RevoluPAY application program interface across more than 400 of the company’s 614 proprietary retail websites.

This API payment mechanism will be deployed across numerous third party platforms, including the deal with Nukondo.

Any parties requesting financing from RevoluFIN will be politely suggested to use RevoluPAY for their day to day transactions. This will add another layer of secondary loan securitization to the RevoluFIN factoring program.

Furthermore, the RevoluVIP, which is CUV’s upcoming travel club, will require the RevoluPAY application for any financial interaction with the club’s 613 GDS-powered travel websites.

This will effectively close the loop, ensuring that any revenue flow is exclusively through CUV’s different divisions and subsidiaries. How this works is that any third party working with CUV will invariably impose RevoluPAY as the means of payment.

Read:  (CUV.V): Taking on Western Union with blockchain to the Caribbean

To better explain how this works, let’s consider a real world example.

Steve gets a call from his daughter on vacation in Nicaragua asking for money while he’s at his friends house. Steve’s phone is almost dead so after the call, he recharges it using his friend’s RevoluCHARGE station, where he learns that RevoluPAY will help him to send money overseas far cheaper than Western Union.

After that, he discovers that RevoluVIP can help him get out there and join her instead of going back to his dreary 9 to 5.

Furthermore, CUV is intending on reaching out to include the hospitality, travel and media sectors next using RevoluFIN.

CUV has uncovered a new way to make remittance payments less of a hassle.

A remittance is money sent to another country by a person to their family or friends. The RevoluPAY application is a digital wallet for global transactions, making it much easier to send funds overseas to family members in need. It comes in direct competition with companies like Western Union (WU.Z) but doesn’t cost as much.

It employs a blockchain to convert cash into ₡CU, or their proprietary Cryptotoken, for easier cross-border movement, which can be withdrawn out of ATMs across Europe, Latin America and Asia.

RevoluPAY allows users of the application to: