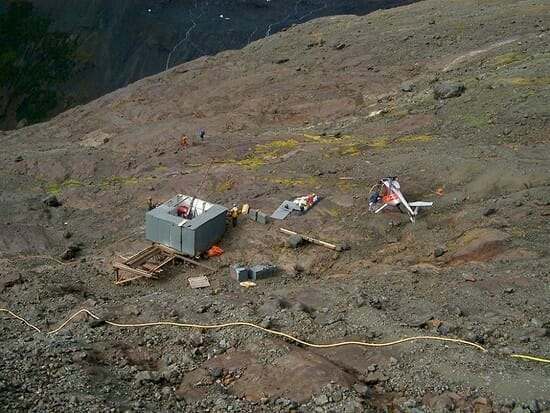 These follow-up assays from North Boundary were eagerly anticipated.

The company states that these results indicate the presence of a coherent zone of vein-hosted mineralization extending up to thirty meters outward from the high-grade gold intercepts reported in holes FK17-4,5,6 (2017 drill program) & FK18-10 (summer of 2018 drill program).

The high-grade hits reported in the summers of 2017 and 2018 (bold text) include the following:

Highlights from the November 19th news release include:

The mineralization defined by these intervals extends for over thirty meters along strike and remains open in multiple directions.

Drilling has extended the mineralized envelope surrounding the 2017 and 2018 high-grade gold discoveries at North Boundary. This round of focused drilling tested for the depth and lateral extension of known mineralized shear and vein sets located in the North Boundary Zone. Broad horizons of low to moderate grade gold mineralization were encountered in several of the 15 drill holes (FK18-22 à36) reported herein, while all drill holes encountered discrete polymetallic vein hosted mineralization with gold values ranging from trace amounts to 13 grams per tonne (g/t) over 1 meter.

It’s important to note that Aben’s drilling objectives were constrained due to a delay in receiving an updated MX permit from the BC gov’t. Extreme forest fire activity in the area prompted the delay. As a consequence, the last phase of drilling was completed from only three pad locations.

The company is now in receipt of its muchly anticipated five year Multi-Year Area Based permit. This will give them much greater freedom and control in positioning the drill bit.

In a previous Guru offering, we talked about this unique geological feature, the volcanic and volcaniclastic rocks from the Jurassic Hazelton Group that define Forrest Kerr…

Aben President and CEO, Jim Pettit, had the following to say regarding these new assays:

“Drilling to date has shown that mineralization extends several meters outboard of the high-grade area within subordinate shear structures and vein arrays. Oriented core tooling was utilized for this phase of drilling in order to collect structural data that will help determine the orientation of both the main and subsidiary mineralized structures. The oriented core data, combined with the surface mapping data and a growing subsurface database at the Boundary Zone will assist greatly in planning future targeted drill programs.”

Justin has the potential to host both high-grade and bulk-tonnage deposits within three different styles of mineralization: epithermal, skarn and sediment-hosted.

A greenfields discovery – an Intrusive Related Gold System (IRGS) – was made on the POW zone during a 2011 drilling campaign.

Aben Resources is currently finalizing analytical results from field work completed in September 2018 on its 100% owned Justin Gold Property in the Yukon Territory. The geologic team reports visible gold in trenches and channel samples from quartz stockwork veining in bedrock at the Lost Ace Zone, a gold-bearing zone discovered in 2017. Channel sampling in 2017 at Lost Ace returned 1.44 g/t Au over 5m including 4.77 g/t Au over 1.0 m in addition to a bulk soil sample that contained 1135 visible gold grains, the majority of which were termed ‘pristine’ indicating a proximal bedrock source for the gold. Lost Ace is an exciting new prospect on the Justin Property as it is located within 2km of the main mineralized POW Zone and bears striking similarities to Golden Predators adjacent 3 Ace Property.

This is a highly prospective property. It could see significant drilling during the next field season. Visible gold in channel samples along recent trenching, as well as the 1135 visible gold grains obtained from a previous bulk soil sample, elevate the prospective nature of this project. Assays from recent trenching are pending.

According to a recent SSR update, infill and exploration drilling at Seebea/Santoy included 35,258 meters from underground (in 104 holes) and 15,390 meters from surface (in 61 holes). This is an aggressive program.

Results from this recent SSR exploration drilling include the following intercepts:

Note the close proximity of Aben’s Chico project to Seabee/Santoy, highlighted in yellow (above map).

The Chico trend extends over 1.5 kilometers.

Aben has an option to earn up to 80% in the project.

Importantly, this property can be worked all year round.

Also important to note: SSR acquired the Seabee/Santoy project through its acquisition of Claude Resources in a deal valued at $337 million.

Aben is monitoring progress in the area closely. They’re tuned-into SSR’s discovery model. They should be well prepared when they put boots to the ground early next year.

The company still has nine additional holes to report from their Forrest Kerr property in BC’s Golden Triangle. But there’s far more percolating under the surface here: channel samples from Justin are on deck and Chico should begin producing newsflow early in the new year.