How to invest in climate change denial

A new U.S. government report warns that, in the next decade, climate change will cause billions in damage through hurricanes, wild fires, floods – and could shave 10% off the USA’s GDP by the end of the century.

Released in the midst of American thanksgiving – the report was prepared by the U.S. Global Change Research Program, a conglomerate of 13 federal agencies, included 300 scientists, 50% of them from outside the government.

“This warming trend can only be explained by human activities,” stated David Easterling, director of Environmental Information.

“The concept of global warming was created by and for the Chinese in order to make U.S. manufacturing non-competitive,” Trump previously stated.

Earlier this week, in the midst of an eastern cold snap he tweeted:

Brutal and Extended Cold Blast could shatter ALL RECORDS – Whatever happened to Global Warming?

According to a new Yale survey, only 58% of Americans believe that global warming is caused mostly by human activities.

“If we’re going to run this country like a business, it’s time to address climate as a threat multiplier,” stated Robert Bullard, an environmental scientist at Texas Southern University.

President Trump is good at branding, but fiscally illiterate.

He advised the National Economic Council to combat high interest rates by “borrowing a lot of money, holding it, and then selling it to make money.”  He’s gone bankrupt five times, and lost $150 million in the stock market when everyone else was making bank.

Given that he doesn’t read, listen or learn, it is possible Trump believes climate change is liberal fiction that is too expensive to fix.

In fact, as the climate report suggests, the opposite is true.

Ignoring climate change is going to be extremely expensive.

Even China (not renowned for its greenie inclinations) has acknowledged that global warming is a significant economic problem. Coal usage (as a percentage of total energy production) fell 1.6% to 60.4% last year. Clean energy rose 1.3% to 20.8%.  China is reducing dependency on coal about 1% every year.

What is China’s motivation? 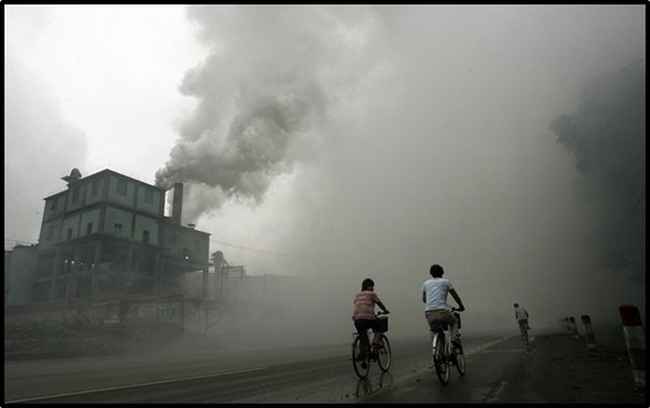 Sometime in the near future, the odds are high that the U.S. will have a fiscally literate President.

The new regime may not “respect the environment”.

But as long as it respects (and understands) money – the greening of the U.S. will continue apace.

At Equity Guru, we cover a galaxy of clean-energy companies.

Azincourt Energy (AAZ.V) is an exploration and development company which serves to satisfy the growing global demand for clean energy.

Saskatchewan’s Athabasca Basin is home to the company’s two uranium projects. The East Preston project spans over 25,000 hectares and is being explored in conjunction with Skyharbour Resources (SYH.V) and Clean Commodities (CLE.V).

The Patterson Lake North project, Azincourt Energy’s second uranium operation, is being explored in conjunction with Fission 3.0 (FUU.V). Azincourt holds a 10 percent ownership in the project.

In January 2018, the company signed a definitive agreement with New Age Metals (NAM.V) to acquire up to 100 percent interest in five lithium exploration projects within Manitoba’s Winnipeg River pegmatite field.

Azincourt has since expanded that agreement to cover eight projects in the area with a land package currently in excess of 14,000 hectares.

Blue Sky Uranium (BSK.V) is a Canadian uranium and vanadium exploration company focused on exploring the resources of southern Argentina.

In November 2018, the company reported 1 percent triuranium octoxide and 0.1 percent vanadium which it discovered through sampling the Ivana deposit which is located within the Amarillo Grande project.

Boreal Metals (BMX.V) is a mineral exploration company focused on the discovery of zinc, copper, silver, gold and cobalt throughout Sweden and Norway.

The company’s Modum, Guldgruvan and Mjövattnet & Njuggsträskliden projects all target the sourcing of battery metals.

The Modum project is located around a historical cobalt producer. It also contains coarse grained sulfide ore minerals which are easily processed at low-cost.

Boreal Metals’ Guldgruvan project is a cobalt-copper-silver project. Thanks to the project’s geology, Guldgruvan’s drill targets are exposed at surface level and easily accessible.

Canada Cobalt Works (CCW.V) is actively pursuing the production of battery metals through its three properties in the mineral-rich region of northern Ontario.

The company’s Castle Mine was one of the highest-grade silver-cobalt properties in Ontario’s renowned Cobalt Camp region. Mines in this region produces over 30 million pounds of cobalt in the 1990s. The mine spans 28 square kilometres, has an on-site cobalt concentrate pilot plant and is supported by pre-existing infrastructure.

Canada Cobalt Works’ Beaver Silver-Cobalt property consists of a 20-acre patented mining claim five kilometres southeast of Cobalt, Ontario. This property includes the Violet Mine and the Beaver mine which produced 140,000 pounds of cobalt between 1907 and 1940.

Ceylon Graphite (CYL.V) is an exploration and development company with graphite mines in the historic resource jurisdictions of Sri Lanka. The company holds a land package of over 121 square kilometres of vein graphite deposits.

The Malsiripura project is operated by Ceylon’s wholly-owned subsidiary, JADS Enterprises, which has five graphite exploration grid units in the Malsiripura/Kurunegela region in central Sri Lanka.

The K1 project is Ceylon Graphite’s flagship property. Analysis of site material from historic production showed over 86 percent carbon. The project has a drilling rig on-site, while adit and shaft refurbishment within the mine is currently underway.

Cypress Development (CYP.V) is a Canadian exploration and development company focused on developing its Clayton Valley lithium project in Nevada in which it holds a 100 percent interest.

The company announced a prefeasibility study for the Clayton Valley project was underway in October 2018.

Nano One (NNO.V) is a Vancouver-based technology company which is developing low-cost high-performance energy storage materials for batteries. The company has had 10 of its patents granted and has over 30 currently under review.

The company’s latest patent, approved by the U.S. Patent and Trademark Office, surrounds the production of niobium titanium oxide, a high-density anode with specialized applications in regards to fast charging, safety and longevity.

The 1,656-page “National Climate Assessment” report describes in precise detail how the warming planet will wreak hundreds of billions of dollars of damage in coming decades.

Note: additional research and writing for this article by Ethan Reyes.