Updates from Mexico and what the impending US ‘Farm Bill” means for Isodiol (ISOL.C) 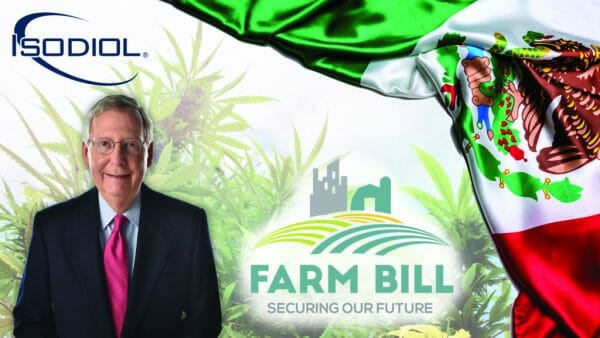 Isodiol International (ISOL.C) is poised for a successful 2019 thanks to approved or anticipated regulatory changes regarding hemp in the US and Mexico.

Industrial hemp is seeing a global resurgence: Australian farmers are cultivating it for human consumption, Chinese companies are partnering with American universities to study it and even deeply conservative US states are embracing hemp for its economic upsides.

In late October, the Federal Commission for the Protection Against Sanitary Risks (COFEPRIS) in Mexico published new guidelines for the classification of cannabis and its derivatives.

These new guidelines provide Mexico’s health authority with criteria for the evaluation of products with less than one percent THC, opening the door for medical and scientific studies of hemp and CBD.

With its entire operational focus centered on hemp-derived CBD, Isodiol could not be more pleased with this news. Mexico has a population of roughly 130 million which dwarfs Canada by comparison.

The company’s assets and subsidiaries cover every conceivable application of hemp, from its partnership with an athletic training centre to CBD beverage enhancers which flavour water.

Isodiol’s UK-Based subsidiary, BSPG Laboratories, is a manufacturer of pure CBD. The company can performing lab testing and purification, while researching the medical applications of CBD as an active pharmaceutical ingredient.

CBD-oil is completely legal in the UK provided it has no THC content and is sourced from an authorized importer.

In July, the company announced its intent to acquire 51 percent of Round Mountain Technologies (RMT) and its hemp assets in Nevada.

The company holds a license in that state to cultivate organic hemp in NYE County. RMT’s property there consists of approximately 155 acres which have already been planted.

With such a diverse breadth of hemp and CBD assets around the world, the increasing relaxation towards cannabinoids and their medical applications has given Isodiol good cause for celebration.

Senate Majority Leader Mitch McConnell has said that the passing a new Farm Bill is a top priority once Congress reconvenes for a new session in 2019.

As a senator from Kentucky, the heartland of US hemp, McConnell is also voiced his strong support for outlining hemp’s important role in the legislation.

If there is a Farm Bill, it will be in there, I guarantee that.

If passed, is expected to provide clarity on the status of hemp derivatives such as CBD, a cannabinoid with varying degrees of legality from state-to-state.

Isodiol stands to gain from further clarity on CBD in the US as the countries population currently exceeds 325 million.

The Hemp Business Journal estimates the CBD market to grow to a $2.1 billion market by 2020 with $450 million expected to be attributed to sales of hemp-derived products.

The 2018 Farm Bill failed to pass before the September 30 expiration date of the 2014 Farm Bill.

As the primary tool for outlining Federal food and agriculture policy in the US, a farm bill is passed every four to five years.

Having regained control of the House of Representatives in the midterms, Democrats can remove the food stamp work requirements which stalled the formerly Republican-controlled House’s previous bill and draft a version more similar to the Senate’s.

Fred Hoefner spoke to CNBC in October and said the Democrats’ farm bill will most likely have more in common with the Senate Republicans’ bill than the one drafted by Republicans the House, thereby making reaching an agreement easier.